Last Week: Interest rates were mixed, and equities rose modestly amid a tumultuous week. The early-Friday announcement that President Trump and the First Lady had tested positive for the coronavirus combined with a mixed September employment report briefly awakened interest rates from their slumber, where yields have held to their slimmest monthly range since early 2019. The yield on the US 10-year Treasury note wrapped the week at 0.70% – narrowly higher than the 0.66% seen this time last week – as 1-month LIBOR traded to a new low of 0.139%. The price of a barrel of West Texas Intermediate crude oil fell to $37.35 from $40, as the US Dollar weakened, and Gold strengthened. Treasury yield volatility, a big driver of the cost of rate caps and swaptions, climbed steadily throughout the week, but remains near record lows.

Is it time to terminate your interest rate swap? With all the debt refinancing and restructurings of late, we’re being flooded with calls from borrowers for help with terminating or amending interest rate swaps, defeasance and yield maintenance. For a high-level insight of what’s involved and the potholes to avoid, look for our monthly publication on the topic, DL Monitor, late this week.

America’s jobs rebound lost steam in September. America’s economy created fewer new jobs than expected last month, though the percentage of those unemployed dropped. Economists had expected about 850k positions to be filled in September (notably lower than August’s 1.49M print), but only 661k actually were when all was said and done. Meanwhile, the unemployment rate declined to 7.9% in September from 8.4% the prior month, down from a peak of 14.7% in April. In addition to the decline in the unemployment rate, upward revisions to the prior two months’ data added 145,000 jobs to the nation’s jobs total.

Our take: In what is historically the single most important piece of economic data for interest rates, September’s job report clearly showed a continuation of the downward trend in job creation, which has been slowing since June, and that the easy days for post-pandemic job growth are behind us. For some perspective, we’re only halfway there: America’s jobs engine has now created a total of 11.4 million new jobs since the onset of the pandemic-driven lockdowns, only half of the 22 million jobs lost over the March-April period. Most troubling is the number of permanent job losses, which rose in September to 3.8M from 3.4M.

On top of that, when peeking into the jobs report’s detail on consumer wages, there remains a significant gap between the income levels now and where they were pre-crisis. It is important to remember that consumer activity accounts for around 70% of total economic activity, and since it’s tough to buy new shiny things when you don’t have a job or when you’re income is well below where it was at the start of the year, combined with rising COVID-19 intensity in many parts of the country, it’s likely that further sizable job and wage gains in the months ahead will be harder to come by. It’s a situation that begs for an additional round of well-targeted fiscal aid to promote continued momentum in consumer spending and a faster economic recovery in 2021.

Trump’s COVID-19 diagnosis sparks new life into fiscal-stimulus talks. Curious what the President’s health in the days ahead will ultimately do to interest rates? Look no further than the market’s reaction on Friday. Treasury yields initially fell (prices rallied) in Asia on Trump’s diagnosis, since it adds to the political uncertainty ahead of the election, spurring investors to seek safe havens. But the rise in yields stopped well sort of a big move after reports that Trump’s symptoms were mild and on speculation that the new dynamic might jumpstart virus-relief talks in Congress and the Senate. The slowing jobs situation only raised the stakes for Congress further to actually get something done, and fast. At the end of the day though, we doubt that Trump’s illness will be the catalyst that draws House Democrats and Senate Republicans closer together, rather it will be escalating fears of a declining economy. Further, we doubt a fiscal stimulus deal will get done before the election.

The last tally of where the negotiations stand showed US Treasury Secretary Steve Mnuchin offering a plan with a price tag totaling $1.6 trillion in additional spending while House Speaker Nancy Pelosi’s offer stood at $2.2 trillion. After the two officials failed to reach agreement on a plan, the House voted to approve the $2.2 trillion, but it is widely believed that the Senate is unlikely to follow suit. Why it matters: The alphabet soup of stalled fiscal stimulus talks, an ill but recovering President and the likelihood of a contested election all equate to more volatility in rates in the days and weeks ahead, which means more expensive rate caps and interest rate swaptions.

What to Watch This Week: It’s a light week for data releases in the days ahead, which are sure to be dominated by updates on the President’s health and the state of fiscal negotiations, which hold sway over America’s growth prospects through year end.

Outside of the President’s evolving heath status, the minutes from the Fed’s September policy meeting, set for release on Wednesday, will garner significant attention, as they’ll reveal just how such support Federal Reserve members gave to the Fed’s recent guidance that they’ll keep rates near zero until at least 2023, as well as just how likely that guidance could change over time. At the very least, we expect the minutes will once again stress the importance of further fiscal stimulus for consumer spending and the ability of small businesses to stay afloat.

Big Picture: While it’s clear that economic uncertainty will reign supreme through the election and beyond, many of our contemporaries are busy plotting where the economy and interest rates will be next year. While certainly entertaining to read, we doubt we’ll see much change from where rates are right now.

Why? Given that the Fed has beat everyone over the head with the notion that they’re firmly on hold for the foreseeable future, the short end of the yield curve will remain pinned at its current low levels, and rate volatility will remain suppressed on a relative basis, even if spurred slightly higher by a contested or problematic election result. The long end of the yield curve, like the 10-year Treasury yield, certainly could jump higher, but will likely end the year below 1.00%, even in a worsening economic and political scenario, given the Fed’s preference for long-term rates to also remain low.

What could break interest rates out of their rut before year end? A large stimulus package that goes through quickly (unlikely), a speedy economic recovery (also unlikely), readily available, inexpensive and fast infection testing and contact tracing (nope!), a widely distributed vaccine (doubt it) or a dramatic acceleration in virus infections (totally possible). 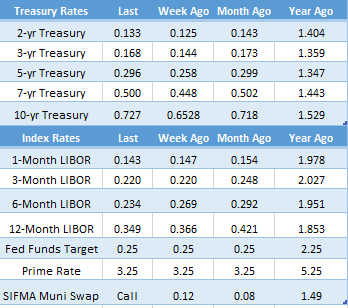 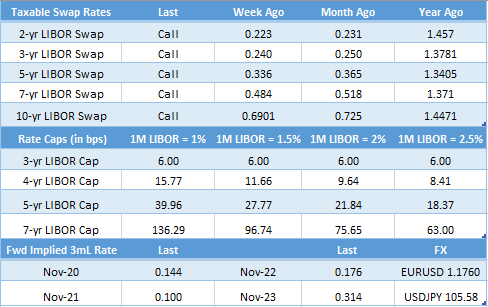 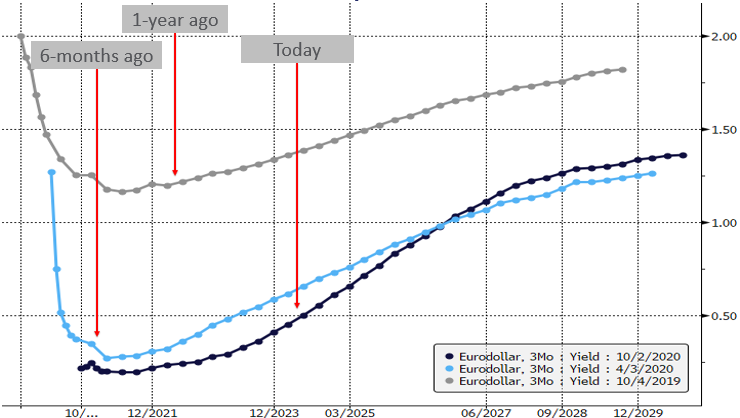 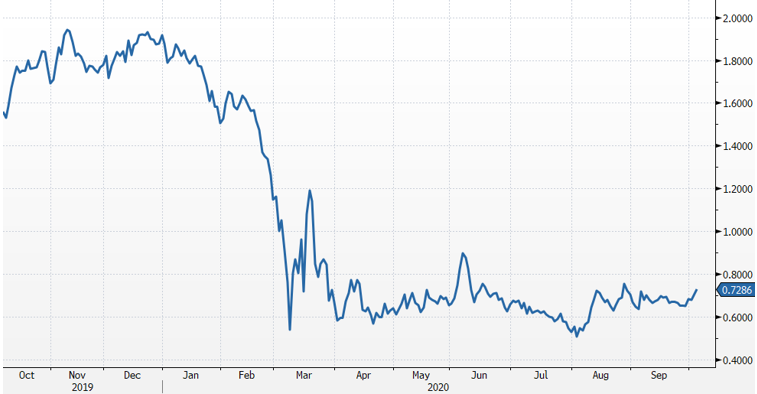