Last Week: Interest rates were mixed, and equity prices declined on the week amid ongoing global trade tensions. The yield on the 10-year US Treasury note held steady at 2.89%, trading in a tight range throughout the week as the escalating tit-for-tat US-China trade dispute threw a monkey wrench into any sustained advance above 3 percent. 1-month LIBOR continued its slow and steady march higher, wrapping the week at 2.0977%, up slightly from 2.0837% a week ago. Oil rose $2.70 to $67.50 despite an agreement among the Organization of the Petroleum Exporting Countries late last week to lift production caps. The US Dollar and Gold weakened. Treasury yield volatility, as measured by the Chicago Board Options Exchange 10-year Treasury Volatility Index (TYVIX), ended the week flat at 3.76.

The US-China trade spat got serious. President Trump ratcheted up the tit-for-tat trade spat with China by layering on whole new wave of threats. As it stands now, $200 billion in tariffs on Chinese imports are locked and loaded unless one side blinks. Should China choose to retaliate, another $250 billion in tariffs await, bringing the total to $450 billion. Here’s the problem: China only imported $130 billion of US goods in 2017. Thus to retaliate in equal measure, China would have to impose other non-tariff remedies, such as increased regulation of US multinational companies operating in China or allowing its currency to depreciate. The first tranche of tariffs on China are scheduled to come into effect on July 6th, leaving the two countries only two weeks to negotiate a deal. While we continue to believe the risk of an all-out trade war is low, the worst-case scenario is where China sells down its massive stockpile of U.S. Treasuries – causing rates to rise –  or devalues the yuan, both moves that would send shock waves through global markets. For now, rising uncertainty is beginning to skew investor’s positioning as they seek protection from negative impacts to the economy and corporate profits. Ignoring the trade spat thus far? Do so at your peril, as one of the initial market signals of an increase in its intensity will be higher rates.

Fed chairman said more rate hikes are on the way. US Federal Reserve chairman Jerome Powell told an annual gathering of central bankers in Portugal, that the case for a continued gradual rise in interest rates is strong, pointing to a low unemployment rate and inflation that is approaching the Fed’s target. Powell also said that while asset prices are high by historical standards, he does not see broad signs of excessive borrowing. Banks, he observed, have greater levels of capital and liquidity today than they did prior to the financial crisis. Chair Powell’s comments solidified our expectations for two more, 0.25% Fed rate hikes this year: the next in September and the last in December-ish. The fly in our Chardonnay? An escalation in the US-China trade spat into all-out trade war, which would derail US economic growth and totally change the Fed’s calculus for for future rate hikes. Keep reading for a deeper analysis.

What to Watch this Week: There is little on the economic calendar to distract markets from the US vs The World trade dispute, and the noise its creating won’t go away any time soon. As such, markets and the Fed are watching economic data intently for any signs the escalation in tensions spur faltering confidence in the US economic outlook and any resultant postponement of hiring, investment or spending decisions by corporates and consumers. While higher import prices and reduced demand for exports will be the first effect we’ll feel, a slowdown in hiring, investment or spending are of much greater consequence to the long-term health of America’s economy and the future direction of interest rates.

For the week ahead, Tuesday’s June consumer confidence data, Wednesday’s durable goods orders, and Friday’s PCE-Delfator, will take center stage in this regard. Given that consumer attitudes speak to the underlying resilience of the economy, any data overshoot in this week’s confidence is a good thing, while durable goods orders are expected to continue their slow decline. The PCE-Deflator – one of the Fed’s favorite inflation gauges – is poised to edge up to 1.9% year-over-year, still short of the Fed’s 2% objective.

Take-Away: Trump’s game of chicken is rattling the market’s outlook for interest rates, no doubt. Our focus now is examining how the escalating trade tensions could influence the Fed’s path for rate hikes over the rest of the year. With the noise escalating seemingly by the day, everyone’s on high alert for any sign of negative fallout from the escalating trade tensions. When it shows up, it will do so informally via general talk among business leaders and then more formally in economic data, specifically the business and consumer confidence gauges.

It seems the former is already happening, as acknowledged by Fed Chair Powell last week in stating that the Fed’s business contacts were starting to discuss postponement of hiring and investment decisions – a growth killer at worst and a catalyst for the Fed to stall its plans for two more rate hikes this year at the least. While consensus is building for a 0.25% September hike, the Fed will pass on hiking again in December if trade tariffs escalate further and incoming economic data worsen. For now, we believe Trump’s current hard-line stance on trade is a bluff, and he’ll back off once our trade partners begin to show acquiescence, and the Fed’s planned two, 0.25% rate hikes over the remainder of the year will come to fruition. 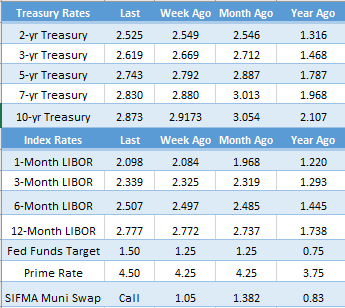 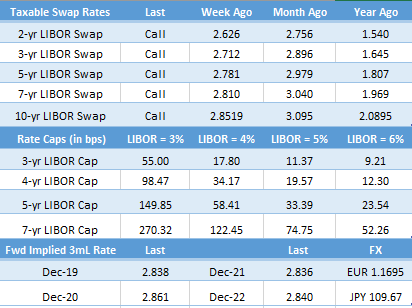 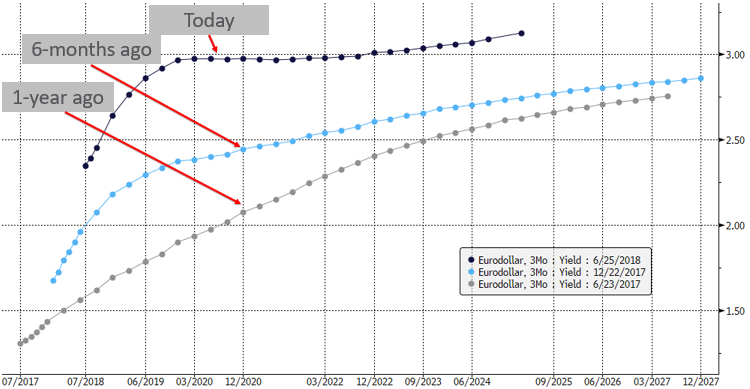 Click here for more DL Reports
The Once, Recent, and Future Fed