What You Missed: Long and short-term interest rates fell on the week, whipsawed by the conflicting forces of pending rate hikes and risk of conflict on the Ukrainian border. The yield on the US 10-year note wrapped the week near 1.93% after peaking near 2.04% mid-week. Short-term rates, like the 2-year Treasury and SOFR posted similar moves. The price of a barrel of West Texas Intermediate crude oil declined to $91.07 from $93.98 while the US Dollar weakened, and Gold strengthened. Treasury yield volatility, a key driver of the cost of rate caps and swaptions, backed off earlier highs but remained elevated near levels not seen since March 2020.

Russia – Ukraine tensions escalate – what it means for interest rates. While the latest geopolitical tit-for-tat of the Russia-Ukraine standoff are best covered in depth elsewhere, Putin’s latest move to recognize the self-proclaimed separatist republics that his country backs in eastern Ukraine have notably worsened the situation, ratcheting up tensions with the West. The interest rate markets are reacting as expected as global investors move assets toward safe-havens – e.g., US Treasury bonds – raising their price and lowering their yields, pulling them off their recent highs. Treasury yields are caught in a veritable tug-of-war between looming Fed hikes, aimed at pushing yields higher and investor’s desire for safety amid threats of war, pulling yields lower.

Our take: It’s easier to handicap the Fed than it is to guess what Putin will do next. The Ukraine standoff, combined with concerns that the Fed’s looming rate hikes could dampen the outlook for economic growth, increases the risk of additional swoons in interest rates and other financial markets in what’s turning out to be a tumultuous start to the year. Amid the uncertainty, one thing is certain; volatility of interest rates will continue in the near term, putting upward pressure on the cost of rate caps and other option-based interest rate hedges. Do you have an interest rate risk advisor at your beckon call that can lead you through the chaos toward a brighter day? Now would be the time to get one.

Rates traders dialed back bets of a 50bps hike in March. It seems that markets are finally coming around to our belief that the Fed won’t go big – by hiking rates by 50bps – at its March 16th policy meeting. In last week’s newsletter, we argued that the Fed, once it starts it series of successive rate hikes next month, will be very sensitive to how its tightening actions impact economic growth, preferring to nudge rates slowly higher, allowing markets and the economy to slowly adjust and avoid a squashing of positive economic momentum. Swaps traders seem to agree with us, now indicating that a smaller hike is more likely.

While higher-than-expected U.S. inflation and the Fed’s apparent proclivity to tighten had fueled speculation earlier this month that a 0.50% hike was more likely than not, the recent bout of geopolitically fueled market risk aversion smothered those expectations last week and cemented them over the weekend. As such, a quarter-point increase in March appears to be the most likely scenario. The lack of any hint of a larger hike in the minutes of the most recent Fed meeting, released last week, also bolsters the argument for a more standard-sized, 0.25% hike. Looking further out, markets are now projecting the Fed Funds rate – the rate the Fed raises or lowers as it hikes and cuts – will peak near 1.6% in the middle of 2023. For perspective, if rates traders are correct, that means the Fed will hike 0.25% about six times between now and then.

What to Watch This Week: The Fed vs. Russia-Ukraine tug of war on rates is set to intensify in the coming days.  Even though it’s now looking like, via last week’s Fed meeting minutes, the Fed hasn’t yet abandoned its belief that eye-watering inflation will soon fall on its own, more bad news on inflation is coming and will test the Fed’s resolve.

And what could be that bad news? Look no further than the price of oil. Escalating Russia-Ukraine tensions have pushed oil prices close to $100 per barrel. If Russia makes more moves toward “invasion”, energy prices could spike even higher as the Fed’s March monetary policy meeting approaches. But would $100 oil spur the Fed to tighten more aggressively? We doubt it, as the spike in oil prices would likely be viewed as temporary, with little pass-through to overall inflation. In addition, rising energy prices typically act more like a tax on consumers, reducing their discretionary income and weakening overall retail sales. Regardless, the Fed understands that any escalation of the Russia-Ukraine conflict will result in an undesirable mix of even higher energy prices, tighter financial conditions, and a negative shock in the confidence of consumers and businesses; all relevant to the Fed’s thinking on when and how much to pull back on its easy-money policies.

In the meantime, the trillion-dollar question now is how US economic growth holds up in the midst of it all. For now, it appears to have enough positive momentum to weather the blows, and this week’s economic data will likely serve to support that view.

The always-important consumer is the center of it all, and specifically the degree to which they feel prosperous enough to keep the spending train motoring along. A big contributor to the consumer’s positive vibes is the housing market, which is still strong (Case-Shiller Home Price Index, Tues.; new home sales, Thurs.; pending home sales, Fri.); wage income is growing above trend (PCE, Fri.). On the business front, investment is surging as firms rebuild inventories (GDP, Thurs.; durable goods orders, Fri.); and the labor market is red-hot (initial jobless claims; Thurs.). The fly in the merlot? Weak consumer optimism, due to ongoing worries about inflation (consumer confidence, Tues.; University of Michigan consumer sentiment, Fri.).

Uncertain about hedging future funding or wanting to stay flexible by floating but looking for solutions other than an interest rate swap?  Call us about swaptions or corridors. 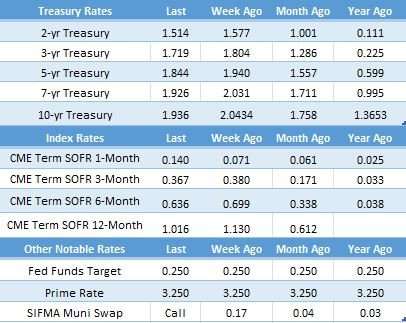 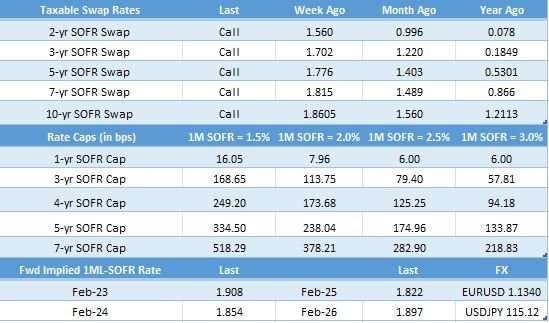 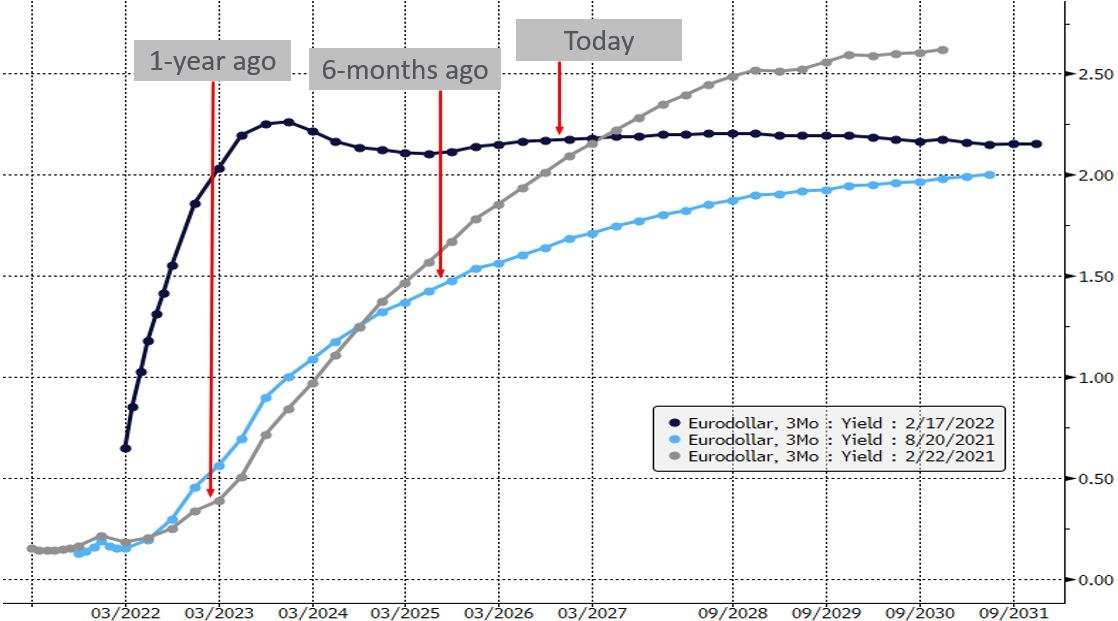 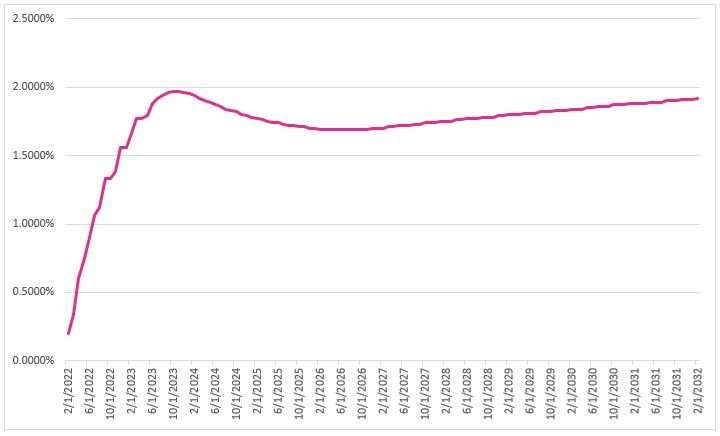 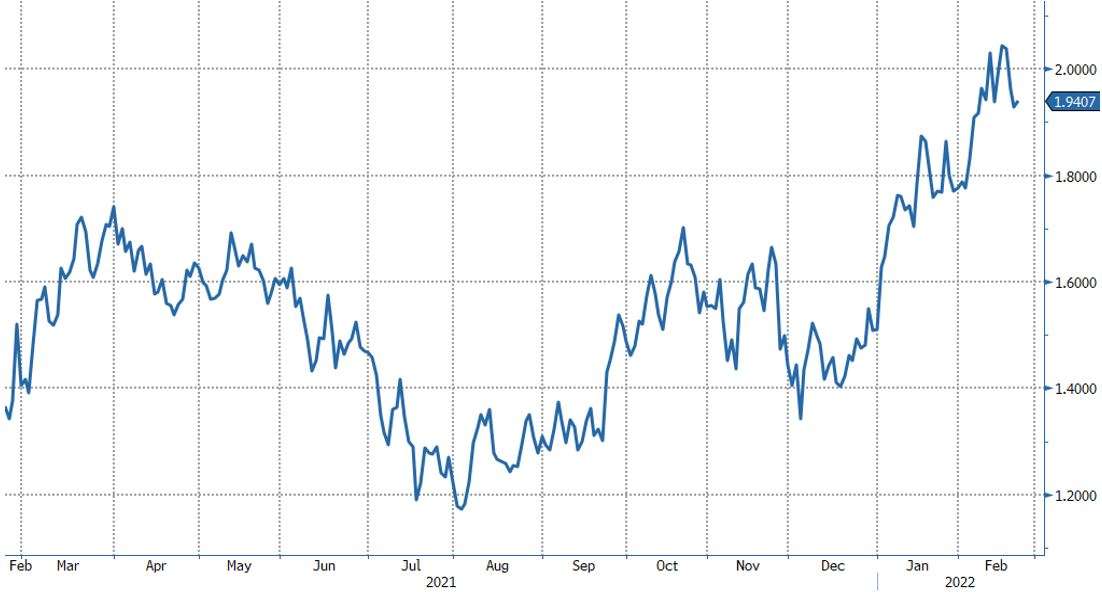