What Will Happen to Rates When a Vaccine Shows Up?

Last Week: Interest rates were mixed, and equities rose slightly as markets struggled to interpret dovish language from the Fed. The US 10-year Treasury note yield dropped to 0.63%, a level it’s hovered around for weeks now and about thirty basis points above the record low in March. 1-month LIBOR rose to 0.17%, up slightly from the week’s 0.16% low. The price of a barrel of West Texas Intermediate crude oil fell $0.22 to $41.94, as the US Dollar strengthened, and Gold weakened. Treasury yield volatility, a key driver of the cost of rate caps and swaptions, fell over the course of the week.

Fed meeting minutes sparked fears of an even longer economic crisis than expected. Released to the public last Wednesday, the minutes from the Fed’s last policy meeting in July confirmed the uncertainty prevailing over America’s economic outlook. To quote, “Members agreed that the ongoing public health crisis would weigh heavily on economic activity, employment, and inflation in the near term and was posing considerable risks to the economic outlook over the medium term.” Our take: The statements implied that the Fed is likely to stick with its aggressive stimulus measures for longer than indicated in its previous guidance, adding a layer of upward pressure to long-term interest rates in the process, as investors demand a higher return for buying Treasuries in an environment of ultra-low rates that will last for many quarters to come.

Yield curve control is out the window – for now. The Fed minutes also indicated that yield caps or targets were not on the Fed’s radar as a tool to be used in the near term as many (like us) had suspected. However, the minutes confirmed that while the Fed is gearing up to release the results of its recent policy framework review, it plans to enhance traditional tools – aka forward guidance – soon. However, rather than doing so at its next meeting on September 16th, it seems that we will have to wait until year-end or the beginning of 2021 to see it. That’s too bad; markets are hungry for the details and must now look to fiscal policy – efforts by Congress and the President – more than ever for any additional boost to the post-pandemic economic recovery. We’ll see if they can get the job done amid the growing sizzle surrounding the looming Presidential election.

US housing metrics improved. Homebuilder confidence in the newly built, single-family home market jumped to a 35-year record high in August, according to the National Association of Home Builders/Wells Fargo Housing Market Index. Housing starts were 1.5 million in July, a 23% increase from June and ahead of the 1.2 million expected. In addition, US home sales surged a record 25% in July as prices set a new high. However, there are storm clouds on the horizon: the soaring cost of lumber and a rise in the number of mortgage delinquencies and evictions will likely take some of the shine off the industry in the weeks ahead.

The US dollar fell to a 27-month low. The US dollar index fell to its lowest level in more than two years because of the ongoing effects of the Fed’s massive stimulus programs and a string of bleak economic data. The US dollar usually functions as a safe-haven investment in moments of crisis, but the Fed’s programs helped propel risk assets to all-time highs while reducing demand for safe-haven assets, like US Treasury bonds. What it really means: When we see a sell off in the dollar like this, we get panicked calls from clients asking us if the US dollar’s decades-long dominance of currency markets is finally waning. The short answer is NO, not anytime soon. Why? The US dollar is one of the two currencies involved in the vast majority of business transactions globally, followed at a distance by the Euro, British pound and Japanese yen, and that trend isn’t likely to change anytime soon. How do we know? Well, here’s a simple explanation for you: If the world was really coming to an end financially speaking, which currency do you, and most others in the world, want to own? The Euro, with all of the European Union’s financial and governance problems? Probably not. How about the highly manipulated Chinese renminbi? Uh, no. The British pound? BREXIT anyone? The US, for all its foibles, trials and tribulations, remains the cleanest “dirty shirt” in the world, and that won’t change anytime soon. Need we say more?

Jobless claims signaled a sluggish employment recovery. Our favorite piece of high-frequency data – weekly jobless claims – increased by 135K to 1,106K in the week ended August 15th after falling sharply in the prior two consecutive weeks. With new virus cases trending lower, employment should continue to rebound – although childcare troubles and school closures present an interesting dynamic to those on the job hunt. Without a job, and with the Federal top-up to unemployment benefits now mostly evaporated, the road to economic recovery will be long and bumpy.

Congress’s coronavirus relief talks hit impasse. The stalemate between Democratic and Republican US congressional lawmakers continued, although the possibility of a smaller coronavirus relief deal remains. During the week, Arizona, Colorado, Iowa, Louisiana, Missouri, New Mexico and Utah were the first states to be approved for an extra $300 a week in federal unemployment benefits, although the assistance may last only three weeks. Arizona has started making payments, and a few other states, including Michigan and New Hampshire, have submitted applications. All told, it means that implementation troubles for President Trump’s executive actions on unemployment benefits likely doom them to be stop-gap at best, and very likely subpar relative to what the Fed had hoped Congress and the President would produce, implying that the Fed may not be done with its stimulus efforts just yet. For interest rates, the stalled fiscal stimulus will remain a drag on yields until it is resolved.

What to Watch This Week: It will be an event driven market in the days ahead. The Republican National Convention, in Charlotte, North Carolina, and the Federal Reserve’s annual Economic Policy Symposium will be the main drivers of rates.

Fed Chair Powell’s speech at the symposium on Thursday will be closely watched, as he’s expected to address the Fed’s recent year-long review of its monetary policy framework, which is widely expected to lay the groundwork for a new strategy to address inflation, or lack thereof. Changes to the Fed’s current dual mandate – ensuring maximum employment and price stability – certainly won’t be made willy-nilly, thus markets will be laser focused on every syllable of Powell’s speech for signals where the Fed is leaning. However, no one expects a formal announcement of changes from the Fed until January at the earliest.

On the data front, an estimated deceleration in new and pending home sales growth and a decline in personal incomes in July are on tap, as well as a likely minor upward revision to Q2 GDP. Jobless claims will hopefully resume their downtrend following their unexpected rise last week.

Big Picture: Attempting to game-out interest rate scenarios post-Covid will likely turn out to be a humbling experience. A once in a hundred-year pandemic, historic monetary and fiscal stimulus, an equity market crash followed by a historic rally to new records and ultra-low interest rates all the while tell us not to assume a particular outcome once the discovery of a vaccine happens. Regardless, it’s a useful exercise to at least consider a few scenarios that could come to pass once markets turn on a dime in response to a “cure” and a return to normal life:

In our opinion, the most beneficial scenario to markets and the economy for now is not a vaccine, but one where cheap, quick, and reliable testing is made available to provide contact tracing, which would allow more states to open back up. But that’s a topic for another day.

How is your business prepared for any of the three scenarios above? Let us help you get there. 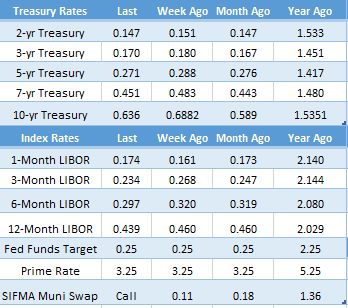 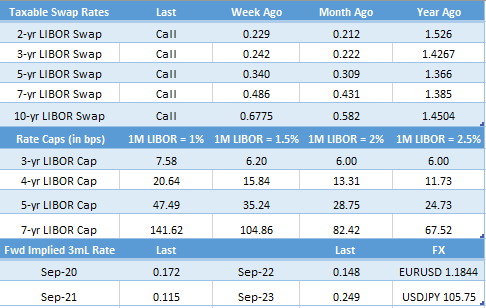 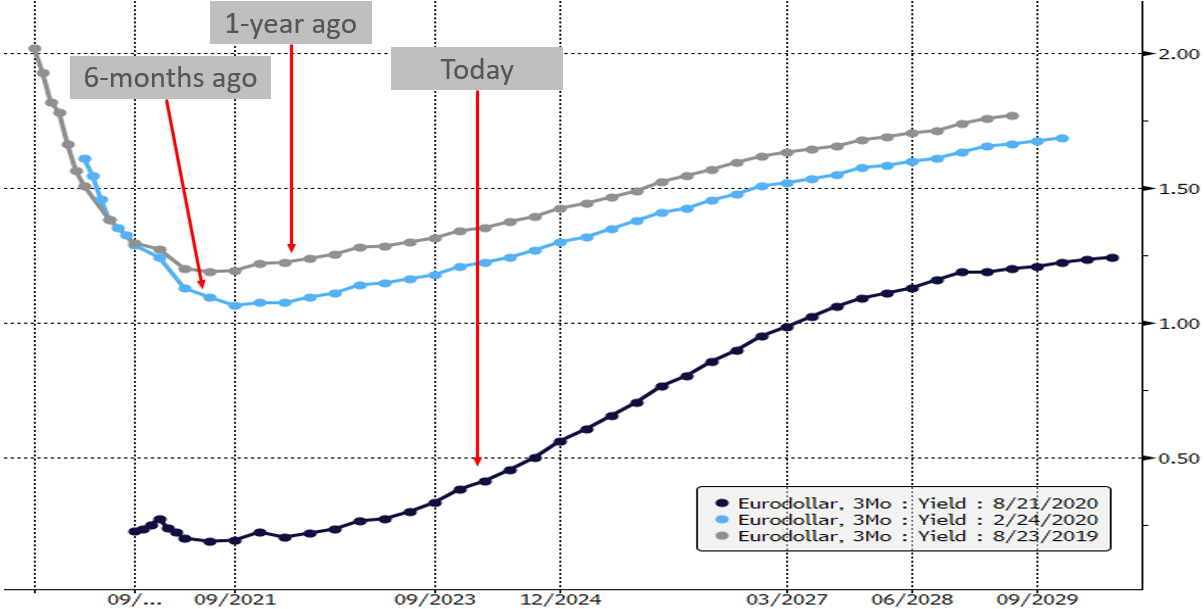 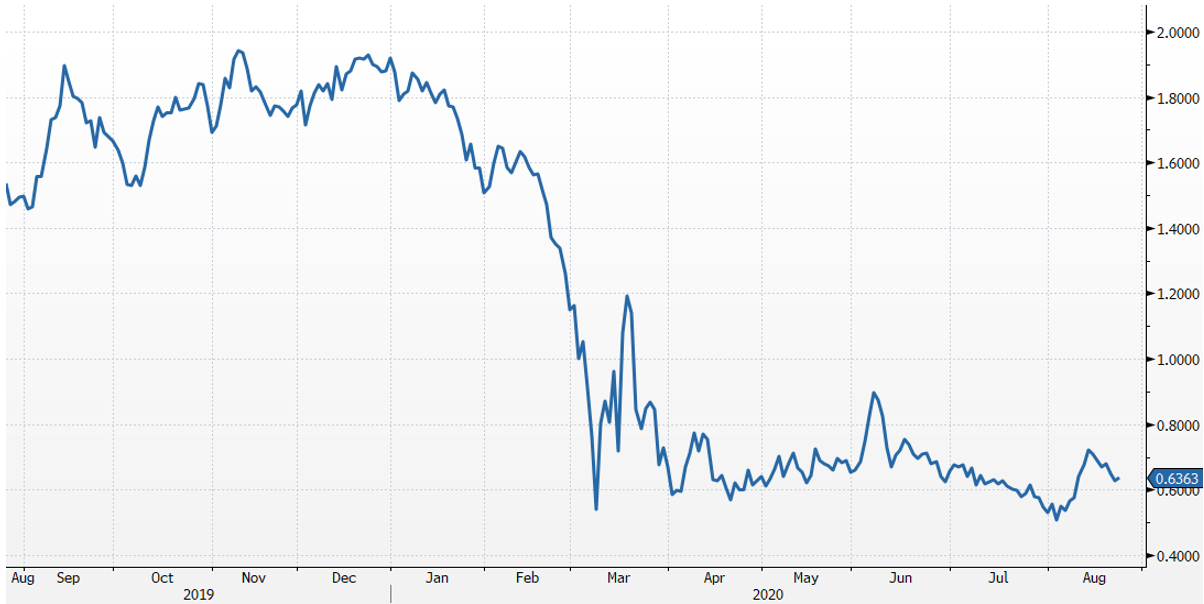