Last Week: Interest rates plummeted, and equities were lower on the week, as worries over the global economic impact of the coronavirus outbreak rattled markets. The yield on the US 10-year Treasury note fell 19 basis points to 1.51% – just 15 basis points above its all-time low of 1.36%. 1-month LIBOR ticked up a modest two basis points to wrap the week at 1.66%.  Building uncertainties about the future of global growth also weighed on commodity prices, as the price of crude oil declined three dollars to $51.50 while the US Dollar weakened, and Gold strengthened. Treasury yield volatility spiked to 5.35 from 4.63 this time last week.

Coronavirus dooms rates to stay low for even longer. While details of the outbreak are covered elsewhere, just know that after a nearly 40 basis point fall in the US 10-year yield since the start of the year, the looming hit to Chinese – and global – growth dooms rates to remain ultra-low for a while yet.

Given that the virus outbreak is having an impact on multiple sectors of the global economy, with tourism and travel impacts being the most visible, we thought it useful to outline a short list of how the outbreak will spill over into the US growth outlook in the immediate future:

Fed stayed on the sidelines. The Fed left its federal funds rate target unchanged on Wednesday while saying it will continue repurchase (“repo”) operations through April. Fed Chair Powell’s comments following the decision were perceived as slightly dovish by the market, though he said it was too early to assess the economic impact of the coronavirus outbreak. For some historical context, by the time the June 24-25, 2003 Fed meeting rolled around, the SARS outbreak had dissipated and mention of it in the Fed’s meeting statement was largely residual. Still, the Committee had yet to see a sustained pickup in economic activity, subsequently voting for a 0.25% “insurance” rate cut as a result. Could the same happen this time around? Markets certainly think so. As of this morning, they’ve priced a full rate cut by July, and another by the end of the year. While it’s true that markets have a history of overreacting to exogenous force majeure-type events (think hurricanes), it’s also the case that the virus outbreak is going to have a deeper economic impact and the storm, as it were, has yet to blow over. Is the market right to price such a certainty of cuts? Perhaps, but cutting rates can’t cure sick people. Given the performance of growth in the U.S. (and Europe, and Australia, etc.), amid successive rate cuts, it’s not even clear that they can cure sick economies, either.

Brexit, at last. The UK formally left the European Union (EU) on Friday. Markets – and we – responded with a shrug. Why? Because now the real work begins, with the beginning of a formal “transition phase” until the end of 2020 during which Britain will be able to trade freely with the EU and will be subject to its laws, even though it has no say in making them. During this time the UK will remain in the single market and customs union but no longer be represented in EU decision-making bodies. Much now hinges on ongoing trade negotiations and the essential tradeoff between regulatory alignment and market access – the crucial Brexit issue going forward. While headline grabbing, don’t expect much impact on interest rates until later in the year, when the shape of what Brexit really means for the UK, Europe and the US becomes clearer.

Trump signed the USMCA trade pact. The President signed into law the US-Mexico-Canada agreement, an update to the North American Free Trade Agreement (NAFTA) that reduced trade barriers between the three nations starting in the early 1990s. The pact is expected to increase US economic growth by about 0.35% annually over the long term as trade uncertainties are reduced. While the agreement is only a modest improvement over the previous NAFTA agreement, its signing last week gave markets a glimmer of hope that some legislating can get done amid a cloud of government dysfunction.

US economic growth was “steady as she goes” in Q4. The US economy grew at an annualized rate of 2.1% in the last quarter of 2019, equaling Q3’s pace. While Q4 data will be revised twice before becoming final, for the full year the US economy grew at a 2.3% rate. We caution you on taking the headline GDP results at face value. Q4 GDP was temporarily boosted by a drop in imports, which is unlikely to be repeated. More on that below.

What to Watch This Week: Friday’s jobs report for January will dominate the week. We expect the number of new jobs to come in at 160k, compared to six- and 12-month trailing averages of 189k and 176k, respectively. The unemployment rate will come in at a steady 3.5%, and wages likely rebounded to up 0.3% MoM from last month’s paltry 0.1%.

Other data releases on the calendar are mostly second tier; gauges for motor vehicle sales, and manufacturing ISM will all come in lower, keeping optimists on edge.

Take-Away:  If the coronavirus spreads more than anticipated, we see the factors outlined above impairing US growth and putting further downward pressure on interest rates. However, even if the outbreak is resolved in short order, the US economic outlook is still increasingly in doubt.

Recent indicators have given optimists much to be hopeful for (the trade war de-escalated, US GDP topped expectations last quarter, new jobs in the second half of 2019 surpassed the first half and durable goods orders showed the strongest monthly increase since August 2018). However, those recent events are hiding a darker side: business investment remains in the doldrums and will continue to sink in the near term due to a confluence of weak commodity prices, Boeing production issues and diminished consumer demand for durable goods.

Recent growth figures have moderated, specifically those affecting the almighty US consumer, the engine driving growth at this stage. The coronavirus incrementally adds to the growing economic uncertainty. Media attention and the faster spread of news compared to the SARS outbreak in 2003 could weigh on attitudes to a greater extent than anyone expects, even if lower resulting gasoline prices provide a tailwind to consumers. Bottom line: recession risk remains low, growth prospects have not improved materially, and there’s more reasons for rates to move even lower than for them to rise materially. 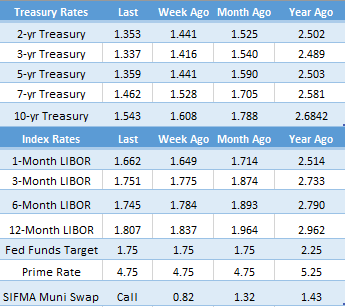 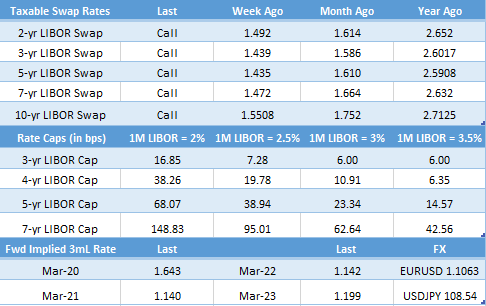 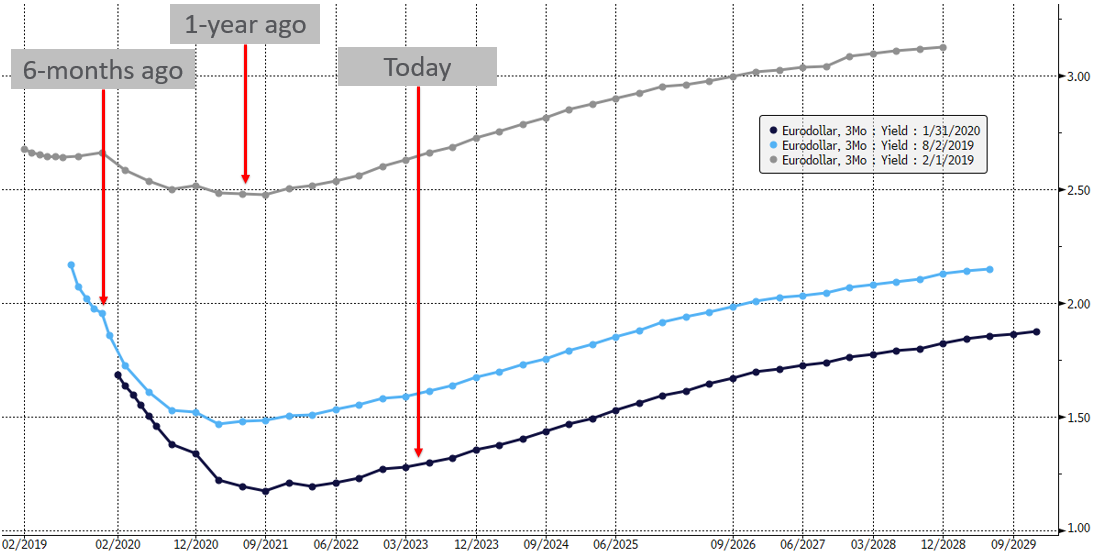 Good Data No Cure for Virus Fears
Scroll to top