Last Week: Interest rates were mixed and equities traded close to record territory as optimism over the potential for an effective COVID-19 vaccine raised hopes that economies will be able to open up more fully, and sooner than anticipated. The yield on the US 10-year Treasury note rose 10 basis points to 0.89%, having reached 0.97% on Monday at the height of the vaccine euphoria. 1-month LIBOR followed suit, rising through most of the week to 0.15%, before settling to 0.14% at week’s end. The price of a barrel of West Texas Intermediate crude oil rose to $40.50 from $37.60 a week ago, as the US Dollar and Gold both strengthened. Treasury yield volatility, a key driver of the cost of rate caps and swaptions, fell throughout most of the week.

The virus spike and vaccine optimism combo have begun to steepen yield curves. Will it last? Markets have been anticipating a moderately efficacious coronavirus vaccine to show up sometime toward the middle of 2021. However, news last Monday – and again this morning – that a strong candidates could become available in reasonable quantities – and in the first half of 2021 – brought a change of heart, propelling long-term interest rates, like the 10-year Treasury yield, markedly higher (short-term rates also moved higher, but barely), steepening the yield curve in the process. The move came amid a dramatic uptick in COVID-19 cases in the US, with daily positive test results hitting 150,000 last Thursday. Hospitalization and death rates are trending higher as well, typically lagging infections by 2-3 weeks. Some European countries are starting to see an easing in the rate of new infections after mobility restrictions were renewed in recent weeks. Need a primer on yield curves? Click here.

Our take: The theory goes that the resurgence of Covid-19 adds to public pressure on governments to provide more assistance to support consumers, in the form of fiscal stimulus. If governments follow through with more help, they limit the economic fallout from the virus in the near-term, and consumers have more money to keep the consumption engine humming and even boost their savings. By the time the vaccine becomes widely available – perhaps as soon as H1 2021 – consumers’ high savings rate will be an additional source to tap for economic recovery, adding inflationary pressure.

Long term rates have already risen notably in response, as seen in the 10-year Treasury yields breach of 0.90% for the first time since March. The question now is if the increases in yield can last. Now that the Presidential election is over, we expect long-term yields to be whipsawed between the opposing forces of virus infections and vaccine news, likely falling on the former and rising on the latter as we enter 2021. No matter how high yields rise during that time, the Fed will be watching, standing ready to cap yields’ rise to shepherd us to a slow but steady recovery through the latter half of next year. All told, the vaccine news is already priced in to yields, and we doubt we will see the 10-year Treasury yield above 1.0% before year end, or above 1.50% the second half of next year, even if viable and readily distributed vaccines show up. Regardless, a breach of 1.00% on the 10-year would be significant and a bullish indicator of future economic growth.

Washington’s business remains unfinished. Little movement was seen on Capitol Hill last week toward resolving a standoff over the size and scope of additional pandemic relief. The Trump administration said it’s stepping back from the negotiations, leaving it to Congress. Speaker of the House Pelosi reiterated that any package needs to reach at least $2.2 trillion in new spending while Senate McConnell continues to advocate for a less robust package worth around $500 billion. Unless the two sides come to an agreement before the end of the year, a number of pandemic-related programs will lapse on December 31st, including funding for some of the Federal Reserve’s programs to backstop business and municipalities, as well as extended jobless benefits. With virus infections exploding, record hospitalizations, and a efficacious, widely distributed vaccine months away, there is little between now and the Georgia state runoff races – which will determine which party holds the majority in the Senate and perhaps tip the scales of negotiations – to steer us away from a worsening economic picture through year’s end. Any sustained move higher in rates will be hard to come by as a result.

US economic data painted a mixed picture. It was a week of mostly second-tier economic data releases, with jobless claims, consumer prices, and consumer sentiment gauges all showing a stable state of the economy at the moment, but implying a teetering of sorts as virus cases rise and cities contemplate new lockdown restrictions while fiscal aid remains in limbo.

Bets for the next Fed hike moved closer. Futures markets shifted tone last week, moving the timing of the first Fed hike closer by nine months, to November 2023, and added a full quarter-point hike to forward rates. Any views of a more aggressive Fed have been hard to come by given it’s new monetary policy regime of flexible average inflation targeting, under which it has pledged to allow the economy to run hot, allowing inflation to exceed its 2% target if necessary to achieve an average 2% rate.

What to Watch This Week: The focus in the coming week returns to economic and virus data as the nation awaits more official election results. While the political theatre is certainly absorbing to say the least, just know that the virus will run the economic show through year end.

On the data front, a strong September gain in retail sales is unlikely to carry over into the October release (Tuesday), as seasonal factors start working against the gauge ahead of the holiday season. The manufacturing sector should continue to benefit from the need to replenish low business inventories; industrial production is expected to have gained in October (Tuesday). Wrapping up the data to watch, housing affordability appears to have peaked earlier this year as prices spiked, offsetting the benefit of low mortgage costs. Coupled with inventory scarcity, this will likely temper gains in home sales (Thursday).

On the Federal Reserve front, the Senate has moved to set up a vote as soon as this week to confirm Judy Shelton for the position of Fed governor. She is expected to pass after Senator Lisa Murkowski (R-Alaska), a key swing vote, announced she would support the nomination.

More changes to the leadership at the Fed will be in store for 2021 because of Biden’s win. As the President-Elect forms his cabinet, some prominent Fed policy makers could shift into new roles: this may include Fed Governor Lael Brainard, who is widely expected to be among contenders for the Treasury Secretary role, as well as the Atlanta Fed’s Raphael Bostic, who could be considered as a potential replacement for Jerome Powell as the Fed chair.

Big Picture: With the long-awaited results of the US elections and a positive first late-stage vaccine trial now out of the way, our long-term focus is shifting to how President-elect Biden will likely have to govern with a Republican Senate, and how the dynamic could limit further fiscal relief. Should the split government come to pass, we suspect that a stimulus deal in the vicinity of $750 billion to $1 trillion would struggle to pass, creating a downside risk to rosy economic projections for the first half of 2021. However, reduced odds of any near-term tax hikes and encouraging news about the Covid-19 vaccine, suggesting immunization may start next month, represent risks to the upside.

In the meantime, the pace of America’s economic recovery is likely to stall before it gets better as accelerating Covid-19 cases hurt economic activity long before a vaccine changes the game in mid-2021. Fiscal support has largely dried up for now, leaving consumer disposable income – which drives 70% of America’s economic activity – lower in the final months of the year. Overshadowing everything is the threat that a new wave of the coronavirus will worsen with colder temperatures. Renewed lockdowns in Europe are a reminder that the US also faces significant downside risks this winter. Any moves higher in long-term rates will be tenuous and likely temporary as a result.  All eyes should be on Georgia’s senate race.  This will be the decider on any stimulus package and direction of long-term rates.  For now, we are in a “wait and see” mode. 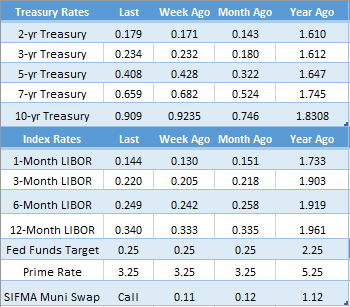 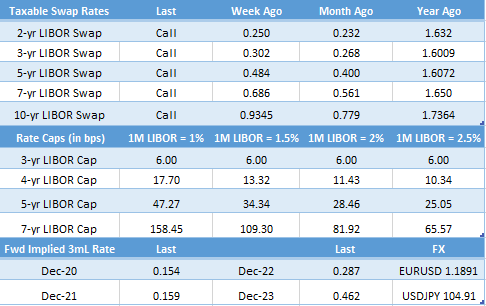 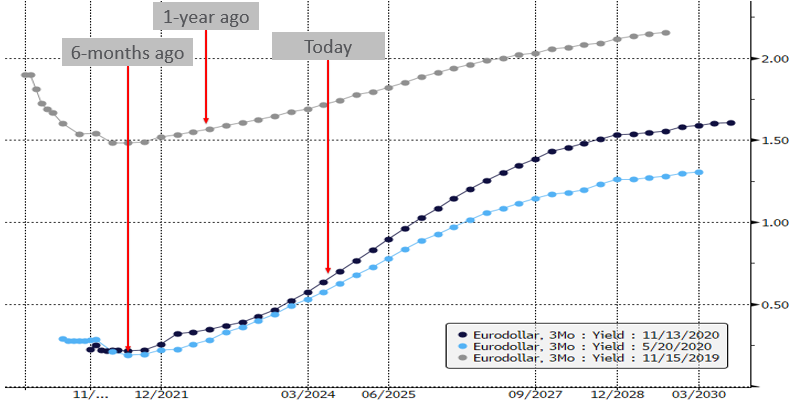 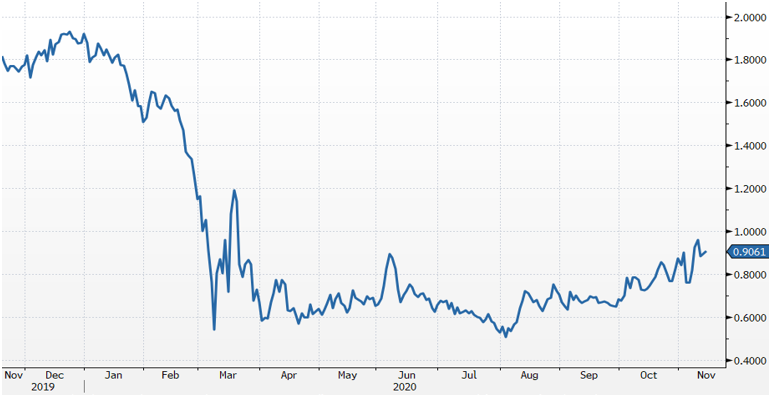