Last Week: Interest rates, Oil, and global Equities advanced, while Gold and the US dollar declined. The most-followed US equity indices; the Dow Jones Industrial Average, S&P 500 Index and Nasdaq Composite Index, all set records during the week. US 10-year-note yield rose to 2.50% from 2.42% a week ago, while 1-month LIBOR closed the week at .7783%, up from .7710 the week prior. Volatility, as measured by the Chicago Board Options Exchange Volatility Index (VIX), fell to 10.8 from 12.4 the week prior.

As we suspected, US economic growth slackened to an annualized pace of 1.9% in Q4 from the 3.5% reading in Q3, despite a third straight month of improved capital expenditures by US corporations. Capex has been particularly sluggish in recent years, and an upturn in capital investment could contribute to better corporate profits down the road.

The Trump administration took a series of catalyzing executive actions in its first week, including holding meetings with the CEOs of several manufacturing companies and encouraging them to build new plants in the United States. Foreign trade, much discussed by candidate Trump, remains a major focus, with the new president threatening a 20% tax on Mexican imports. Despite the drama, Trump’s executive orders required little political capital and required almost no negotiation with members of either party, hence the real test of the admiration’s skill at engagement lies in the weeks ahead.

This Week: It’s Fed week, and the meeting will be a non-event. As Yellen & Co. meet on Wednesday for their first policy meeting of the year, they’re confronted with two dominant tasks: guessing when wages will rise meaningfully now that most of the slack has been removed from the labor market, and gaining greater clarity on how the Trump administration’s policies will change the economic landscape.  Unfortunately, it’s unlikely the Fed will gain any substantive clues on either issue any time soon, which means we’ll all be kept guessing as the Fed fails to offer anything new in this week’s meeting. No post-meeting press conference is scheduled and the Fed’s current economic forecasts won’t be updated until March 15th, thus markets will look toward the tone of the meeting statement for insights into the Fed’s thinking.

Outside of the Fed meeting, several pieces of Tier-1 economic data are on tap. January US payrolls is set for release on Friday, where we expect a 175K on-trend rise in US job creation. While witnessing a continual humming of America’s job creation engine is comforting, we and most others will be focused on the wages portion of the data for signs of increasing wage pressures. Markets are expecting a 0.3% rise. Other data gauging activity in manufacturing and services are expected to continue their expansionary tone.

Take Away: While a variety of sentiment indicators improved after the election, there has been very little follow-through into hard economic data like industrial production or durable goods sales. Markets and business leaders seem to hold an optimistic view on possible tax reform and regulatory changes, but no one has taken any preemptive action to invest thus far.

Over the next several weeks, we’ll witness the release of the first several pieces of hard economic data for 2017. Signs of wage growth will become ever more crucial in gauging just how much economic growth we’ll see this year, and how the Fed will act in response, as it forecasts a moderate pickup in growth over last year. Without consistent increases in wages over the first half of 2017, expect downward pressure to build for equity markets and for rates to decline as the need for successive rate hikes by the Fed evaporates. 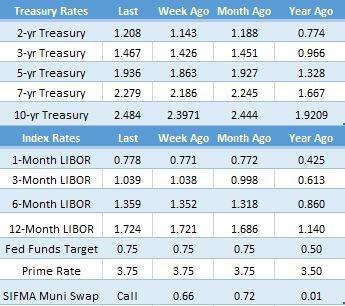 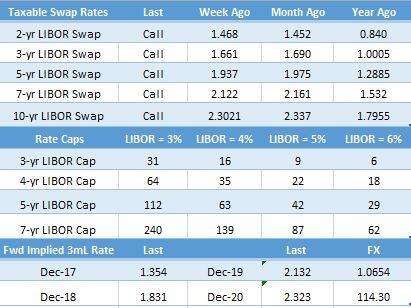 LIBOR Futures (the market’s view on where LIBOR will trade in the Future): 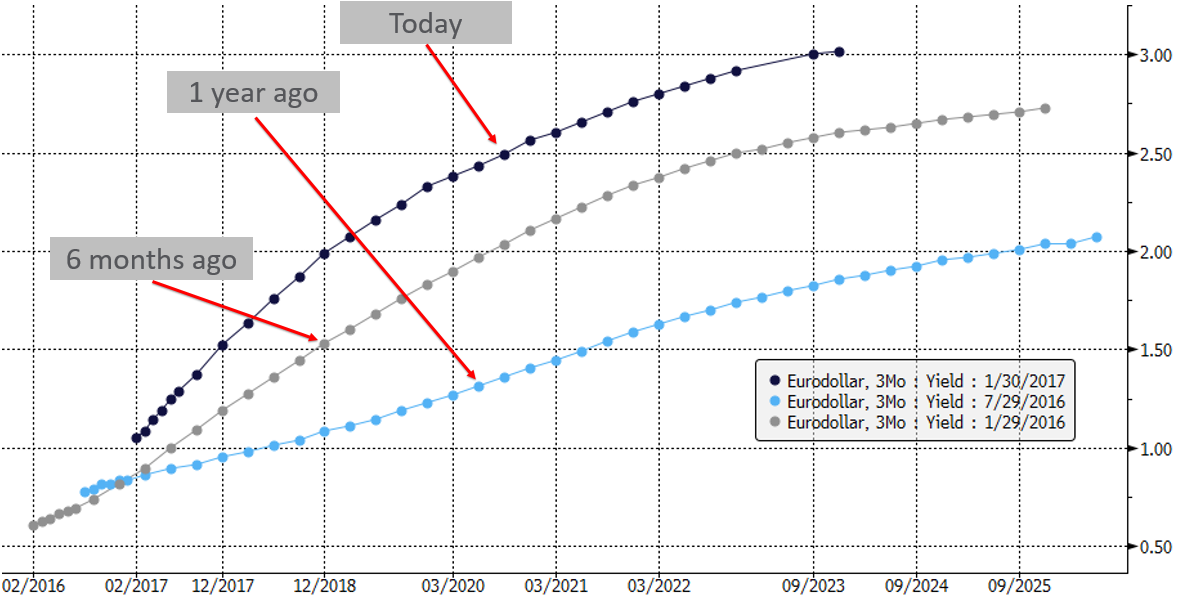