Last Week: Interest Rates declined while global equities gained on the week amid continued improvement in manufacturing and solid US employment figures. US 10-year Treasury yield fell to 2.43% from 2.50% a week ago, as 1-month LIBOR feel to .7756 from .7800 this time last week. Oil rose to $54.10 per barrel from $53.10 on increased tensions between the United States and Iran following an Iranian missile test, as did Gold, while the US Dollar and overall market volatility rose.

While the Fed left monetary policy unchanged last Wednesday at its first meeting of 2017, America’s central bank noted improved measures of consumer and business confidence of late. Presumably, improved sentiment will manifest itself in faster economic growth later this year. The market has been dialing back rate hike expectations in recent weeks. Just less than two 25-basis-point hikes are expected in 2017, down from expectations of three shortly after the Fed raised rates in December.

This Week: After last week’s event and data deluge it’s a light one this week. On tap is Tuesday’s US Trade Balance for December, followed by jobless claims and data on January US import prices and consumer sentiment, none of which is expected to move markets in any meaningful way. As usual, the week is peppered with scheduled speeches from Fed officials which will be watched closely for clues into the Fed’s thinking.

Take-Away: Last Friday’s jobs data and the showing of moderating wage pressures sent a strong signal to the Fed that there’s little urgency to hike rates any time soon.

Outside of the continual and potential market-moving stream of commentary and tweets from the Trump administration, markets are now looking toward Fed Chair Yellen’s semi-annual testimony before congress on Feb 14th & 15th for signals on how purported fiscal expansion and the development of a strategy for unwinding the Fed’s massive balance sheet will impact the course of interest rates. Before that, we’ll see the release of Tier 1 economic data on retail sales, industrial production, housing construction and sales for further insight into the billion-dollar question: Is rising consumer and business confidence finally filtering into hard economic data and, hence, economic growth? Consistent increases in consumers’ wages is a necessary component for this to occur, and while last week’s data on wages wasn’t encouraging, we’re confident we’ll see wage growth over the course of the year and are sticking to our forecast that the next Fed hike will occur in June. In the meantime, we’ll watch & wait. 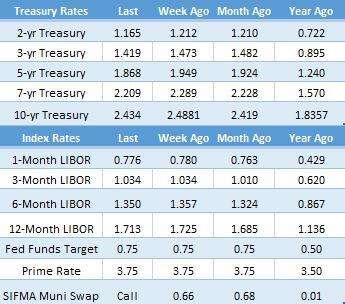 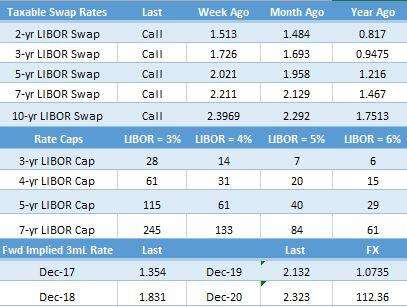 LIBOR Futures (current expectations of where LIBOR will trade in the future): 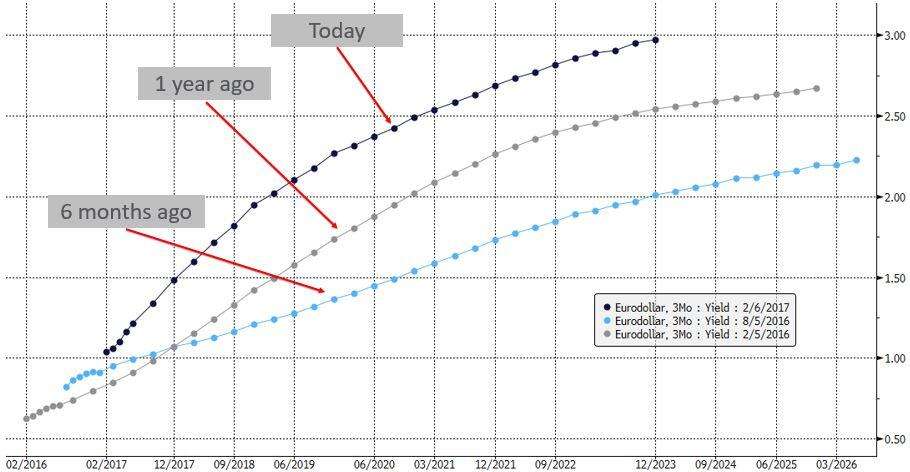