What the Fed has Right and Wrong About Inflation

What You Missed: Both long- and short-term interest rates fell only slightly, as equities were little changed on the week after renewed inflation fears rattled markets mid-week. The nominal yield on the US 10-year Treasury note wrapped the week at 1.62%, after lifting to 1.67% mid-week. 1-month LIBOR, SOFR and Bloomberg’s Bank Yield Index, BSBY, a contender to replace LIBOR, all fell or held steady throughout the week. Elsewhere, the price of a barrel of West Texas Intermediate crude oil fell $2.25 to $62.80 from last Friday, while the US Dollar weakened, and Gold strengthened. Treasury yield volatility, a key driver of the cost of rate caps and swaptions, fell steadily throughout the week.

Inflation is the buzzword in markets these days – does the Fed have it all wrong? Credit spreads are the tightest they’ve been since the Great Recession and many are rushing to borrow at ultra-low rates. We see this daily from our corporate, tribal, real estate and municipal clients, all seemingly rushing to secure new lines of credit. In the midst of it, the cocktail of soaring commodity prices, a sliding dollar and supply contrained factories are translating into higher prices for everything from semiconductors to milk.

While the Fed has gone out of its way to categorize these higher prices we’re all seeing as temporary, and therefore believes that the full-throttle stimulus it’s laying on the economy is the right thing to do until the roughly 7 million unemployed get back to work, it’s worth asking if the Fed’s strategy is the right one.

If you’ve been studying the economy and the Fed as long as we have, it’s not really fair to ask what the Fed has right or wrong about inflation, since no one will really know until it’s too late or irrelevant. The better question is to ask which risk is more realistic right now: disinflation, a slow but steady fall in the cost of things we all need for sustenance, or rapid inflation. The Fed says disinflation. Markets are saying the opposite, believing that disrupted supply chains, new technologies, massive fiscal spending and too-generous unemployment benefits are just too much froth to avoid a rapid spike in inflation. No one wants either scenario. High inflation would torpedo markets of all kinds that have become addicted to near-zero interest rates. Low and falling prices – deflation – are no less desirable, leaving companies saddled with record amounts of debt and no way to grow their way out of it.

It’s clear that the recent spike in inflation fears caught the Fed off guard, in that it probably occurred earlier than they expected. The question to ask now is at what point do the everyday prices we all pay for the stuff we need lead to inflation the Fed cares about? The answer is messy. If prices keep rising and wages don’t rise to compensate, we’ll buy less stuff, leading to what’s called stagflation. It’s what the Biden administration is trying to help avoid with the push for higher minimum wages and more unionization of employees. Another way to ask the question above is at what point will inflation in the most purchased items lead to a broad rise in wages – via factory and services businesses efforts to meet surging demand – a necessary ingredient for real inflation across a great expanse of the economy? With companies having a harder time filling vacancies these days, it’s natural to assume that higher costs for things, at some point, would put upward pressure on wages.

So far, broad spikes in wages just aren’t happening.  Where notable wage hikes are occurring is with low-earners, a trend the Fed is inclined to support, not squelch. Further, pandemic scars are fostering expectations of low wages and scant job prospects, which also cut against fears of rising inflation. All told, until vaccines are widely available across the globe, schools and childcare are fully reopened, health concerns dial back, and most importantly, a broad and sustained jump in wages shows up, the Fed will view any upward pressure on prices and wages as temporary. Until then, the Fed is tethered to keeping rates close to where they are now for fear that any sell off in risky assets – like stocks – would trigger a feedback loop, where those investors fleeing equities buy US treasury bonds, putting a natural cap on Treasury yields.

We’ll wrap this up by leaving you with the question: How far can yields rise before they upset the stock market and spur the Fed into action? Look for the answer in next week’s Straight to Smart.

News Flash: Fed says its thinking about thinking about tapering. The minutes of the Fed’s April monetary policy meeting were released last week and showed that several Fed members wanted to discuss curtailing bond buying at future meetings. In recent months, Fed Chair Powell has said that the Fed is “not even thinking about thinking about” tapering (aka pulling back on any of its stimulus efforts), so April’s discussion was a notable shift. Fed officials have said that they will communicate any change in the pace of asset purchases well in advance, and markets believe that the process will be spelled out this summer. However, the FOMC agreed that the economy was still far short of its longer-run goals.

Our Take: Are you tired of tracking the Fed’s every move in hopes that it will allow you to glean insight into your future economic fortunes? Not as much as we are (Try writing about it every week!?!). Too bad for both of us, because the Fed will stay front and center in our lives for years to come. Here’s why: the minutes of the April Fed meeting showed there’s broad consensus within the Fed that its easy money policies are just what we need right now, regardless of the inflation siren calls from markets and the financial media.

Even though the minutes showed the Fed has toned down the perceived economic risk from the virus, and upgraded the growth outlook, its determination to remain patient means tapering is still a long way off. Like we’ve said over and over and over, until the jobs market improves markedly, the Fed will let its current policy stance play out and won’t begin pulling back the stimulus punch bowl – initially by reducing the amount of Treasury bonds it’s purchasing – until next year.

States will help get the jobless off the sidelines. The job crunch looks to intensify in the coming months, as the low-wage unemployed seek to ride out the augmented unemployment benefits as they peter out in the fall. In response, more than 20 states in recent weeks have voted to end the additional $300 per week federal unemployment benefits early. Those benefits, which are set to expire nationwide in September anyway, will now end in many states as early as mid-June. That may help ease labor shortages in the low-wage leisure and hospitality sector which has seen a surge in unfilled job openings in recent months.

What to Watch This Week: The inflation theme will continue to be front and center in the days ahead, keeping markets guessing about the degree of its temporary nature.  It will show up in a likely double-digit pace of housing price growth in the Case-Shiller Index (Tuesday), to consumer-inflation expectation measures in both the Conference Board’s consumer confidence report (Tuesday) and consumer sentiment (Friday) surveys, culminating with core PCE deflator – a key gauge of personal consumption and therefore inflation – due to spike to the highest level in almost three decades.

Regardless of the attention-grabbing headlines that will forecast the impending, inflation-driven doom heading right at us this week, the Fed will consider them as distortions due to the COVID-driven, abrupt decline over the same period last year.

Expectations for big moves – either up or down – in Treasury yields are about as low as they’ve been in months, driving home that the jury is still out on where long-term rates are headed next. The 10-year Treasury yield, a bellwether for where rates are headed overall, is now stuck in a 1.50 – 1.70% range, with market participants flummoxed by some of the key questions looming over the economy, namely 1) will the rebound from the pandemic prove sustainable, 2) and will building inflation pressures be temporary, as the Fed maintains.

The next catalyst to break the monotony will come in early June with the release of monthly jobs data for May. The gauge on how well America’s job engine is functioning is especially important given the Fed’s focus on the labor market and considering that the previous report, for April, was much weaker than forecast.

In the meantime, a tailwind for the 10-year Treasury yield to move higher could come from Europe. An improving vaccine rollout and bets on an economic comeback have lifted 10-year German yields to the point where some are warning of a break above 0.00% for the first time in more than two years.

Big Picture: Even though data releases this week will likely spur the inflation debate anew, over the last couple of months, the economic gauges the Fed pays the most attention to have surprised both positively and negatively, specifically the most recent sets of jobs reports and data on retail sales. Despite this, the markets view of when the Fed will finally hike – via Fed Funds futures prices – have barely budged, still pricing for the chance of a first rate hike in late 2022 and fully pricing in a rate hike in Q1 of 2023.

Given the lack of any real movement in long-term interest rates during bubbling inflation fears in recent weeks, we’re beginning to question the market’s rate hike timing. The stop and go nature of the economic recovery will likely cause the Fed to push back the first hike until mid-2023 at soonest. We won’t get to see who’s correct – us or the markets – until later this year when the Fed begins to lay out a timeline for tapering and sheds light on the economic triggers it feels are necessary for easing off the gas pedal. 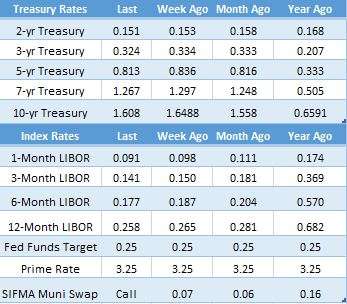 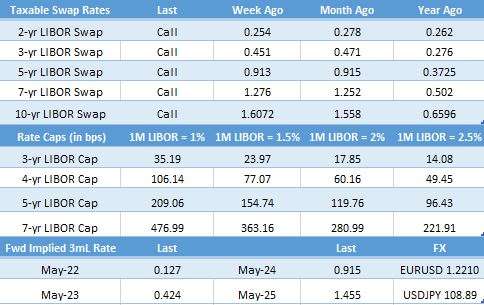 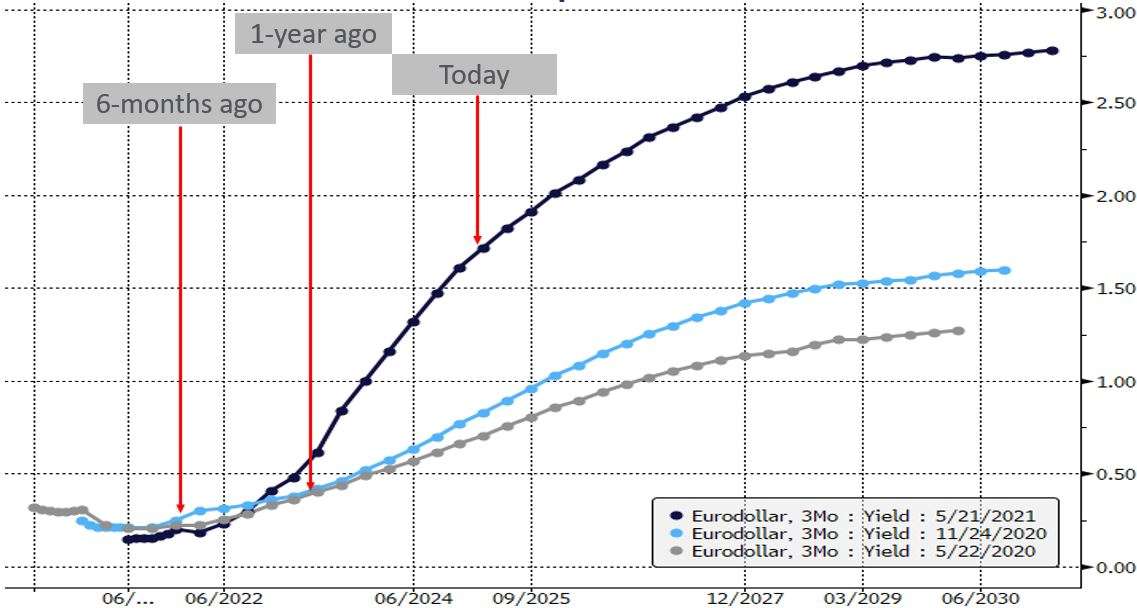 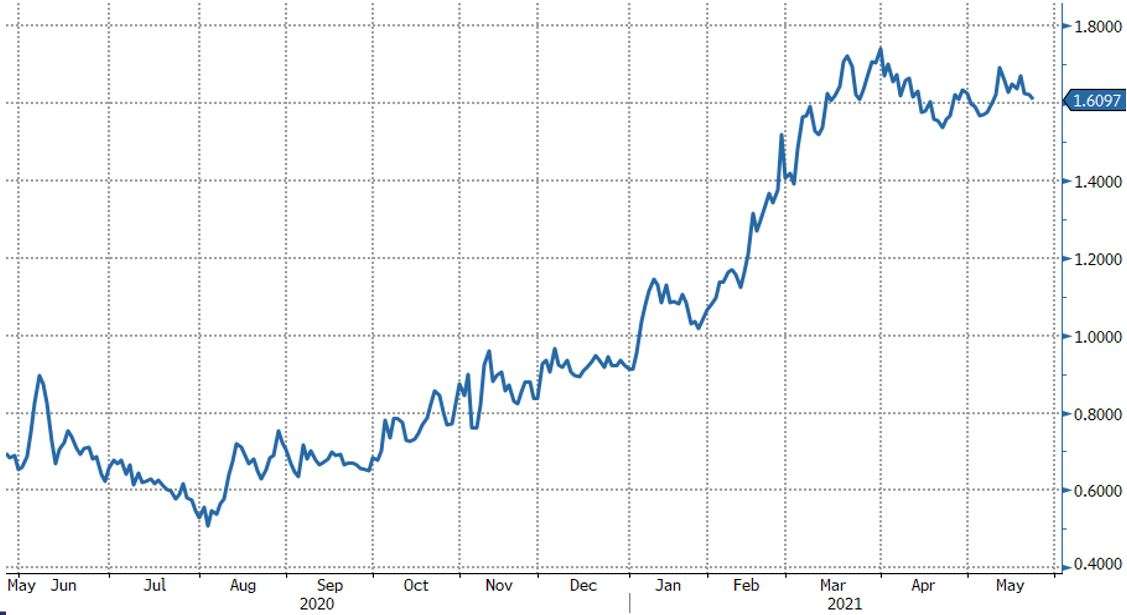