Last Week: Interest rates were mixed while equities climbed despite lingering worries over trade conflicts and a potential military strike against Syria. The Mideast tensions boosted oil prices to their highest levels since 2014, with West Texas Intermediate Crude oil fetching $67.50 a barrel, up $5 from a week ago. The yield on the US 10-year Treasury note rose 4 basis points to 2.82% from 2.78% the week prior as 1-month LIBOR fell to 1.8955% from 1.8971% over the same period. 10-year Treasury yield volatility, as measured by the Chicago Board Options Exchange Treasury Volatility Index (TYVIX), slipped to 3.5 from 3.82 last week. The US Dollar weakened, and Gold strengthened.

Trade tensions dominated market moves. The news flow regarding trade frictions and ongoing trade negotiations was relentless. The early focus was on conciliatory comments from Chinese president Xi Jinping on steps his country will take to open markets to foreign competition. Markets were buoyed by the tone of his remarks, viewing them as aimed at improving US relations. Chinese officials later stated that the speech was not a concession to the US and that China is prepared to retaliate. President Trump countered that he would not call the present action a trade war but rather a negotiation.

The Fed believes it will reach its 2% inflation goal. Minutes from the last Fed meeting showed that the Fed is increasingly confident it will reach its 2% inflation goal. Soft inflation data a year ago will likely push year-over-year inflation comparisons above the Fed’s 2% target in the months ahead, spurring some to conclude that the Fed is now leaning toward a slightly faster pace of hikes this year. Don’t believe it. As we said recently, the year-over-year inflation comparisons are unlikely to change the Fed’s slow and incremental path of rate hikes this year, as language in the minutes describing a “slightly steeper” path of interest-rate increases over the “next few years” really means that the Fed will extend its gradual, three to four rate hikes per year pace into 2019. While the Fed may be looking to move faster in the future, it won’t happen until 2019 at the earliest.

Syria is back on the market’s radar. Investors are paying increasing attention to events in Syria, specifically watching for any action from the US and allies such as France and the United Kingdom against the Syrian government in retaliation for an alleged chemical weapons attack on Syrian rebel-held territory. The presence of Russian forces on the ground in Syria complicates matters given growing tensions between the West and Russia over a variety of matters, including the recent poisoning of a former Russian spy and his daughter in England. Sanctions recently imposed by the US on several Russian oligarchs have hurt Russia’s financial markets. Any geo-political flare up will provide support to US Treasury yields and the Japanese yen as investors move funds to the traditional safe-havens.

What to Watch This Week: The days ahead will greet us with a slew of scheduled Fed speeches – the most in weeks –  and data releases on everything from manufacturing, retail sales, business inventories, industrial and manufacturing production, capacity utilization to housing. Amid the deluge, the stand out events are Monday’s release of March retail sales data and speeches by Fed officials, where markets will be listening intently for clues on the Fed’s thoughts on the ballooning US federal budget deficit, now believed to surpass $1 trillion by 2020, two years sooner than previously estimated.

The retail sales data – a key barometer of the health of the almighty US consumer, who drives 75% of US economic activity and just released this morning – barely rebounded from a three month slump. We don’t interpret it as a signal of economic weakness however, but rather as payback from a hurricane recovery -driven surge in spending by consumers in Q3 and 4 last year. Nonetheless, the moderate March rebound in sales isn’t sufficient to prevent a dip in overall personal spending, and hence GDP growth in the first quarter.

Take-Away: There’s lots of talk going around lately about the US government’s ballooning budget deficit, the necessary, looming large US Treasury bond and note sales needed to finance it, and how it will impact interest rates down the road. Further, markets want to know if the swelling financing gap will sway the Fed’s outlook for rate hikes.

The Federal deficit isn’t a problem that will be solved anytime soon, so we like to think about it in terms of how the ensuing Treasury bond issuances affects the Treasury yield curve and how the curve predicts future interest rates and the economy. So far this year the US Treasury’s increased bond issuance has focused on shorter maturities, and, combined with the December 2017 and March 2018 Fed rate hikes, has resulted in the flattest treasury yield curve in a decade where the difference between two and 10-year Treasury note yields are again  – after taking a breather when long term rates jumped early this year – less than half a percent. The flattening curve puts everyone on alert because if it becomes inverted, where short term rates are higher than long-term rates, then many believe economic recession will follow. While the curve has flattened once again, we don’t believe it will invert and will likely remain flat for years, as it did in the 1990s, while the economy continues to grow. The curve is also likely to get even flatter, as the Fed continues to hike short-term rates to prevent the economy from overheating.

While its fun to prognosticate, here’s what you really need to know: The flat and flattening yield curve offers unique interest rate hedging opportunities to lock in the cost of future financings that haven’t been seen in years. In the current world of higher interest rates, the smart borrowers are examining how the flat yield curve can work for them. Talk to us and learn how. 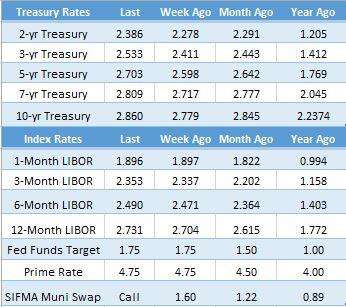 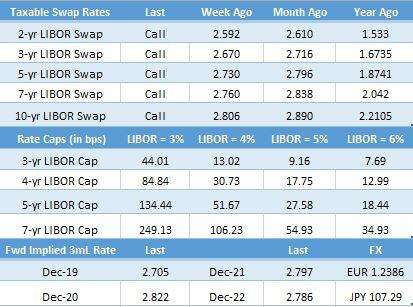 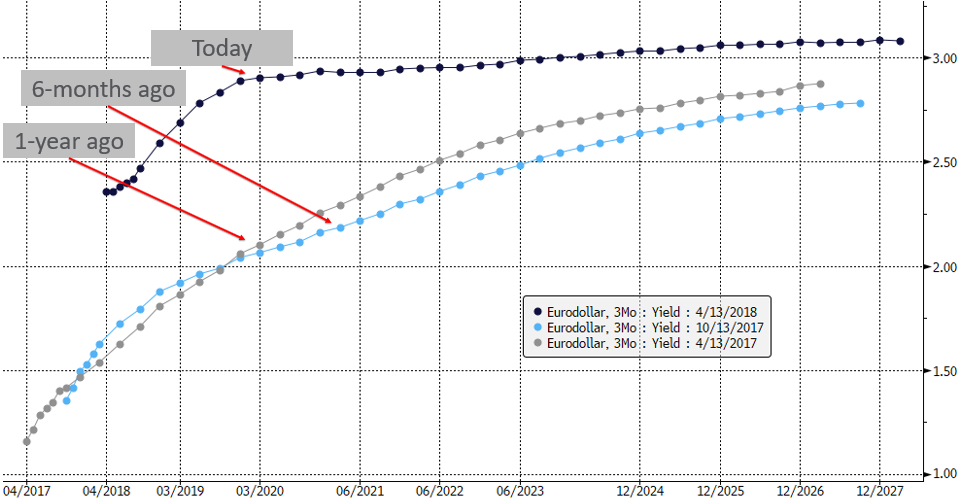 Borrow Fixed or Floating? Your Road Map to the Right Decision
Scroll to top