Why Risk Of Recession Is Low

What You Missed: Short and long-term interest rates rose, and equities were modestly lower on the week as markets absorbed signals of larger rate hikes and tighter policy from the Fed. The yield on the benchmark 10-year note reached 2.70% on Friday, the highest level since 2019. Short-term yields continued their ascent, with the 2-year Treasury yield peaking at 2.51% as 1-month Term SOFR rose to 0.41%. Elsewhere, the price of a barrel of West Texas Intermediate Crude oil fell further, to $96.05 from $100.60 a week ago. Elsewhere, the US Dollar and Gold both strengthened. Treasury yield volatility, a key driver of the cost of rates caps, swaptions, and other option-based interest rate derivatives, rose steadily through the week and remains near two-year highs.

Fed signaled larger rate hikes, faster balance sheet reduction. The minutes of the Fed’s March meeting revealed that policymakers are willing to hike rates toward neutral “expeditiously,” saying hikes in 50-basis-point increments could be appropriate, amidst the highest inflation readings in four decades. The minutes indicated that once a neutral policy posture is achieved (which most believe is a Fed Funds rate of 2.5%; it’s 0.5% now), a move toward a tighter policy stance may be needed. They also revealed that, if not for the market turmoil that surrounded Russia’s invasion of Ukraine in the early weeks of the year, many Fed voting members would have preferred a 0.50% hike last month over the 0.25% boost the committee approved.

Regarding the other tool the Fed has at its disposal to slow things down, the Fed’s discussions on reducing the size of its massive balance sheet revealed that the an accelerated reduction could start as early as next month, and that after a three-month phase-in period, the balance sheet could be reduced by up to $95 billion per month; $60 billion in Treasuries and $35 billion in mortgage-backed securities (MBS), roughly doubling the pace of the balance sheet reduction seen between 2017 and 2019.

The minutes also implied that the Fed may explore selling MBS on the open market once “quantitative tightening” is well underway. The 2-year 10-year Treasury yield curve steepened substantially after the release of the minutes, after going negative by 7 basis points earlier in the week and is now trading at roughly +20 basis points.

Our take: The minutes make it clear that the Fed prefers rate hikes to be frontloaded, and lays bare the Fed’s fear that inflation expectations – the rate at which consumers, businesses, investors expect prices to rise in the future and the degree to which those expectations impact spending and investment decisions today – will become unmoored, which the Fed now sees as a serious risk. As such, they now feel the need to act quickly, but not too quick, to avoid cratering economic growth in the process.

While $95 billion per month in balance sheet reduction sounds like a lot, don’t get too excited, the Fed’s asset holdings will still be above pre-pandemic levels at the end of 2024, both in dollar terms and measured as a fraction of GDP. The last time the Fed announced a sizable balance sheet runoff – at its September 2017 meeting – the unemployment rate had averaged 4.4 percent over the previous three months and core inflation was 1.4%. The overall balance sheet was $4.5 trillion (23 percent of GDP). This time around, the unemployment rate is 3.8%, core inflation is 5.4%, and the balance sheet is $9.0 trillion (37 percent of GDP). Given that the economy is at full employment and core inflation is roughly four times what it was in 2017, it seems the Fed has a green light to be more aggressive in its balance sheet reduction efforts.

Wrapping things up, there was no mention in the minutes about flattening yield-curves – which is sometimes seen as a predictor of looming recession – suggesting that their recent inversion will play a minor part in the Fed’s decisions, with red-hot inflation outweighing any growth concerns. The spread between the yield on the current three-month Treasury bill and wagers on where it will be in 18 months, obtained from the futures market, is the signal Fed policymakers view more suggestive of an imminent recession (keep reading for more on this). While this forward spread has typically moved in lockstep with the yield curve, it is now going in the opposite direction, countering recession calls.

What to Watch This Week: The latest inflation gauges are on tap, and while they’ll be sky high yet again, they won’t show inflation as elevated as one would expect given recent energy price jitters and supply chain snarls resulting from Russia’s invasion of Ukraine (Consumer Price Index – aka CPI, Tues.; Producer Price Index, Wed.; import prices, Thurs.)

It’s likely that prices moderated or even fell across several core goods sectors last month. That would be consistent with signs of a steep decline in freight activity. A more ominous potential explanation for a moderation in inflation last month is that consumers are pulling back on discretionary spending (retail sales, Thurs.) as consumer sentiment worsens (University of Michigan Consumer Sentiment, Thurs.), driven by high and rising prices.

While logical, the more likely, and more benign explanation for moderating inflation is that it reflects the expected shift in demand from goods back to services as the pandemic wanes. It also could mean that renewed supply-chain bottlenecks (Empire manufacturing, Fri.) would have to become more intense to impact inflation as much as they did at the height of the pandemic.

If the Fed’s (now muted) opinion that last year’s goods-driven price inflation will indeed be transitory is confirmed in the March CPI, and if it persists for the rest of the year, it will vindicate the view that inflation will slow on its own, denting the view that the Fed needs to hike aggressively to combat it. In that situation, the market’s current forecast of three 0.50% hikes this year may be a bit much.

Big Picture: There has been tremendous market anxiety about a future recession after the spread between two-year and 10-year Treasury yields inverted late last month. While the “2s10s” is no longer inverted, other parts of the curve still are. And worries about an economic downturn abound. As such, it’s vital to understand how the Fed interprets the curve to understand why it’s delivering a growth warning but not necessarily a near-term or even medium-term recession signal.

The Treasury curve’s steep front end giving way to back-end inversion indicates a dramatic slowdown in economic growth. At three years, the kink from very steep to inverted suggests an abrupt economic slowdown and a policy reversal by the Fed. However, the curve indicates that a slowdown will occur over the medium term, rather than all at once in 2022. And the Fed likely views the back end of the curve as speculative, rather than a definitive indicator of impending recession.

Long-term interest rates are thus viewed by the Fed as merely a reflection of future Fed policy and term premium. A steep Treasury curve out to three years, with more than 200 basis points separating the three-month and three-year yields, tells the Fed that the bond market anticipates an aggressive policy response to limit inflation in the short term. And, because the Fed wants to keep its efforts of forward guidance credible, it’s paying close attention to this section of the curve.

Worries about an economic slowdown emerge when the yield curve inverts after three years, because inversion suggests rate cuts. That, however, is purely speculative. No one can predict that far ahead with any real degree of precision. And, especially in the post-Quantitative Easing era, there are numerous distorting factors, such as the term premium, which has dulled any recession signals from the Treasury yield curve.

As a result, the Fed has abandoned the nominal Treasury curve as a guide for future policy. To gauge market expectations, it now uses the near term forward spread, which is the difference between today’s 3-month rate and the predicted 3-month rate in 18 months. And that metric shows a very steep near-term path, which gives the Fed confidence that they have plenty of runway to hike rates without spooking markets and tipping the economy into recession. 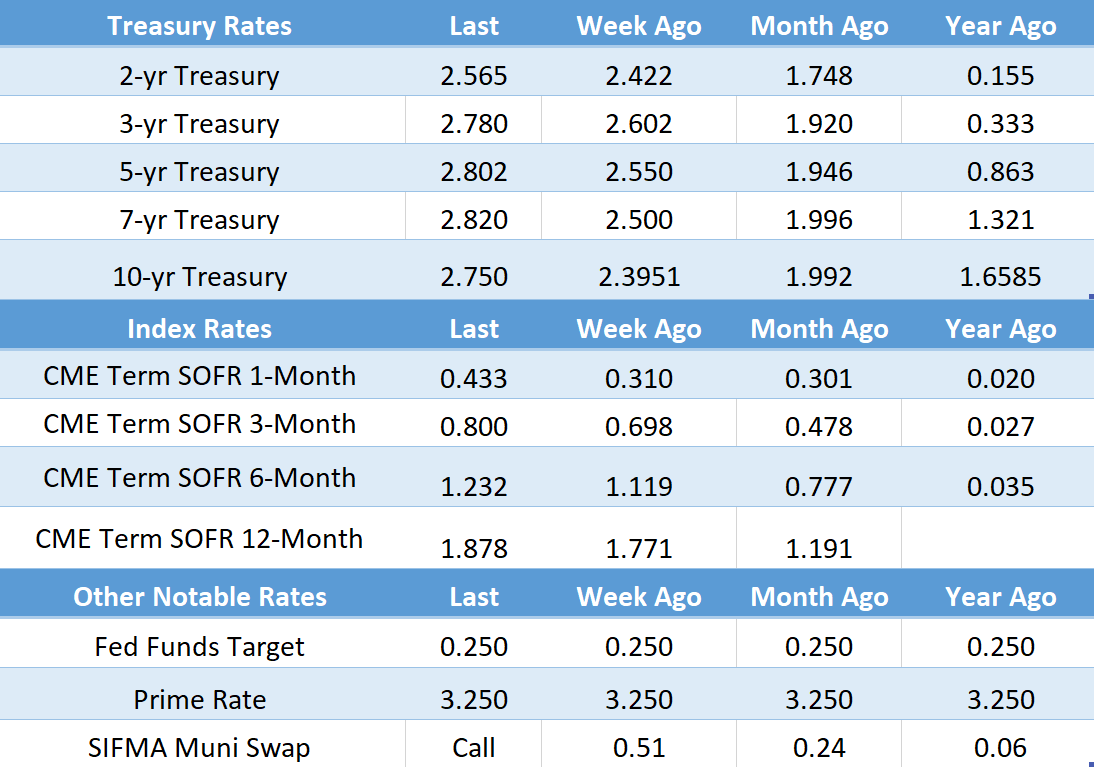 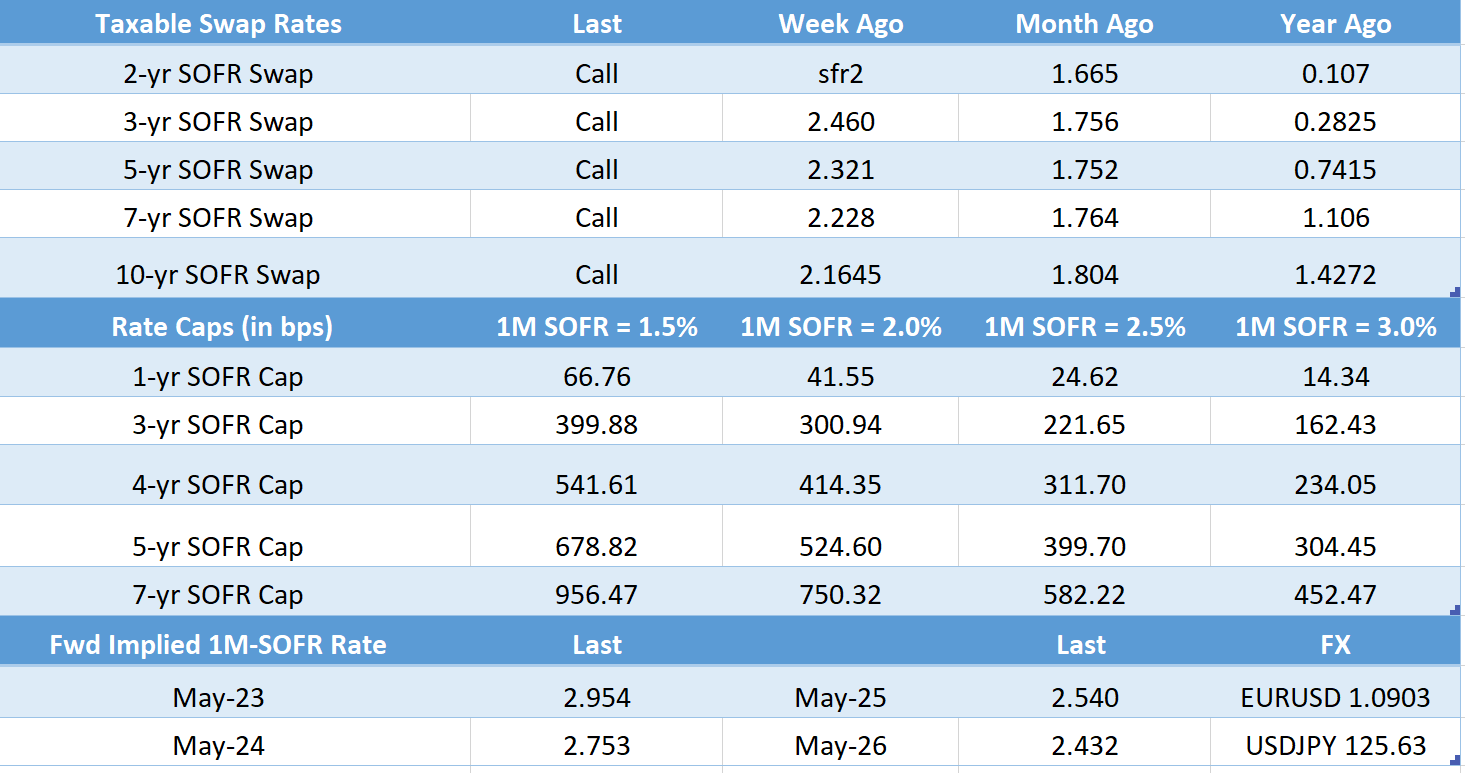 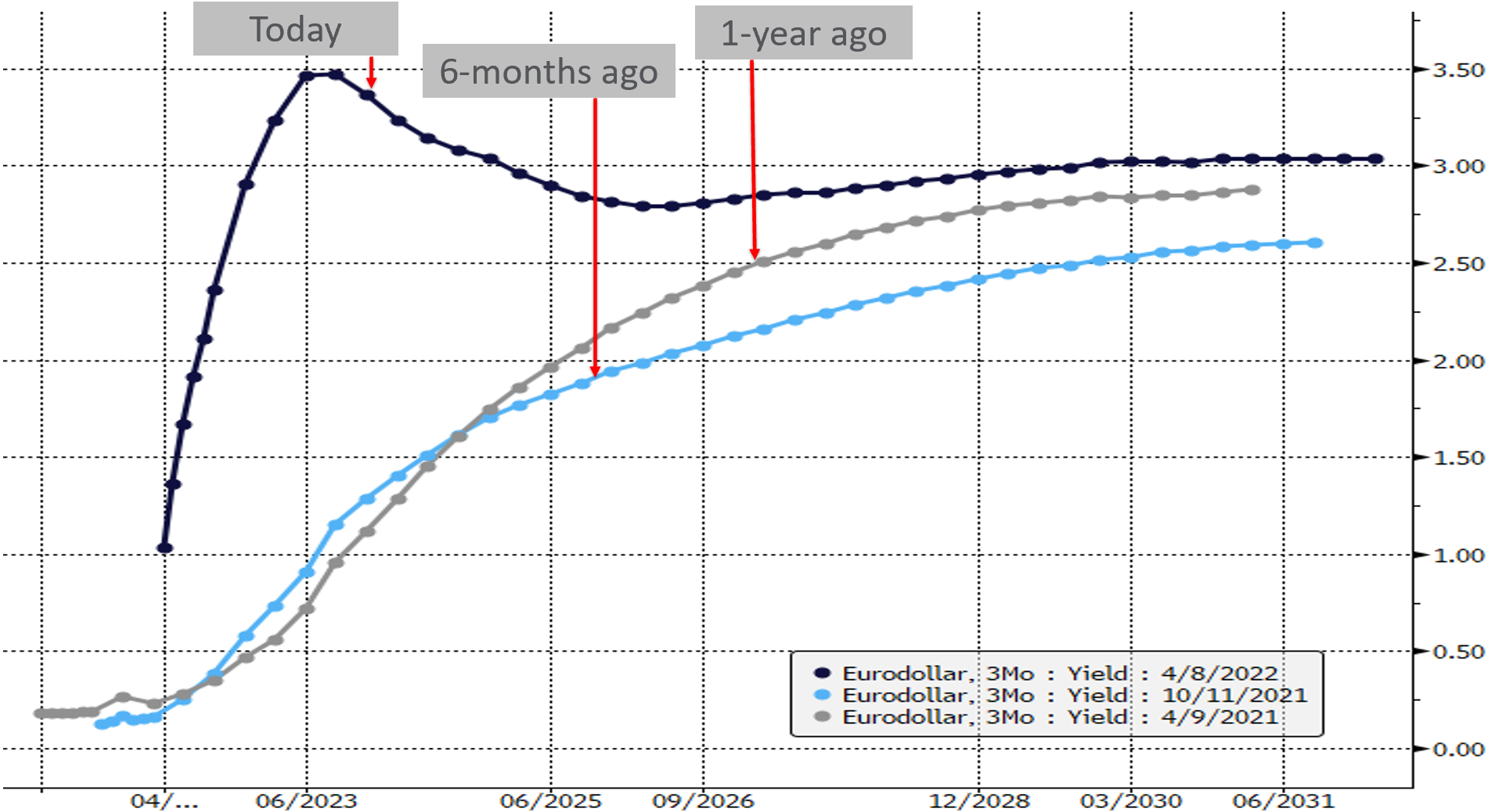 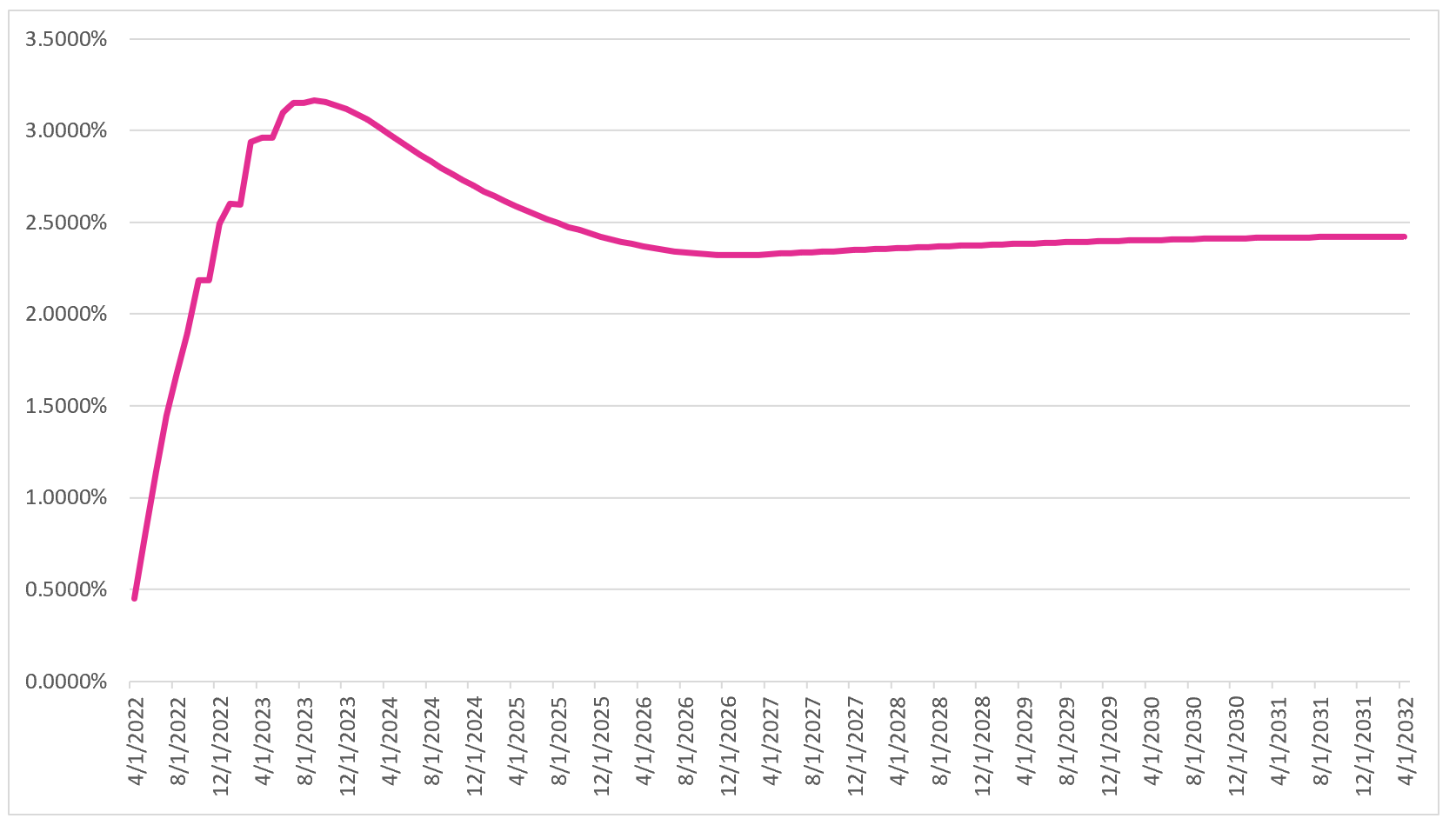 Has Inflation Peaked?
Scroll to top