What You Missed: Long-term interest rates finished the week about where they started, as equities rallied on mixed US economic data which soothed worries that the US economy will soon overheat. After testing the bottom of its recent trading range at 1.55% early last week, the yield on the 10-year US Treasury note traded at 1.61% at midday Friday, down 2 basis points on the week. 1-month LIBOR and SOFR continued to drift near all-time lows. The price of a barrel of West Texas Intermediate crude oil rallied $4.50 from week-ago levels, while the US dollar traded flat and Gold rallied. Treasury yield volatility, a key driver of the cost of rate caps and swaptions, continue to drift lower to levels last seen in February.

The Fed’s favorite inflation measure surged in April. On Friday, the US Department of Commerce reported that the core personal consumption expenditures index (PCE), the Fed’s favorite gauge of overall inflation, rose 3.1% year over year. The surge was far higher than the Fed’s preferred 2% level, which it has advertised ad nauseum over the years, even though the gauge has undershot that level on a sustained basis for more than a decade. Does this latest reading mean inflation is here to stay?

Our take: Fed officials believe the inflation surge, fueled largely by skewed year-over-year comparisons when the economy was at a near standstill, coupled with production bottlenecks, will be temporary and is determined to look through them. Are they wrong? We think not. Looking at another gauge of inflation – the consumer price index (CPI) – which was released back on May 12th, consider that close to 60% of the CPI’s month-over-month increase came from just five components: lodging, airfares, used cars, rental cars, and food away from home.  It is well understood that the increase in each of these categories is the result of acute supply-demand imbalances, and that each is likely to recover quickly after significant weakness, as the economy emerges from its pandemic stupor.

However, once the reopening impulse subsides, long-running disinflationary trends in place prior to the pandemic, as well as the roughly seven million currently unemployed, will serve as a drag on inflation. For evidence of this, look no further than flat-lined prices seen in other categories essential to any sustained rise in inflation: medical care services (0.0% in the CPI report vs. 0.1% prior), personal care (0.2% vs. 0.6%), and one of the biggest CPI components, rent of shelter (0.2% vs 0.2% prior). We’ll get the next read on the CPI on June 10th.

Regardless of your view, get comfortable with the inflation fear-mongers lurking around every corner throughout the summer as inflation gauges run hot, driven by supply shortages and aftershocks from fiscal stimulus, while year-over-year inflation comparisons continue to skew the data.

Other, mixed data releases backed up the Fed’s status-quo stance. Elsewhere, the Commerce Department reported that personal income, after surging 20.9% in March on fiscal stimulus payments, fell 13.7% in April. The savings rate remained elevated at 14.9%, while consumer spending rose a measly 0.5%. Other data released earlier in the week last week were also mixed, showing a slowdown in home sales as price rises and low inventories kept many buyers on the sidelines. Durable goods orders fell at the headline level although core orders rose. Q1 GDP was unrevised at 6.4%, while jobless claims fell to the lowest level of the pandemic at 406K.

All-told, US economic surprises have been to the downside lately, cooling fears that the Fed will have to abruptly shift away from its ultra-loose policy stance. The bond markets agree; the benchmark 10-year Treasury yield barely budged after the release of the surprising PCE data, treasury yield volatility continues its slow and steady decline, and one of the best market views of inflation – the Treasury yield curve – is no steeper than it was in early March – all conditions the Fed wants to see.

What could change the Fed’s view on inflation? Run-away expectations – perhaps driven by the financial news media – of inflation, to the point where they trigger seemingly irrational changes in consumers’ appetite for pretty much anything involving risk-taking. With the jobs market still in tatters, and a Fed that says repairing it is its #1 priority, evidence of unmooring would have to be clear and significant before the Fed considers shifting its current stance.

What to Watch This Week: The focal point in the holiday-shortened week is the always important jobs report on Friday. After the major disappointment in job growth in April, we doubt we’ll be disappointed again this time around, estimating that 700K in new jobs were created in May.

As we have all begun to venture out and about, the economy is reopening at a rapid pace, resulting in growing demand for, at the very least, discretionary services in recreation, travel and food services, all areas which should show strong jobs growth last month. In addition, plants recovering from supply shortages and severe lack of housing inventory likely also boosted job growth in the goods sector.

Looking further out in time, June and July’s jobs data will test whether the recent slowdown in hiring stemmed from Americans opting to receive unemployment benefits instead of seeking to get back to work, as augmented benefits will expire in half of the states across the nation.

This week is also the last opportunity for the Fed to clarify its policy views, considering recent data shocks, ahead of its blackout period before its next policy meeting on June 16th.

Big Picture: As the economy continues to improve and Fed taper talk grows to a chorus late in the year, the 10-year Treasury yield will likely approach and could even surpass 2%. Given the Fed’s laser focus on Americans getting back to work, the biggest catalyst to higher rates is a rapidly improving jobs market, hence the importance of May’s jobs data. With the real unemployment rate around 8.6% in April after adjusting for the pandemic shock to labor force participation, the Fed can afford to be patient in its judgment, for now. 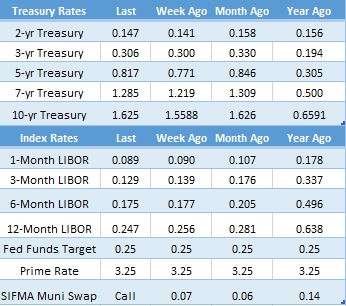 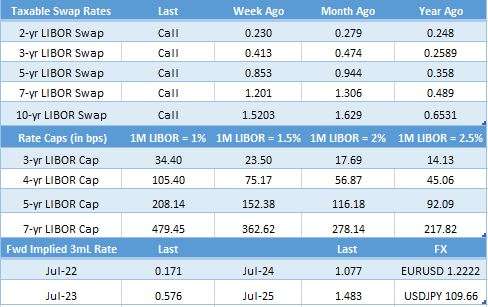 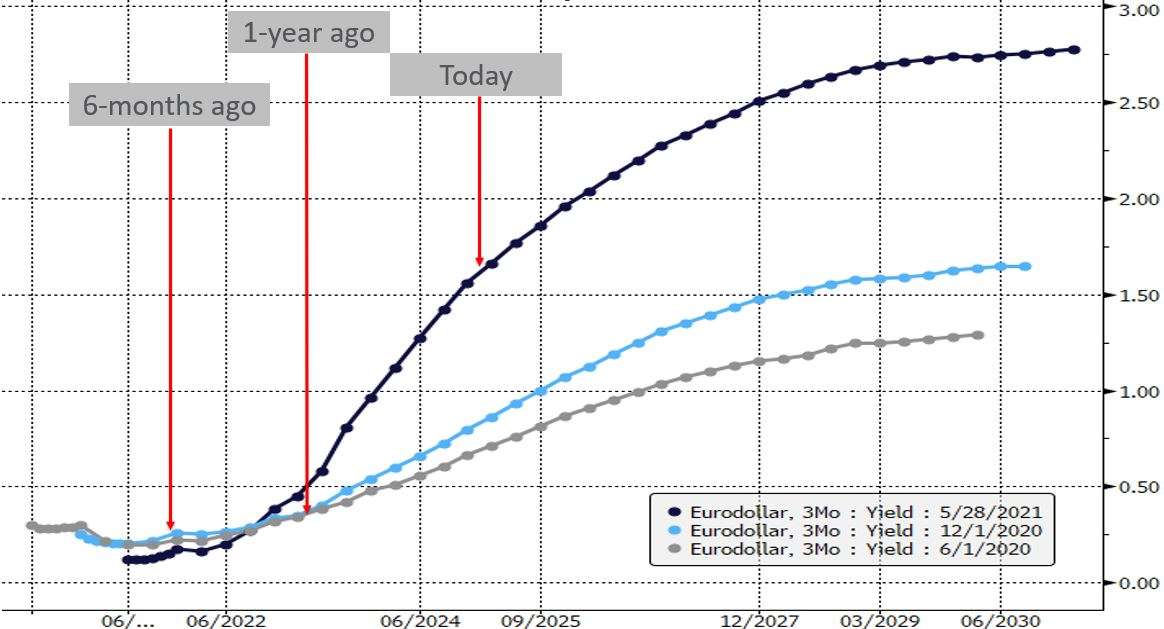 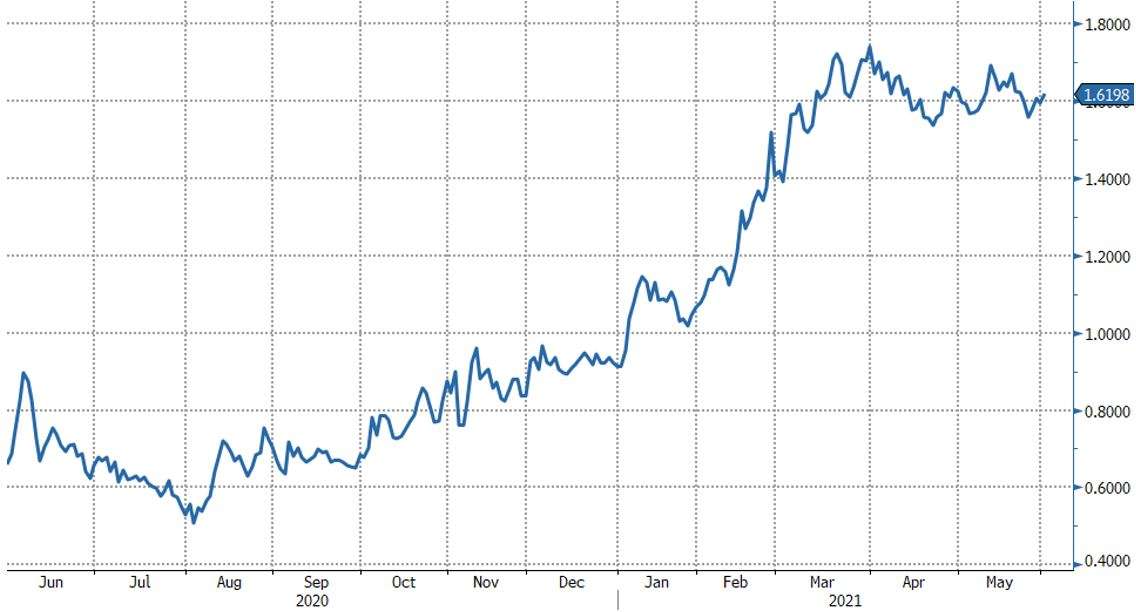 Tampering with Tapering
Scroll to top