Will Fed Live Up To Rate Hike Hype?

What You Missed: Long-term interest rates treaded water and equities were down on the week, as markets amped up bets of larger rate hikes from the Fed. The yield on the benchmark US 10-year Treasury note rose around 7 basis points to 2.90% from 2.83 this time last week. Most of the action in rates was at the short end of the curve, with the 2-year year Treasury yield and 1-month Term SOFR both posting sustained increases over the course of the week, finishing near 2.67% and 0.65% respectively. Elsewhere, the price of a barrel of West Texas Intermediate crude oil dropped to $101.85 from $106.84, as the US Dollar strengthened, and Gold weakened. Treasury yield volatility, a key but unseen driver of the cost of rate caps and other option-based interest rate hedges, rose throughout the week, steadying near 2-year highs.

The Fed said it’s going to move fast and break stuff. Fed Chair Jerome Powell reaffirmed the Fed’s commitment to taming inflation by employing all available tools, indicating that a 50-basis point hike in May is “on the table.” Chair Powell also said that, to tackle persistent inflation, which was 8.5 percent year over year in March, rate hikes would need to be phased in over time. As a direct result of the Chair’s comments, markets amped up their expectations of future Fed hikes, now pricing in 50-basis point hikes for each of the May, June, July, and September Fed meetings, which would take today’s 0.50% Fed Funds rate to 2.50% by the end of the year. Treasury yields surged on the news, particularly on the short end, when the 2-year Treasury rose to 2.73 percent from 2.50 percent earlier in the week.

Our take: Four 0.50% Fed rates hikes in a row? Really? It will never happen, as a series of hikes of that frequency and magnitude would certainly send America’s economy into recession, combined with a potential seizure of financial markets, both events the Fed wants to avoid. But what about inflation you say? Well, let’s take a minute to look at the economic backdrop at present:

Those are signals that tell us – barring some unforeseen, sustained spike in the price of oil – that overall inflation may have peaked. Does this sound like an environment that can tolerate four, 0.50% sequential rate hikes? We don’t think so. The more likely scenario in our opinion is a 0.50% rate hike in May, a 0.50% hike in June, followed by one or two 0.25% hikes through the end of 2022, after which the Fed will pause and reassess.

For those of you that like graphs, here’s a snapshot of the huge gap between rate expectations (the 5-year Swap rate) and Fed Funds. It’s a wide chasm that hasn’t been seen in years and one that will have to be reconciled soon. That reconciliation will happen via either aggressive Fed rate hikes or short-term rates coming off their lofty highs, or, more likely, a more muted combination of both: 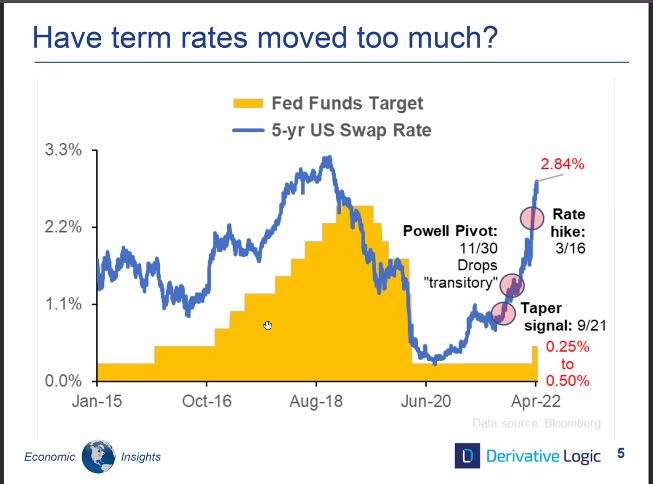 What to Watch This Week: The week begins with US financial assets on their back foot, after last Friday’s equity market sell-off and precipitous rise in short term Treasury yields. Faced with a mostly empty calendar of economic data releases, markets will instead wrestle with the signals provided by consumer and business sentiment and messaging from corporate earnings statements as they trickle in throughout the week.

After Chair Powell’s comments last week, the Fed confirmed that it’s aware of just how much wood it needs to chop urgently to tighten things up. Inflation data due out this week will almost certainly confirm the urgency: The Fed’s favorite wage indicator, the employment cost index (Fri.), will show that wage growth is quickening, with the jobs market running “too hot,” in Chair Powell’s words. The personal consumption expenditure deflator (Fri.), the Fed’s preferred price gauge, will likely suggest 6.7% year over year growth, backing claims that high inflation, while likely moderating, will stay elevated for months to come.

Despite recent calls of a looming US recession, economic fundamentals remain solid enough. Q1 GDP data (due Thursday) isn’t expected to reflect that though, with a subpar result expected due to interruption from the omicron variant earlier this year. We suspect more lackluster growth signals through the summer but anticipate a growth in Q3.

Big Picture: Rising rents combined with a hike-ready Fed make at least a couple of near term, jumbo rate hikes all but a certainty. Rents are now rising by double digits, and with housing components making up about a third of one of the Fed’s favorite inflation gauges – e.g., the Consumer Price Index (CPI) – it’s also a certainty that high inflation, while likely moderating, will be with us for a long while.

In the meantime, expect continued volatility in rates – and high rate cap costs that emanate from it – until it’s clear what timetable the Fed will be forced to follow to bring inflation back in check. 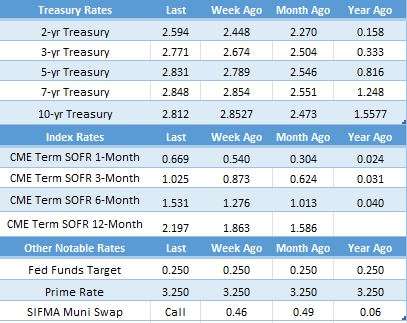 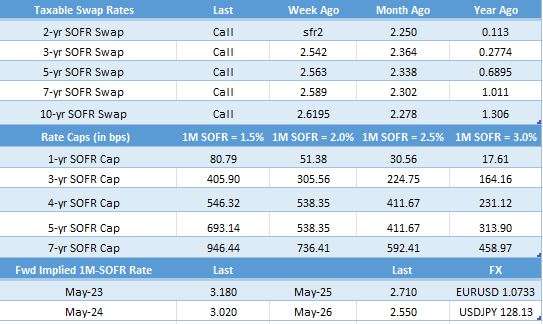 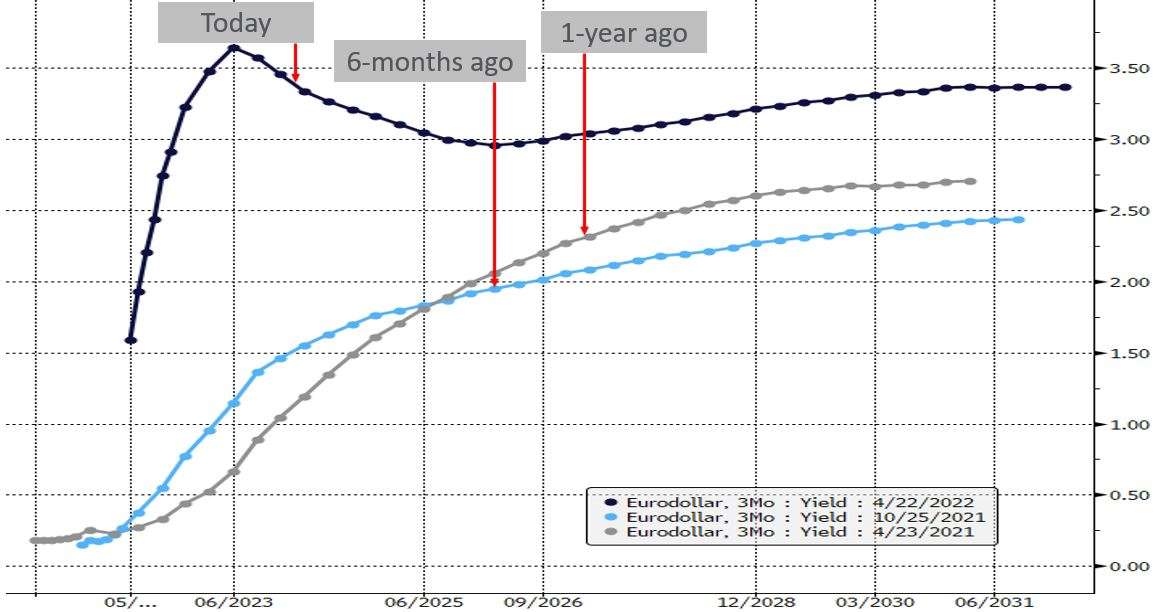 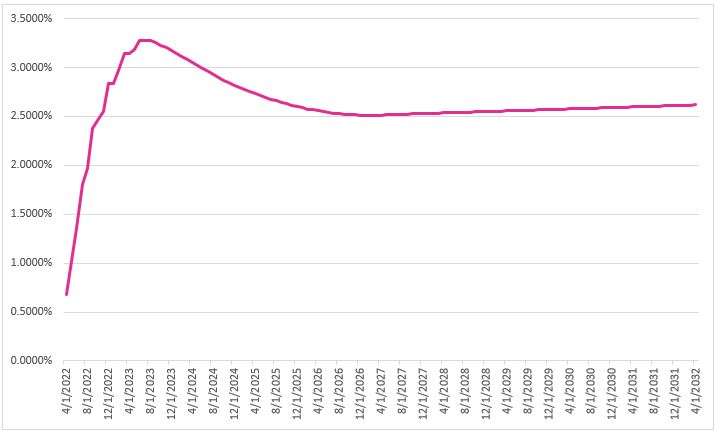 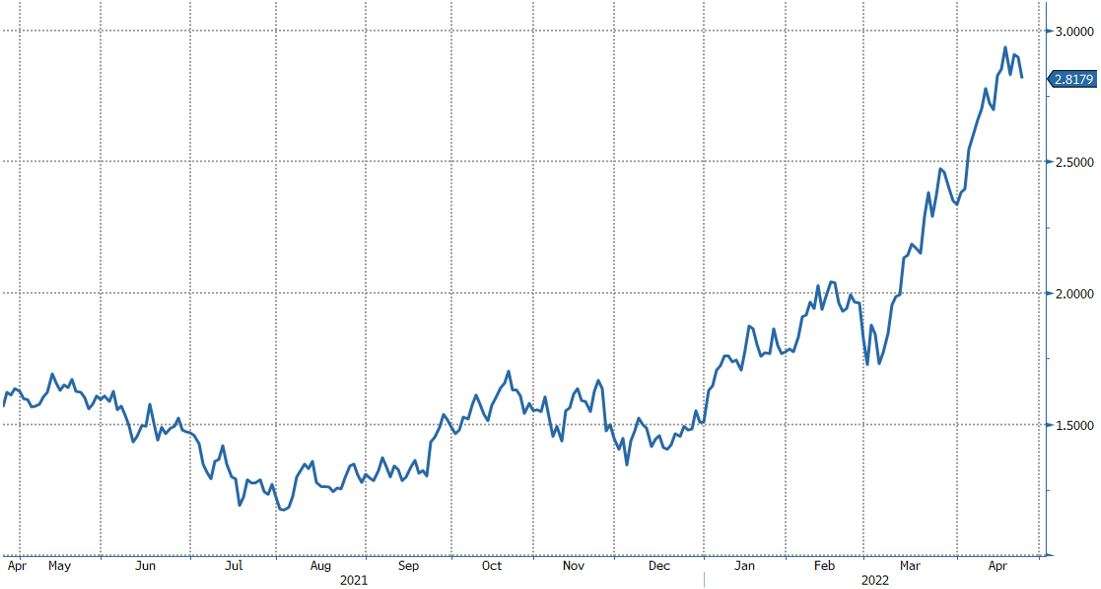