Last Week: US interest rates fell as equities suffered their biggest weekly decline since February, mostly in response to rising US bond yields. The yield on the 10-year US Treasury note fell to 3.16% from a high of 3.25% early in the week as investors sought out safe assets amid an uptick in both equity and bond market volatility. 1-month LIBOR followed suit, settling at 2.2797% after falling slightly from the week’s high of 2.28%. The rate moves spurred a resumption of the months-long trend of curve flattening, which regained momentum during the week as shares sank. Oil sold off from its recent highs as the US Dollar weakened and Gold strengthened. The Chicago Board Options Exchange Treasury Volatility Index (TYVIX) fell to 3.93 from 4.42 this time last week.

Stocks and bond yields’ reciprocal relationship was reinvigorated. For months, US equities have ignored macro issues such as the deepening US-China trade rift and have advanced despite typically weak seasonal patterns ahead of US midterm elections. Equity markets finally woke up to those factors and others last week, including an upside breakout in long-term interest rates. Historically, escalating bond yields have prompted equity investors to question future earnings and growth assumptions, but this dynamic had broken down in recent months.

Some interesting stats on the recent rise in US Treasury yields. In the 30 trading sessions from August 24th through October 8th, yields on 10-year US Treasury notes increased 22 times (73% of the time). That’s the highest percentage of up days for yields since May 1984. While markets of late have reacted to new information by rapidly repricing, the grinding selloff seems illustrative of a momentum-driven environment where selling begets selling, often pushing bond prices into oversold territory. In addition, since the 10-year Treasury has now backed away – once again –  from the massive 3.25% resistance level, it seems it could be awhile before we see the 10-year firmly above it.

More signs emerge that China is struggling to counter the effects of trade tariffs. The People’s Bank of China announced that it will reduce the ratio of reserves most commercial banks must hold by 1%, to 14.5%. The change in policy is the fourth such cut this year and comes amid China’s attempts to support its domestic economy via a variety of means, including tax cuts and infrastructure spending. Meanwhile, China’s trade surplus grew even larger last month, hitting a new record high of $34.13 billion. President Trump and Chinese President Xi Jinping announced they’ll meet at the G20 summit in late November, but we doubt much will be accomplished. As we have said repeatedly, China will ultimately cave to many of the US trade demands, as its economy is far more dependent on US exports than we are on Chinese imports, however, the issue will drag on for months, easily beyond the new year.

The IMF cut its global growth forecast. The International Monetary Fund, citing trade protectionism and instability in emerging markets, downgraded its global economic growth outlook for this year and next. It now sees global gross domestic product growth of 3.7% in 2018 and 2019, down from the 3.9% estimate for both years in April. The IMF forecasts a 2018 US growth rate of 2.9%, supported by tax cuts and other fiscal stimulus. Downside risks to global growth have risen in the past six months while the potential for upside surprises has receded, according to the World Economic Outlook. The forecast flies in the pace of gang-buster US growth, prompting some to ponder the trillion-dollar question: Will the US economy eventually slow to meet the cadence of global growth or will we drag the rest of the world out of its growth funk?

What to Watch This Week: A plethora of market data awaits in the coming days that will lend much greater insight into how the US economy will perform through the end of the year. Data on business inventories, industrial production and housing starts will all serve to build America’s growth picture in the coming months. We think all signs will point to continued strength in the economy and add to the already high probability of a 0.25% Fed hike in December, although market optimism has now been dented by escalating trade tensions and market volatility.

However helpful for forecasting the economic trajectory, this week’s data deluge will likely be drowned out by the market’s focus on volatility and if it will force the Fed to alter its planned pace of rate hikes. Back in February when US equity markets last took a big dive, the Fed looked past the tumble and hiked in March regardless. Some doubt the Fed’s resolve this time around, dialing back confidence in at least three hikes next year. Will the Fed blink? We don’t think so, as it has historically avoided any association between equity market performance and monetary policy, and last week’s equity market rout, while newsworthy, is far less that what was seen in February of this year. However, a deeper, prolonged sell off in stocks and a sustained, further rise in Treasury yields would change our mind.

While markets will be especially attuned to the week’s full calendar of scheduled speeches by Fed officials for clues, we’re certain little will be revealed as Fed officials are normally very tight-lipped on the topic of equity market volatility and its effect on Fed policy.

Take-Away: While the big moves we’ve seen in rates over the last two weeks are certainly noteworthy, it’s important to put them into context to gain a better sense of what they mean for the future. Without boring you to tears with concepts like implied volatility, take us at our word when we say that last week’s big move in rates and equities pales in comparison to what we saw in February of this year, where they both moved in a much more dramatic fashion.  The difference this time around is that the most recent spike in market volatility occurred with large swings in underlying equity and debt prices, a dynamic that largely didn’t exist in this year’s previous tumult. It means that there’s much more momentum behind the move, keeping markets on edge as players contemplate weather a sea-change is slowly occurring. For now, we’re maintaining our view that we’ll see at least three to four more 0.25% Fed hikes through 2019,  and that robust but slowing economic growth and contained inflation will put a cap on longer-term yields. 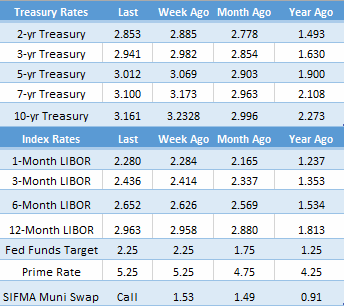 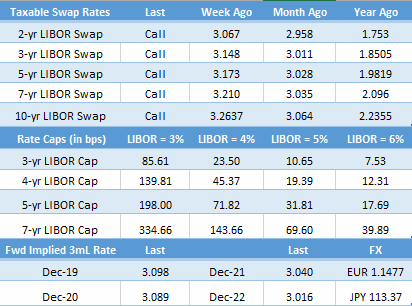 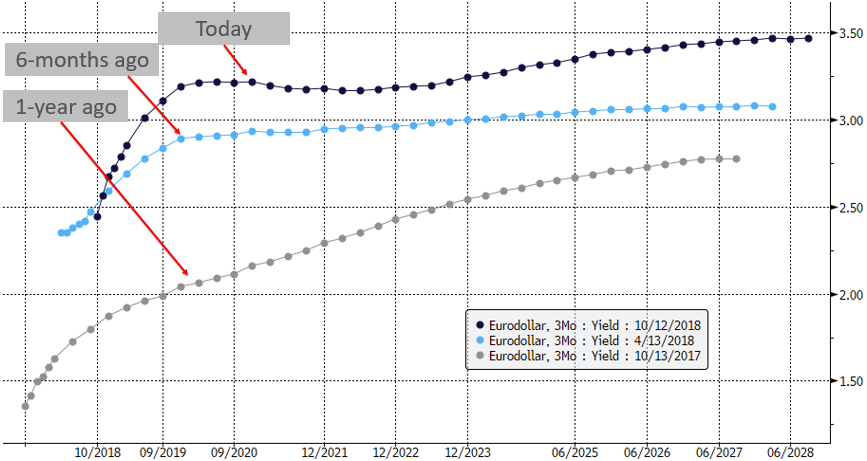