Will the Fed Hike as Much as Markets Believe?

What You Missed: Long-term interest rates rose, and equities traded little changed as a chorus of Fed officials went out of their way to let the world know the Fed is preparing to hike. The yield on the US 10-year Treasury note stabilized from this time a week ago, after brushing the 1.80% level, settling near 1.78%. Short-term rates like LIBOR, SOFR and BSBY, continued to bounce near recent lows. However, the yield on the 2-year US Treasury note shot up by 20 bp’s during the week in anticipation of more Fed rate hikes than expected (more on this below). The 2-year UST yield has now gained more the 60 bp’s over the past 2 months. The price of a barrel of West Texas Intermediate crude oil rose to $82.65 from $79.15, as the US Dollar weakened, and Gold strengthened. Treasury yield volatility, a key but hidden driver of the cost of rate caps, fell slightly from elevated levels.

Inflation hit a 40-year high. The US Consumer Price Index (CPI) rose 7% year over year in December, the fastest pace since June 1982. Price gains remained broad-based, with autos and housing among the key contributors to the rise. December marked the third month in a row that inflation exceeded 6%. Addressing the situation head on during his confirmation hearing before the Senate Banking Committee Fed Chair Jerome Powell calmed markets, expressing resolve on the fight against inflation without appearing panicked.

Our take: The CPI data showed strong demand and supply bottlenecks still at play, with prices for goods (versus services) driven higher by auto and apparel prices. Prices for services fell, a dynamic that may prove misleading over time, with shelter costs – aka rents, which are one-third of the CPI gauge – set to be a growing source of upward inflation pressure this year. All told, the data puts pressure on the Fed to start winding down policy accommodation in short order. It will take time, between two and four Fed meetings, for the Fed to sort it out.  For now, markets are expecting rate hikes to begin at the Fed’s March meeting, with as many as four, 0.25% hikes priced in this year.

We doubt the Fed will hike that much this year, as everyone seems to forget how markets react once the Fed starts down a path of successive rate hikes: overall economic activity slows and prices for goods and services ease off their highs. In short, once markets and businesses see the Fed actively hiking in succession, inflation pressures will ease and economic activity will slow, allowing the Fed to scale back its hiking plans out of fear they’ll trigger a recession. Additionally, the Fed will likely lean on the unwinding of its balance sheet to manage long-term yields more than most expect.

Looking ahead a few months, the path of inflation will be determined by whether the impact of repeated supply chain disruptions outweighs the impact of consumers’ reduced desire for discretionary services. While we predict year-over-year inflation to climb further next month, CPI inflation will decline sharply after March, to around 4.7 percent in mid-2022 (from 7.0 percent today) and 2.8 percent by the end of next year. That projection is dependent on rising energy prices, as predicted by the futures curve, and our anticipation that housing costs will rise substantially.

Retail sales slumped.  December retail sales got hit with a double whammy of omicron-hit demand and supply disruptions. Consumers, seemingly worried about getting sick, pushed off discretionary spending, staying away from furniture, electronics, and clothing stores. Meanwhile, motor vehicles and non-store retailers’ performance was shattered by a lack of inventory. The value of overall purchases decreased 1.9%, after a revised 0.2% gain a month earlier. The figures aren’t adjusted for inflation, suggesting price-adjusted receipts were even weaker than the headline number. However, last month’s decline in overall sales capped an otherwise outstanding year for retailers. Total retail sales increased by more than 19% in 2021 compared to the previous year.

Our take: The year-end drop in retail sales points to a sluggish start to the first quarter. The data illustrates the impact of both the omicron variant and rising prices – nudging consumers to scale back their spending on services like travel and dining out. All told, it’s supportive of our view that household spending will decrease over time, helping to slowly erode inflation’s upward momentum. Also supporting that view are declining inflation-adjusted salaries, shrinking savings, and the cessation of government pandemic-related financial programs, which together, will slowly tighten consumer’s purse strings over many months and allow the Fed to scale back its hiking plans somewhat.

Omicron peaking? The Omicron version of the coronavirus appears to have peaked in both New York and London, following the pattern established in South Africa, with the number of new cases dropping rapidly in recent days. While hospitalizations have recently increased dramatically, the seven-day moving average of fatalities has not. In terms of their approach to the virus, officials in various communities are gradually shifting from a pandemic to an endemic perspective. Regardless, the super-infectious variant calls into question the common understanding that each consecutive Covid wave has a reduced economic impact than the previous one. With about 800k new cases being reported every day in the United States, and modelers at the IHME predicting that half of the population will be infected by March, omicron has put a lot of people in quarantine in a short amount of time. Widespread absenteeism has resulted in firm closures and worsening labor shortages, as well as a drop in service demand. The dynamic gets real when one considers that US GDP likely plunged around 12% in the first two weeks of the year.

Our take: While we’ll avoid the temptation of being armchair epidemiologists (you know who you are), from fifty-thousand feet, its looks as if Omicron will have a quick and substantial impact on America’s economy, followed by an equally quick and powerful rebound. The blow will be felt most acutely in the first quarter, with faster growth in the second half of 2022, when nearly all the lost economic ground will be made up.

What to Watch This Week: This week’s data calendar will provide a better picture of the Omicron wave’s perceived economic impact. Initial jobless claims (Thursday) are expected to climb as more workers who were laid off from shuttered firms seek unemployment benefits. Several gauges on tap will help clarify if supply bottlenecks, which had been easing in the run-up to Omicron, have re-intensified (Empire Manufacturing Index, Tuesday; Philly Fed Outlook, Thursday).

Recent statements from Fed officials clearly imply that most Fed members are uniting behind a rate hike in March, something that was hinted at during the December meeting. Expectations of upcoming rate hikes may prompt potential homebuyers to accelerate their purchases (NAHB Housing Market Index, Tues.; existing house sales, Thurs.), keeping housing demand high despite limited inventory (housing starts, Wed.).

Big Picture: It’s widely believed that rate hikes primarily drive up policy-sensitive short-dated Treasury yields, resulting in a flatter yield curve as 10- and 30-year bonds rise at a slower pace. That consensus view also implies that rate hikes will slow growth and inflation, which seems by no means assured given how historically low rates will remain even after this year’s expected cycle of rate hikes.

For this reason, and despite the financial news media’s incessant coverage of looming Fed hikes, we still think the Fed may hike more cautiously than most believe, using balance sheet runoff instead – slowly raising long-term interest rates – to blunt the yield curve-flattening impact it’s hikes will have. Short-term rates will rise further, and long-term rates will do the same, just later and not as much.  While everyone should prepare for a 0.25% rate hike in March, how high will rates rise this year? For that, check out our Annual Rates Forecast.

Talk on the Street: This section is devoted to anecdotal observations by asking local businesses how they are enduring amid the pandemic.  It’s a practice us armchair economists frequently use to get a pulse on the economy.  A recent visit to a local picture framing shop provided some insight into supply chain issues, switching vendors, and customer demand.  The owner, with over 30 years’ experience, said the last couple of years was the busiest.  Orders for framing were backlogged and presented a challenge to keep up with customer demand.  Two years ago, they switched buying their frames and paper from China to Indonesia and Thailand.  The cost was lower for frames and paper, but the quality of the paper was sub-par.  Why the increase in demand?  The owner suspected people having to limit their pre-Covid days activities, spent their time rummaging through closets and boxes finding pictures and photos waiting to be framed. 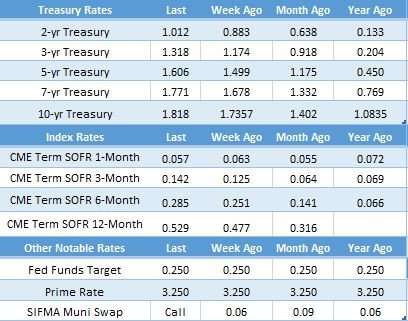 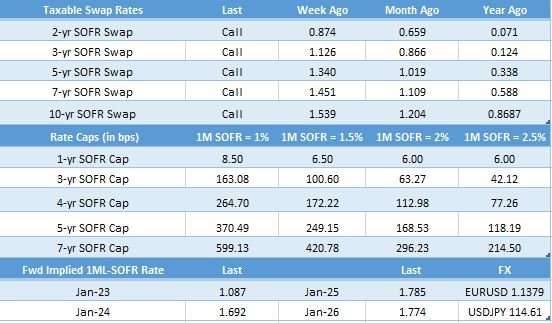 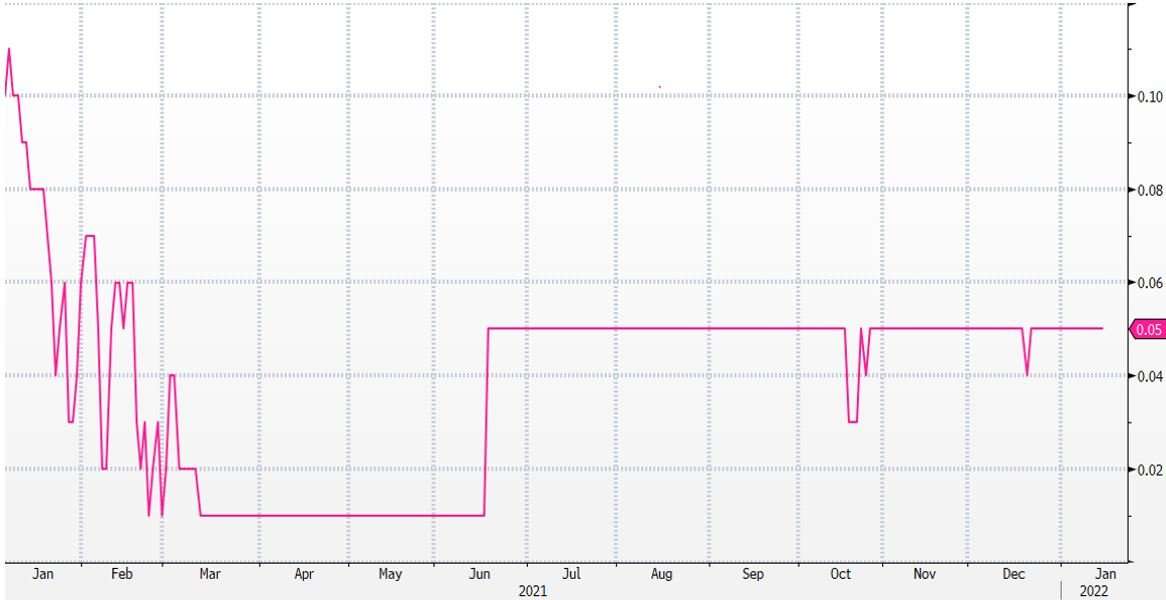 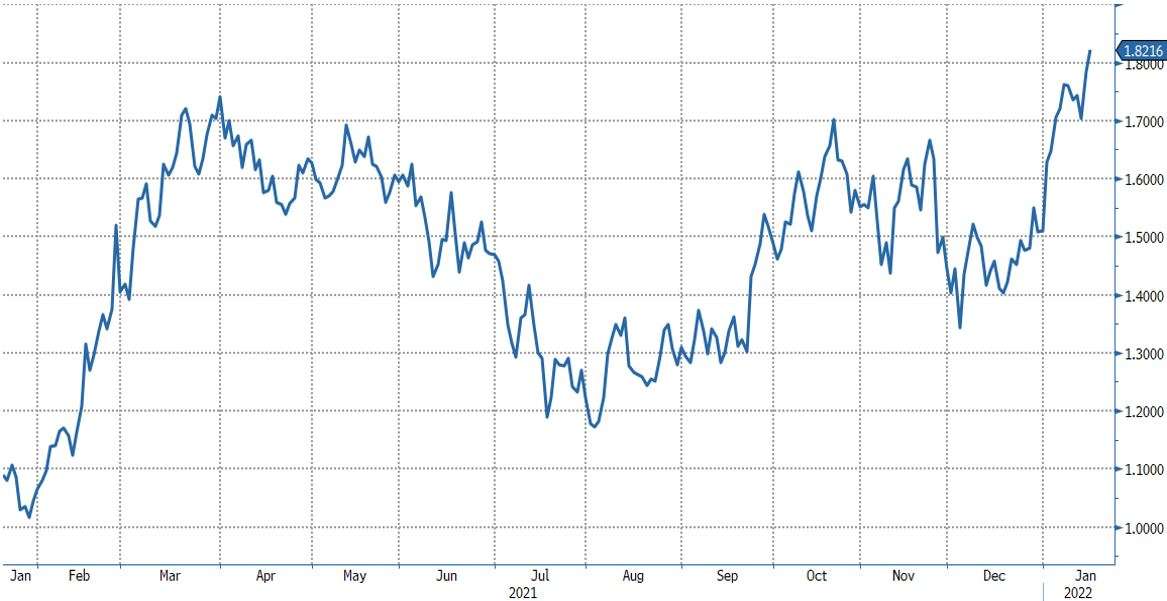 Click here for more DL Reports
Is The Fed Getting Aggressive?