What You Missed: Long-term interest rates fell, and equities lost ground on the week as several Wall Street firms downgraded their Q3 growth outlooks and drove investors into the safety of US Treasury bonds. The yield on the 10-year US Treasury note wrapped the week at 1.34%, down three basis points. Short-term interest rates, like 1-month LIBOR, SOFR and BSBY, bounced along near all-time lows. Amid lingering supply disruptions resulting from Hurricane Ida, the price of a barrel of West Texas Intermediate crude oil hovered within its recent range, at $69, as the US Dollar strengthened, and Gold weakened. Treasury yield volatility, a key driver of the cost of rate caps and other option-based interest rate derivatives, fell modestly.

Our takeaways from the California Mortgage Bankers Association CREF conference. To the many individuals we’ve worked with in the CRE industry over the years, it was wonderful to see you after so long! We left the conference with the following takeaways:  1) Despite a lighter attendance than what we’ve seen in years past, most that we spoke with were generally positive about business and the collective mood and energy was quite upbeat. 2) Lenders are out in force, with banks, insurance companies, CMBS, debt fund, credit union, and private lenders all actively looking for deals. Agency lenders – Fannie and Freddie – are still seeking multifamily deals of all shapes and sizes. 3) Industrial and multi-family properties continue to be the most desirable sector to lend on. Non-traditional office (e.g. life science, flex, medical) product, grocery-anchored retail, and credit single tenant net lease (STNL) are also sought-after properties. 4) Lending appetite for hospitality-related assets is finally starting to thaw after being frozen for much of the pandemic. 5) Bridge lending is becoming increasingly competitive. Bridge lenders are willing to entertain the risk levels associated with light and heavy lift retail. Again, it was great to catch-up with so many friends and partners, and we look forward to seeing you next year! For those we missed at the conference, we will be sponsoring at Globe Street Apartments October 26th and 27th in Los Angeles.

Fed preparing to taper? The Wall Street Journal reported Friday that Fed officials are preparing to announce at their November policy meeting their intention to reduce the pace of the central bank’s $120 billion per month bond-buying program. As of now, their plan is to conclude asset buying by mid-2022. The report was in line with the market consensus and had little impact on interest rates.

Our take: If you’ve read this newsletter over the past several weeks, you know that this news falls right in line with our expectations of tapering. As long as the jobs market improves, household spending patterns remain resilient, and consumer demand stays afloat, the Fed will drop heavy hints of its tapering plans at its September policy meeting, lay out a formal plan of such at its November meeting, and begin tapering in earnest in December.

Lingering price pressures still a threat to the recovery. Is it enough to nudge the Fed closer to tapering? The Producer Price Index (PPI) – a measure of inflation based on input costs to producers of goods – has accelerated for much of the year as supply bottlenecks and material shortages created inflationary pressures. The most recent reading – for August – showed that inflationary pressure remains, advancing 0.7% (vs. the 0.6% consensus estimate) after a 1.0% gain in July. August reading was 8.3% higher than the year-ago level.

Our take: The August producer price index showed upward price pressures are still in the pipeline. Should factories choose to pass these higher input costs onto consumers in the form of higher retail prices, consumer confidence will be dented and buying plans could be delayed, curtailing real spending. With consumer purchases driving nearly 70% of America’s economic activity, you can see the potential problem here.

Is it enough to shift the Fed into tapering gear sooner than expected? We’ll have to wait and see on that. This week’s Consumer Price Index data (keep reading) will be key in determining if recent inflation readings are truly “transitory”, allowing the Fed to hold course, or if they’ll feel compelled to act sooner than expected.

Weekly jobless claims fell to a pandemic low of 310k. While extended unemployment benefits nearing expiration on September 6th were one possible culprit, the data tells us that the delta variant hasn’t prompted a wave of mass layoffs as once feared. Even though states can tap into the $350 billion pool of pandemic funds provided in the American Rescue Plan to continue providing assistance to unemployed workers in the coming weeks, hiring weakness residing in mostly contact-intensive jobs implies that hiring improvements in other sectors will continue into the fall and give the Fed more reasons to taper in December.

What to Watch This Week: On the heels of a very disappointing August jobs report, consumer price data – released Tuesday via the Consumer Price Index (CPI) –  will take center stage in the coming week. We’ll be scouring the data for any signal that inflation is running hotter than the Fed expects, and if it is, the potential for the Fed to ease off the stimulus throttle sooner than expected.

Looking to last week’s Producer Price Index (PPI) for clues on how the CPI performed – recent data suggests that there’s an almost 1:1 relationship between the two inflation gauges – we expect that inflationary pressures continued to build last month, but that the CPI held near the 5.4% YOY rise seen in July. Even though the bulk of price rises in things like cars and construction material have passed, price increases stemming from storm damage from Hurricane Ida and chip shortages will test the 5.0%-5.5% CPI range that defines the Fed’s comfort zone.

Other indicators released this week will provide further guidance on whether we’re still on track for the commencement of a Fed taper in December. Retail sales (Thursday) and the University of Michigan consumer sentiment index (Friday) will reveal whether weakness in July continued into August. Jobless claims (Thursday) will clue in on the strength of the labor-market recovery. The NFIB small business optimism survey (Tuesday) and Empire manufacturing survey (Wednesday) will provide more color on compensation plans, hiring difficulties and price pressures.

Big Picture: As updated gauges loom large in the minds of markets and anyone exposed to interest rates, the Fed will be deliberating how to best handle tapering asset purchases amid higher-than- expected inflation and a weaker-than-anticipated labor market.

The string of high inflation readings month after month is causing many to scratch their heads, puzzled as to how the Fed can continue to think inflation is temporary, and doesn’t yet warrant a policy response. What these head-scratchers are missing is one key ingredient to the Fed’s inflation calculus: inflation expectations.

What are “inflation expectations”? The rate at which people – consumers, businesses, investors – expect prices to rise in the future. Actual inflation depends, in part, on what people expect it to be. If businesses and consumers expect prices to be 5% higher over the next year, they are more likely to accelerate anticipated purchases, raising demand today and pressuring prices higher sooner.  This increased demand, rising profits, and expected higher cost of living will, in turn, drive workers and their unions to demand similar-sized raises. Inflation expectations serve as a guide for actual inflation and are critical to determining whether America ends up with a Goldilocks outcome: just the right amount of inflation; not too much, not too little.

Today’s inflation scenario contrasts sharply with the 1970s and early 1980s, when bursts of inflation touched off upward spirals of inflation expectations, wages, and then, big spikes in prices of goods and services. Eventually the Fed – headed by our hero, Paul Volcker (we have a framed portrait of him in our headquarters and tip our hats to it in respect daily) – broke the circle of pain by drastically hiking interest rates, lurching the economy into deep recession. By firmly controlling inflation expectations since, the Fed has bought itself space and credibility to see through “transitory” spikes in prices – even big ones like what we’re all witnessing now.

Our biggest fear? It’s not rising inflation, but rather the opposite: low and falling inflation in the midst of massive fiscal and monetary stimulus. In such a scenario, the Fed and macroeconomists would face an existential crisis over how to move inflation up after having used most of the stimulus tools in their toolbox. 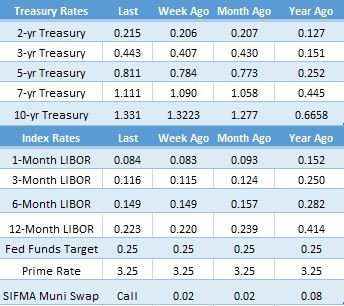 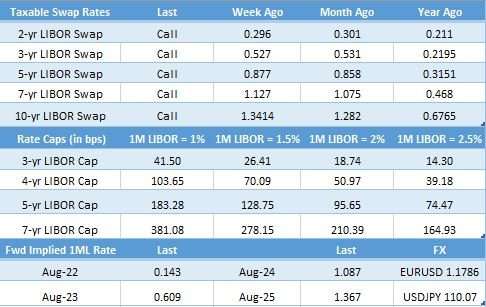 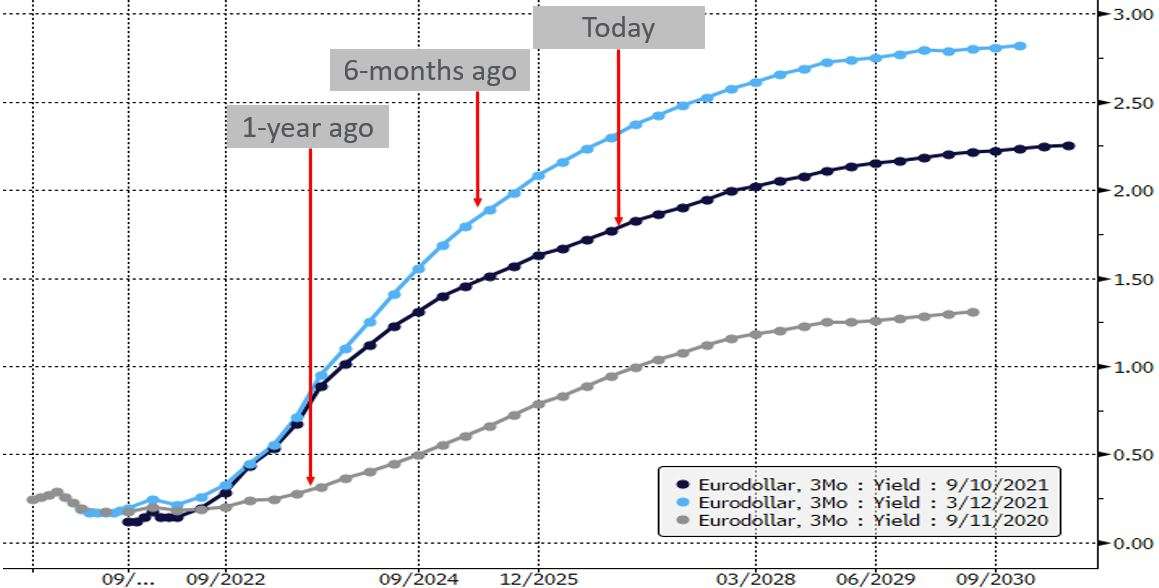 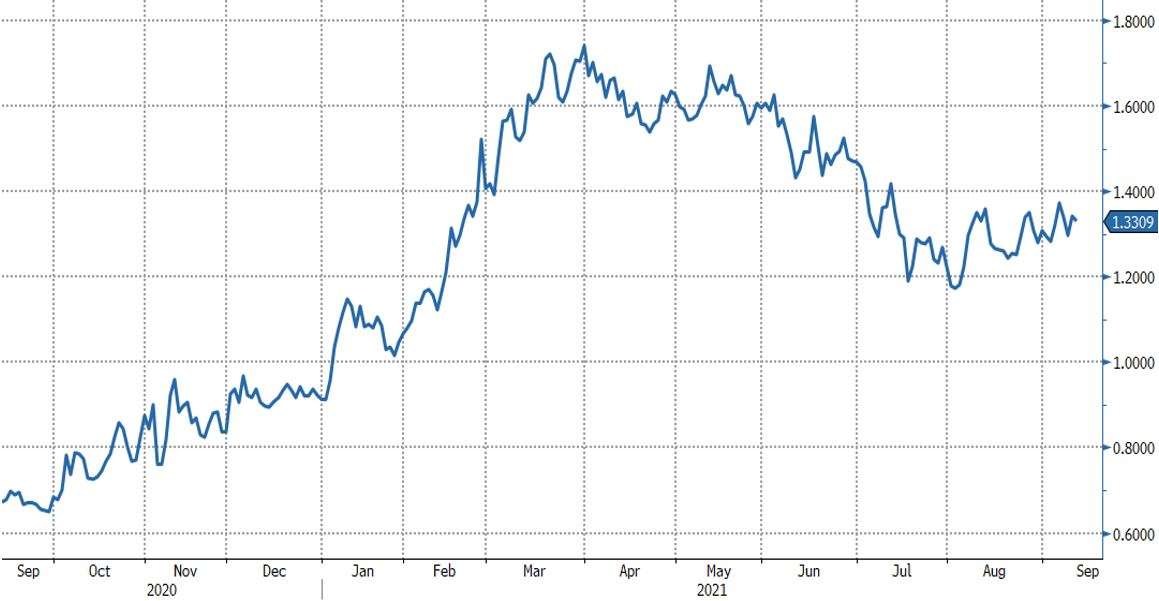 Get Ready For The Taper Tease
Scroll to top