Last Week: Long term interest rates fell, and equities were lower on the week amid a backsliding US economy, as the continued surge in coronavirus infections, lack of progress toward a COVID-19 relief bill, and deadlocked trade talks between the EU and the UK all conspired to thwart economic progress. The yield on the US 10-year Treasury note eased to 0.89% from 0.95% a week ago, while 1-month LIBOR rose slightly and SOFR traded flat. The price of a barrel of West Texas Intermediate crude oil rose $0.75 to $46.75, while the US Dollar strengthened, and Gold weakened. Treasury yield volatility, a key driver of the cost of rate caps and swaptions, staged a steady decline throughout the week.

Congress’s stimulus negotiations at an impasse. The COVID-relief logjam reached a new level last week, as talks remain deadlocked as the end of 2020 approaches. While the overall size of the plan no longer seems to be the main issue, how the funds are divvied up, and under what conditions, is. Republican lawmakers continue to insist on liability limits to protect businesses, educational institutions, health care providers, and other organizations from coronavirus-related claims. Democrats continue to press for substantial additional funding for state and local governments to defray increased costs and revenue drops caused by the pandemic. There had been hopes that a relief package would be made part of a must-pass government funding bill, but in the next few days lawmakers are likely to instead pass a stopgap measure that would fund the government through December 18th, while continuing talks on pandemic relief over the holidays.

Our take: We are now close to an economy at stall speed, as depressed consumer finances and inaction from Congress on fiscal relief has the potential to generate significant pain at year-end, and into Q1. Last month’s less-than-inspiring jobs report, the most impactful piece of economic data on interest rates, showed that America’s job-creation engine is sputtering. It could be an ominous sign of things to come, as households’ assess their finances – and their ability to keep spending to drive the economic rebound – remain significantly below their pre-pandemic levels. The lone bright spot – imminent vaccine distribution – will take time to play out, leading to our expectation of weak job creation again this month, range-bound interest rates, and an eventual pickup in economic growth in Q2 of 2021.

Jobless claims surged to highest level since mid-September. Weekly jobless claims, one of our preferred high-frequency gauges of the pandemic’s damage on the economy, surged by 137k to 853k last week, the highest level since mid-September. The increase was in-line with deteriorating momentum evident in other high frequency data. The weak jobs market and the expiration of CARES Act programs will intensify the economic damage from new pandemic restrictions and will limit near-term holiday spending prospects. However, despite the gloom, higher income households with elevated savings, amid a record high US stock market, could more than offset holiday spending weakness elsewhere.

Our take: The jump in claims is consistent with our expectation that the next jobs report – released in early January – could show a significant decline in job creation, reinforcing the need for immediate fiscal stimulus to bridge the gap of dwindling support from government and the eventual economic relief from widespread vaccine distribution. In the near-term, it is a recipe for range bound long-term interest rates.

How the stimulus negotiations could play out. We expect that a new stimulus package will pass eventually, likely to the tune of $1 trillion or so, and finally show up sometime in Q1. If nothing comes before year-end, which looks increasing likely, and Republicans retain the Senate after two runoff elections in Georgia, Congress may struggle to agree on even $500 billion to $750 billion aid in 2021.

Europe is an increasing drag on long-term US interest rates. As widely expected, the European Central Bank (ECB) eased financing conditions further last week, adding an additional €500 billion to its Pandemic Emergency Purchase Program and extending the program’s term for at least another nine months until March of 2022. The central bank will offer three additional targeted long-term repurchase operations in 2021 to provide funding to banks at deeply negative rates, and it extended reinvestments under its asset purchase program until 2023. ECB President Christine Lagarde repeatedly stressed the bank’s intention to maintain favorable financing conditions going forward, which market observers infer will translate into the ECB tightly controlling rates along the yield curve.

Why you should care: The ECB’s moves at injecting more stimulus into their economy – where the 10-year yields of nearly all the governments’ bonds are firmly negative – will only increase the drag on long-term US Treasury yields moving higher anytime soon. Here’s a thought for you; the ECB is projected to own around 43% of Germany’s sovereign debt by the end of next year and around 40% of Italy’s. The ECB’s buying spree sent Spanish 10-year yields into negative territory just last week.

What to Watch This Week: The days ahead are all about Wednesday’s Fed policy meeting. While no one expects America’s central bank to hike or cut rates, we’ll be hyper-focused on any announced or implied change to the Fed’s stance of providing additional support to the economy, predominantly through even more aggressive asset purchases.

At present, the state of the world should be to the Fed’s liking: market functioning remains orderly and financial conditions are accommodative. This implies that the Fed’s current pressure on the quantitative easing gas pedal will be sustained as Fed Chair Powell & Co. seek to refine their messaging around the economic conditions which would warrant a change in pace. For now, with fiscal stimulus negotiations floundering, the jobs market showing signs of strain and lockdown measures increasing in severity, the Fed will continue to be biased toward doing more, not less, on the monetary stimulus front.

On interest rates, the Fed is walking a tight rope. On one hand, higher long-term rates can signal greater confidence in the recovery and, indeed, the Fed would welcome them if they’re accompanied by rising inflation expectations. But the flip side is that rates that climb too much also raise long-term borrowing costs, one of the last things the economy needs with the pandemic raging and millions still out of work.

Big Picture: Stimulus, stimulus, stimulus. It’s all we hear about and write about these days. With all the government stimulus flooding the economy these days, it begs the question: will it ever spur the much hoped-for inflation and eventual rise in interest rates? With the US 10-year Treasury yield topping out just shy of 4% post-2008 financial crisis amid trillions spent in stimulus, and more likely on the way, it’s a question to keep in the back of your mind.

We’ve seen this movie before. Following the 2007-09 recession, critics of the Fed’s quantitative easing programs sounded the alarm about unbridled inflation that never materialized. We expect 2021 to be similarly plagued by unwarranted inflation alarmism, and therefore, long-term rates to remain low, for the foreseeable future, as spare economic capacity, elevated unemployment, and tepid household-income growth will put a lid on overall price pressures.

There is no doubt that Covid-19 has changed many facets of the economy, but the proclivity toward sub-2% inflation remains intact. This gives the Fed an extremely long runway before it will need to legitimately contemplate the arrival, let alone a potential overshoot, of its 2% average inflation target, and raise interest rates to combat it. In short, get comfortable: Ultra-low rates are here to stay for a while yet.

How is your business positioned for such a rate environment? 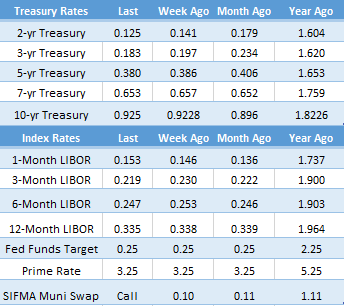 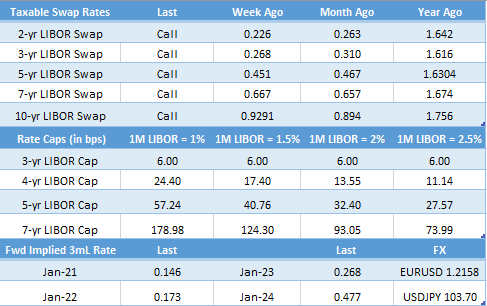 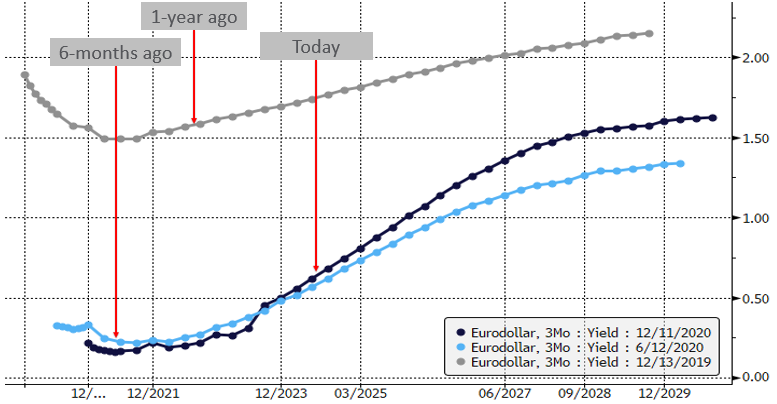 Rates Battle Royale: COVID Mortality vs Vaccine Optimism
We use cookies to give you the best web experience. If you continue to use this site it is deemed you consent to this site's use of cookies.OkPrivacy policy
Scroll to top