Your Inflation Fears Are Inflated

What You Missed: Long term interest rates fell as equities ran in place for a second consecutive week amid the ongoing debate around inflation. The yield on the benchmark US 10-year Treasury note declined to its lowest level in a month, falling to 1.47%, as markets firmly came around to the conclusion that the Fed is not anywhere close to tapering economic stimulus. 1-month LIBOR and SOFR continued to drift at all-time lows, with the former touching 0.072% mid-week. Elsewhere, the price of a barrel of West Texas Intermediate crude oil continued to rise at $71.05, as the US Dollar strengthened, and Gold weakened. Treasury yield volatility, a key, hidden driver of the cost of rate caps and swaptions, drifted lower throughout the week.

Latest inflation gauge wowed, but markets shrugged it off. Okay, we’re sick of writing about inflation, especially since we think, like the Fed, that current inflation pressures are indeed transitory. The following will be all we mention about it for a while, but we leave you with something to ponder. According to the Minneapolis Fed calculations, one month ago the implied probability (inflation options market) of inflation expectations averaged 3.00% over the next 5-years was 44%.  Now that probability has fallen to 32%. Go figure.

The May Consumer Price Index (CPI) report – one of the Fed’s favorite gauges of inflation – showed for a second straight month that reopening-sensitive areas of the economy are the source of most of the price spikes we’re all seeing. Before we dive in, it’s time for a refresher on the difference between “headline” versus “core” measures of inflation:

From the perspective of one’s cost of living, it makes no sense to exclude food and energy prices from consideration, right? If so, why do we even use the core measure as an inflation gauge? In short, history tells us that it’s less volatile than the Headline number and captures the underlying trend in prices better.

May’s report showed that, with energy prices edging lower last month, Headline CPI rose by 0.6% m/m, +5.0% y/y, the highest since August 2008, and up from the +4.2% seen in April. Core CPI inflation rose to a 28-year high of 3.8% last month, up from April’s 3.0%. While scary on the surface, like the surge in prices in April, about 65% of the price increases were driven by just four sectors most directly affected by the pandemic: used vehicles, which were up 7.3% m/m, car rentals (+12.1%), airfares (+7.0%) and, to a lesser extent, hotel room rates (+0.4%). All are areas where prices will likely calm as the economy progresses through its post-pandemic recovery.

Our take: Last week’s CPI numbers confirm that economic reopening has become the driving force behind the latest inflation surge, as base effects – comparisons of the state of the economy now to where it was in the depths of the pandemic a year ago – now play second fiddle.

While core inflation rose 3.8% on a year-over-year basis, 3- and 6-month annualized rates spiked even higher, to 8.3% and 4.4%, respectively. Core CPI’s sharp acceleration over these shorter spans of time implies that powerful drivers stemming from the economy reopening and severe supply shortages are indeed in full swing. Base effects will fade further in June’s CPI report, due July 13th, as May 2020 was the last month when core prices saw an outright decline before starting to rise again in June of last year.

It will take more time- likely into 2022 – to fully separate the transitory forces pushing prices higher from more durable increases in inflation. For now, though, the weight of the evidence supports the Fed’s transitory thesis. With fixed-income markets pricing in just one full Fed rate hike over the next 2 years, financial markets agree with us (the financial news media doesn’t though).

Improving signals from the jobs market. There were a record 9.3 million US job openings in April (8.2 million expected), which was well above the previous record of 8.3 million openings in March, according to the US Department of Labor’s Job Openings and Labor Turnover Survey. The big jump in job openings came in April, when hiring disappointed, with payrolls increasing by just 278k jobs instead of the 1M expected. Quits, which are viewed as a gauge of worker confidence that they can find other employment, rose 11% to almost 4 million. Jobless claims for the week came in at 376,000 (versus an estimate of 370,000), marking the lowest number of the pandemic era and extending a six-week decline.

BYOB: Its time to Bring Your Own Benchmark to the LIBOR Transition Party. As the June 30, 2023 transition deadline for 1-month LIBOR looms, several competing benchmarks have emerged and are vying for supremacy in the LIBOR replacement war. Other than SOFR, the Secured Overnight Financing Rate, favored by regulators (we hate it), other seemingly better suited competitors for commercial real estate, bank and life company loans are gaining traction fast.

With the creation of the Bloomberg Short Term Bank Yield Index (aka “BSBY”, say it like this: “bizz bee”) (our favorite), the ICE Bank Yield Index (aka “IBYI”), the Across-the-Curve Funding Index (aka AXI) and Ameribor, it’s highly likely that we’re going to end up with a hodgepodge of floating interest rate benchmarks to replace LIBOR rather than a single one as regulators once hoped.

Why so many floating rate benchmarks? It’s because there’s a problem with regulators anointed LIBOR replacement, SOFR. Simply put, SOFR lacks a forward-looking curve and lacks a credit component. Both are key aspects that markets feel are a must-have in any index that replaces LIBOR. We’ll review the pros and cons of each index as they evolve, but for now, just get comfortable with a future that involves several versions of LIBOR and expect these different indexes to show up in your financing and interest rate hedging discussions with lenders, borrowers and advisors.

Bitcoin or Gold? Putting prospective inflation hedges in context. Given the varying opinions on inflation, and the ways investors use to protect themselves from it, it’s probably a good idea to check in on how these methods of inflation protection have performed over time.

In theory, an investment that hedges against inflation generally rises along with the rapid growth in consumer prices. Gold, which is often billed as an effective hedge against inflation, has not always lived up to the hype. It has produced a negative return for US investors during some of the highest recent inflationary periods. According to Morningstar data, gold investors lost 10% on average from 1980 to 1984, when the annual inflation rate was about 6.5%. Similarly, gold yielded a negative 7.6% return from 1988 to 1991, a period when inflation was about 4.6%. However, investors won big from 1973 to 1979, when the annual inflation rate averaged 8.8% and gold surged 35%.

What to Watch This Week: With the current inflation rout increasingly accepted as transitory by financial markets, your attention should shift to the state of the Fed’s #1 priority: getting America back to work. With nearly 7 million unemployed, 9 million current job openings combined with two disappointing jobs reports prove that demand for labor is recovering faster than supply. As Federally enhanced unemployment benefits expire in roughly half of America’s states over the summer, weekly jobless claims data – released weekly every Thursday – will take on greater meaning through the summer in giving markets a sense of how quickly workers are returning to the labor force.

May retail sales data (Monday) should normalize from the stimulus-driven volatility over March-April, providing important clues on the strength of the recovery in the key economic sector. That said, despite this week’s reading, its signal will be clouded by the recent spike in inflation over the last couple of months and the ongoing rotation of spending into services from goods.

Elsewhere, the June Empire State and Philly Fed surveys – measures of regional manufacturing conditions – and May PPI data – a measure of the average movement in selling prices from domestic production over time – will each give markets a sense of how price pressures for consumer goods could continue to build as summer creeps in.

Finally, all eyes will be on this week’s Fed monetary policy meeting (concludes Wednesday). While no one expects the Fed to pull back on stimulus or hike rates, we’ll be watching and listening intently for any clues on the Fed’s plan for easing off the stimulus throttle. While markets believe it’s time for the Fed to start talking about a tapering plan, we doubt that any voting members of the Fed’s monetary policy committee are ready to act at this point, given the employment gap from pre-pandemic levels and America’s challenged job-creation engine.

Big Picture: When the Fed does finally “taper” stimulus early next year, it will do so by curtailing its bond buying program. The question is, since the Fed is an active buyer of several types of bonds, which will it focus on first. With housing prices now surging and lending rates not far from record lows, some see the Fed choosing to curtail its $40 billion a month of purchases of mortgage-backed securities (MBS).

This possibility is raising concerns that mortgage rates could rise as the Fed reduces its MBS purchases, and there is no longer a buyer of last resort in the market. It’s already happening to a small degree, with MBS prices falling (and yields rising), marking their worst performance since the pandemic’s early days.

A move by the Fed to taper MBS first would be a departure from their post-financial crisis playbook in 2014, which began by the Fed slowing its purchases of MBS and Treasury bonds at the same time and pace. Further evidence that the Fed could begin tapering MBS first this time around is the size of the fiscal deficit, which is funded by the US Treasury Department’s sale of Treasury bonds. By focusing on tapering MBS first, and even re-allocating its purchases of MBS toward the purchase of Treasury bonds, the Fed would be tapping the brakes on the housing market ever so slightly, while applying more aid to the financing of the massive fiscal stimulus we’re all witnessing. Time will show us how it plays out, but something to watch in the meantime. 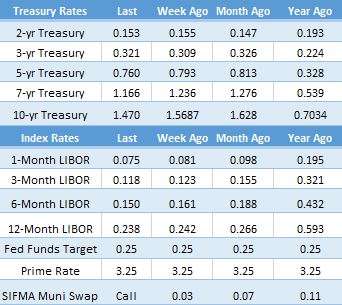 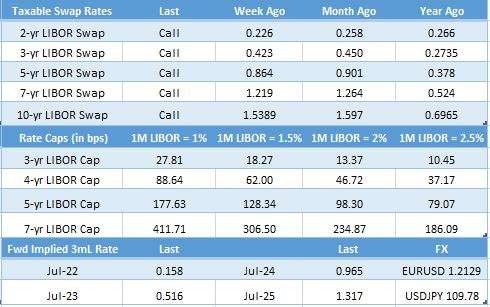 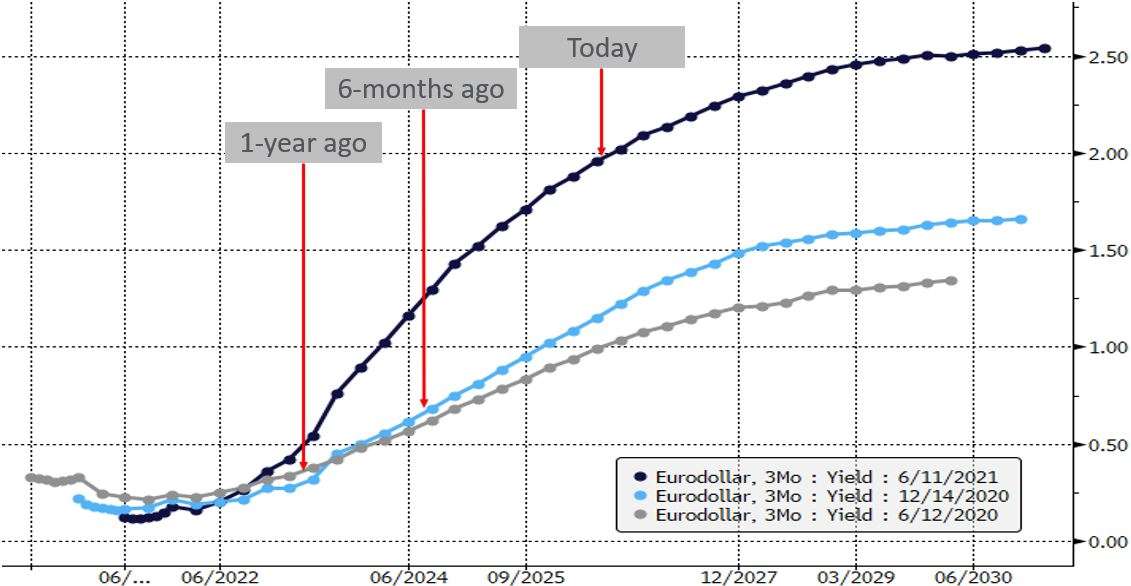 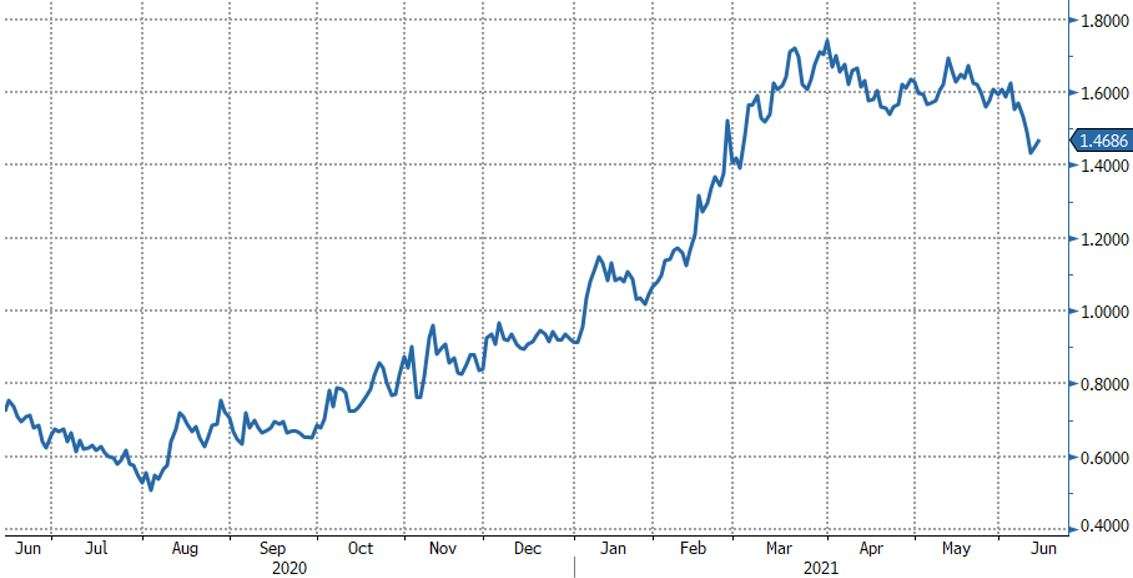