Now that the Fed seems to be on a consistent hiking path and short-term rates are steadily climbing higher, we’re increasingly asked by borrowers,”How can I lock-in long-term rates today on an expected future financing occurring in six months, one year or beyond?” Sure, long-term interest rates are attractive by historical standards right now, but the borrower’s dilemma is the debt they want to hedge doesn’t exist yet or, in a common scenario, the project is in a construction phase and the close of the eventual term financing is one or two years in the future.

What’s a Borrower to Do?

Prior to the credit crises, many borrowers typically hedged the interest rate risk on future term debt with a derivative to lock-in the Treasury or swap rate (a.k.a a forward starting swap). These derivatives obligated the borrower to pay or receive depending upon how the hedged, fixed interest rate performed versus market rates. Life was good, until the 2008 credit crises hit, which resulted in term interest rates plunging and long-term credit markets drying up. With no chance of securing term financing, and owning hedges that were now not needed, borrowers who had entered into forward starting swaps had to unwind the derivative contracts at large losses, and often with devastating financial consequences.

Is there a better way?

The need to hedge future term financing has come back vigorously, and fortunately, recent financial market conditions allow for a much better way to hedge this risk by employing an interest rate Swaption, rather than a forward starting swap.

A Swaption, for an upfront fee, buys the borrower the right, but not the obligation to enter into an interest rate swap in the future.  If the underlying debt being hedged never materializes (think of a construction loan failing to convert to a permanent one), the borrower who hedged rate risk via a Swaption, at worst, can simply walk away from the derivative. It typically plays out something like this: If interest rates are higher than the Swaption’s fixed, “strike” interest rate, the borrower is compensated for the difference. If interest rates are lower than the Swaption’s fixed rate, the borrower receives no compensation, and takes the upfront fee paid for the Swaption as a sunk cost. However, all is not lost, as the borrower is compensated in essence via a lower term rate.  Swaptions can be highly customized, in that tenor, notional, strike rate (pain threshold), and exercise date can be tailored specifically to the future financing being hedged, just like a rate cap. The Swaption is always an asset to the borrower, providing an efficient hedging solution to limit the exposure to higher long-term rates or a term loan liquidity crises.

Swaptions offer an alternative to forward starting swaps to hedge future long-term fixed rates. Its key attributes are: Flexibility. The main difference between a forward starting swap and a Swaption is that with a swap, the borrower is obligated to enter into a contract to exchange a floating rate for a fixed rate. A Swaption is simply the right, but not the obligation, to enter into a swap contract. In most cases, borrowers hedging with Swaptions don’t enter into a swap through the Swaption’s exercise; they merely “cash settle ” the Swaption, taking their gain when long-term rates are higher the the Swaption’s strike rate.

Swaptions also offer a more predictable outcome. When employing a Swaption as a hedge, there are only two possible outcomes: 1) At maturity, if term rates have risen above the Swaption’s pre-determined, fixed “strike” rate, the Swaption is cash settled to compensate the hedger.  2) If rates are lower than the Swaption’s strike at maturity, the Swaption expires unused, and the borrower locks in a rate on its term debt at the lower, more advantageous market rate. The downside? The borrower paid an upfront fee for the Swaption; if it isn’t needed, the fee is a sunk cost.

Many real estate term loans are through Life Companies, CMBS, or conduit programs rather than a bank. Generally, these credit facilities are priced using a swap index which matches the term of the loan. Swaptions provide an efficient way to protect against rising rates for future funding needs for loans indexed to swap rates.

Whether borrowing at a fixed or floating interest rate, borrowers should always have a defined, “worst case” cost of funds. This pain threshold is the starting point of any financing analysis as well as any conversation about hedging interest rate risk, as it has a huge impact on the choice of hedging vehicle and its cost.

The type of hedge used to lock-in future funding isn’t a simple decision. For various reasons, a T-lock, forward starting swap or Swaption may be the best solution based upon the yield curve, credit stipulations, borrowers view, and cost to hedge. T-locks are typically used for Life Insurance or CMBS funding, because those credit avenues do not have the capability to act as counterparty to a swap, however, a T-lock or forward starting swap may increase risk rather than mitigate it in certain situations. In evaluating a Swaption as a candidate for hedging, there are numerous variables which directly impact its cost, and therefore determine its attractiveness; amortization, notional , time to exercise, level of protection, market interest rates and volatility to name a few, not to mention the spread charged by the counterparty bank.

Curious about Swaptions and how they can work for you? Given the variables and complexities involved, we suggest utilizing an independent professional, like us, to help determine if a Swaption makes sense based on your specific goals and objectives. 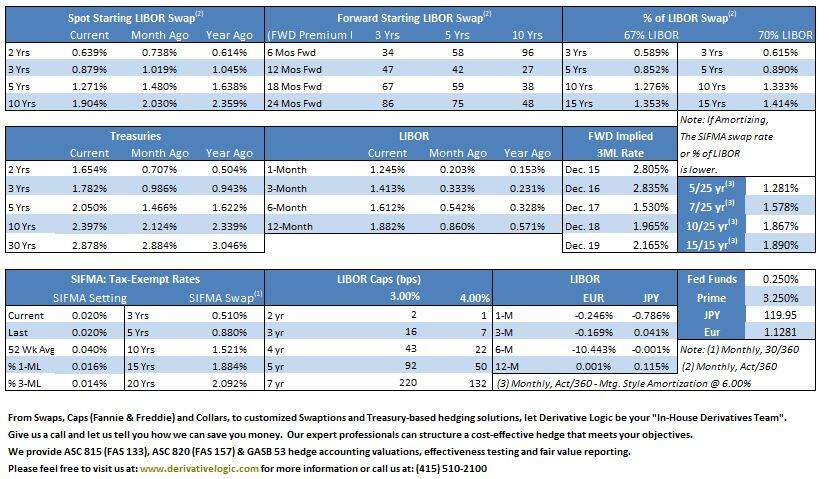 Click here for more DL Reports
The Flat Yield Curve: A Growing Disconnect Between Markets and the Fed Tax Reform and Inflation Data to Set Tone for Rates Through Year’s En...
Scroll to top