This month’s DL Report provides a short and sweet cheat-sheet concerning LIBOR’s sunset in December 2021. We’ll conduct a quick overview of what’s happening, what it means for borrowers, lenders and legal counsel, and what each should be doing now to prepare.

First off, a quick review. Since the mid-1980’s, the London Interbank Offered Rate, better known as LIBOR, has been used to price trillions of dollars’ worth of financial products; everything from securities, student loans, interest rate hedges, credit cards and mortgages. For real estate specifically, LIBOR is a key component of interest rate calculations in floating and interest- only loans as well as fixed-rate loans locked via a swap rate (e.g. CMBS). After the 2008 financial crises, a world-wide LIBOR manipulation scheme by large banks was discovered, and a litany of scandals and billion-dollar fines ensued, prompting regulators to ask: Is LIBOR serving the true purpose for which it was intended? Is it the best we can do? In short, the answer was an unequivocal NO. As such, regulatory officials have been slowly but surely planning for LIBOR to be replaced and are steadily implementing a plan for a transition to “alternative benchmarks” by the end of 2021.

While it sounds trivial, and quite boring frankly, LIBOR’s sunset will have a much bigger impact on your life than you realize. Are you a borrower? A lender? An investor? An attorney involved in lending, securities or interest rate derivatives? If so, LIBOR’s sunset will become increasingly front and center in your world in the months and years to come. 2021 sounds like a long way off doesn’t it? Once you realize the degree of complication associated with the LIBOR change, and with the window on LIBOR closing in less than three years, you’ll agree that the time to start preparing is now. The following is a cheat sheet to what you should be doing now to prepare.

1. Take inventory.
Regardless of the role you play in LIBOR -based financial transactions, the first step is to take an inventory of your financial and other arrangements that utilize LIBOR as a benchmark, then segregate those that mature beyond the December 31, 2021 deadline. This includes both existing financial contracts and those that are currently being considered.

2. Determine the impact of an alternate benchmark.
On loans: When reviewing your existing financial contracts that involve LIBOR, consider whether the adoption of a replacement to LIBOR will affect interest expense, and where there is an effect, whether to seek modifications of those agreements – including an adjustment to the credit spread – to better reflect your original intent as borrower, lender or legal representative. Further, consider whether it is necessary to include the transition away from LIBOR as a risk factor in public filings or other disclosure documents.

Ask yourself: If the publishing of LIBOR were to cease tomorrow, to what interest rate would the loan “fall back” to?

In reviewing loan agreements on a daily basis, trust us when we tell you that most loans would fall back to Prime. Big problem. Since Prime is currently 5.50% – well above LIBOR’s 2.50% – defaulting to Prime creates a financial hardship for borrowers. If borrowers suffer a financial hardship, the lenders will also suffer one – eventually. As an alternative to falling back to Prime in the event of LIBOR’s replacement, we often see loan agreements fall back to the last published LIBOR, that the loan would then use for its remaining term. Big problem again, as this fallback creates a fixed rate loan – probably far from what was envisioned by both borrower and lender. Lastly, many loan agreements we see don’t say anything at all about the possibility of LIBOR being unavailable or replaced by something else. A great situation for attorneys, not so much for lenders or borrowers. What does your loan agreement say about LIBOR being unavailable or replaced with something else? Don’t know? You should.

On interest rate hedges; rate caps and swaps: The International Swaps and Derivatives Association (aka “ISDA”) – the organization that governs the legal language of interest rate derivatives – is working to develop similar “fallback provisions” as loans for the derivatives markets to handle the change.
Note that loan agreements are negotiated between borrower and lender and don’t necessarily follow any national or global legal language standard, but contracts for interest rate derivatives do – via the ISDA. Should your legal counsel operate in a vacuum regarding the benchmark change, the risk is high for inconsistencies to develop between what your loan agreement says versus what the derivative contract says in regard to LIBOR’s sunset. The threat of this inconsistency, and what it could mean for the effectiveness of your interest rate hedge, should be high on your LIBOR sunset to-do list.

3. Choice of the alternative benchmark – who decides?
While the official replacement to LIBOR hasn’t been officially chosen yet with 100% certainty, the leading contender is something called SOFR: The Secured Overnight Financing Rate. While we won’t go into specifics on SOFR here, just know that there could be several benchmarks that could serve LIBOR’s purpose in loan agreements or for derivatives at the end of the day. As such, if the LIBOR replacement isn’t named in your contract, who decides which new, replacement benchmark to use one LIBOR disappears? The question becomes even more important if the replacement benchmark is numerically different than LIBOR (e.g LIBOR at 2.50% and SOFR at 2.40%). Further, if the numerical difference between LIBOR and its replacement is significant, does it warrant a credit spread adjustment? If so, by how much? Who decides, lender or borrower?

Don’t get caught off guard. LIBOR is being replaced, that’s a certainty, thus the issues presented above are real and must be addressed, sooner or later.
Confused? Don’t know where to start? Need more information? Get a jump on negotiations and get the edge you need by contacting us. We review loan agreements and perform pre and post LIBOR sensitivity analysis routinely to gauge the affects to the underlying cash flows. Put our expertise to work for you. 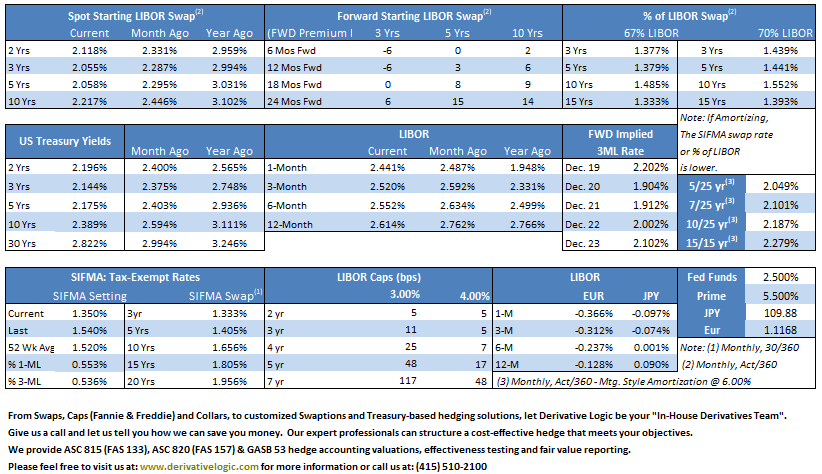