Financial newswires have been abuzz recently with the formal announcement by a UK regulatory authority last Thursday that LIBOR will be replaced by 2021. While surprising to some, regulators have sought a replacement for LIBOR for some time as past rigging scandals and an overall lack of transactional data to support its use tainted the benchmark long ago. The process for phasing it out has yet to be mapped out let alone announced, and won’t be for some time. While more than $350 trillion in outstanding securities are based off LIBOR, markets can rest assured that the transition to a new benchmark will be detailed, announced well ahead of time and there will be plenty of time for market participants to adjust. In short, don’t freak out.

Why is LIBOR being replaced? In short, due to manipulation. It’s manually set each day via a poll of eighteen select “member” banks, and is said to reflect the interest rate charged for loans between them. The problem is that several banks were found to have colluded and profited from setting LIBOR at rates that benefitted their own trading positions rather than reporting their actual lending costs. This led to the scandal we’re all too familiar with, the loss of credibility and lawsuits by regulators.

While some reforms were enacted in 2012 to make things right with LIBOR, they’ve fallen short.  Its now been proven that the many of the member banks can’t be trusted, as their self-reporting is neither accurate nor objective. The final nail in LIBOR’s coffin is the fact that the member banks no longer really borrow from each other, as the fallout from the liquidity crunch in 2008 forced them to seek financing from the capital markets instead, which continues to this day. So, if the contributing banks can’t be trusted and the interest rates they report don’t really reflect their true cost of borrowing, who needs LIBOR anyway?

When? Sometime in late 2021, as agreed by Fed-sponsored committees and regulators tasked with the job. The New York Fed plans to publish the new benchmark daily in the first half of 2018.

What’s next? In the interim, capital markets and lenders will begin to drift away from LIBOR far ahead of the 2021 deadline. The trillion-dollar questions are what will replace LIBOR, how will it reflect the true cost of borrowing and what’s the official plan for its implementation? Whatever the replacement ends up being, it must be an index on which trillions of dollars in loans and derivatives are based, should be highly liquid, representative of the market, publicly observable and very difficult to manipulate.

Here’s the skinny on a few of the candidates under consideration:

How will the change affect bank loans? The process of amending existing loan contracts is sure to be lengthy and laborious. Most loan agreements we’ve seen allow for a successor benchmark to be used, but there’s no standard language that addresses it which opens the possibility of conflicting interests, especially when it comes to cross-border loans or those that involve multiple currencies. We should have gone to law school, as the change is yet another liquidity crisis-driven bonanza for attorneys.

How will the change affect interest rate swaps and rate caps? For shorter term contracts maturing ahead of the transition, not much. However, longer-dated hedges will need to be amended in conjunction with their base loans. Relax – the timetable for lenders to affect the change is reasonable and markets will adjust.

Conclusion? This isn’t Y2K, despite what the financial media headlines imply. The coming changes will occur over the next several years. Ultimately, transparency, credibility and soundness will be improved.

While regulators seem intent on completely ditching the LIBOR construct, we’d have the following suggestions for them if they’d listen to us (pro-tip: they don’t):

Fear mongering headlines are irresponsible and create unwarranted concern. This is a market affirming development that we should be celebrating. Let’s not decry the demise of capitalism just yet. If you agree, send your thoughts to Bloomberg, Wall Street Journal, or the Economist (cc us@derivativelogic.com, of course). We’d also appreciate any thoughts or comments you wish to share directly. 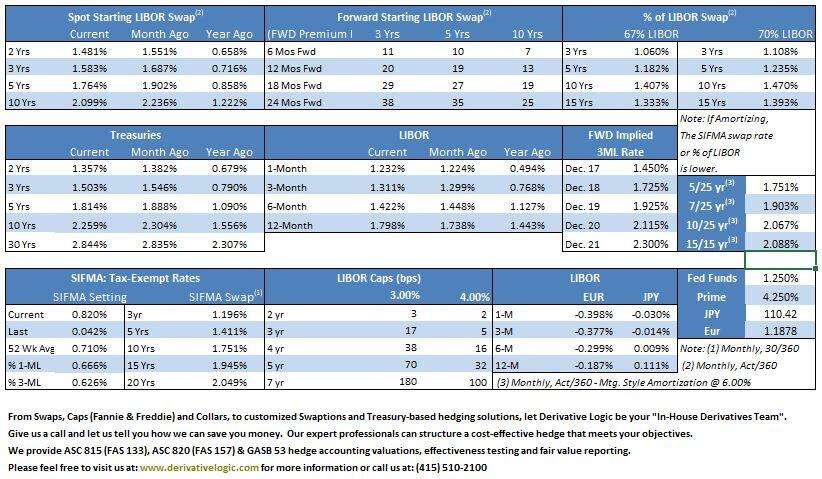 Click here for more DL Reports
The LIBOR Boogeyman is Coming The Fed & Inflation: Between a Rock and a Hard Place
We use cookies to give you the best web experience. If you continue to use this site it is deemed you consent to this site's use of cookies.OkPrivacy policy
Scroll to top