While the Fed’s 0.25% rate hike was totally anticipated, market’s and the Fed’s expectations for where interest rates are headed are miles apart. This difference of opinion is expressed in flat Treasury yield curves, where the Fed, by way of its pronouncements of future hikes, pushes short-term rates higher and markets, via their lingering doubts in the need for hikes in the first place due to minuscule wage growth and scant inflation, push long-term rates lower.

In the simplest of terms, the Treasury yield curve measures the yield difference between short and long-term debt issued by the US government. It measures the extra compensation – in basis points – that investors demand to invest in Treasuries for an extended period. A large yield spread =  a steep curve.  A small yield spread =  a flat curve. Got it? The “flatter” the yield curve, the closer short-term term yields are to long-term yields, implying that markets expect fewer Fed rate hikes in the future.

Treasury yield spreads have been ticking steadily lower for some time now across the universe of Treasury maturities; the 2 and 10-year, the 2 and 30-year, the 5 and 10-year and the 5 and-30 year curves are now the flattest they’ve been in a decade.  Its a scenario that illustrates the market’s expectation for future interest rates is in stark contrast to the Fed’s pronouncement that it intends to hike three times in 2018 and twice in 2019: 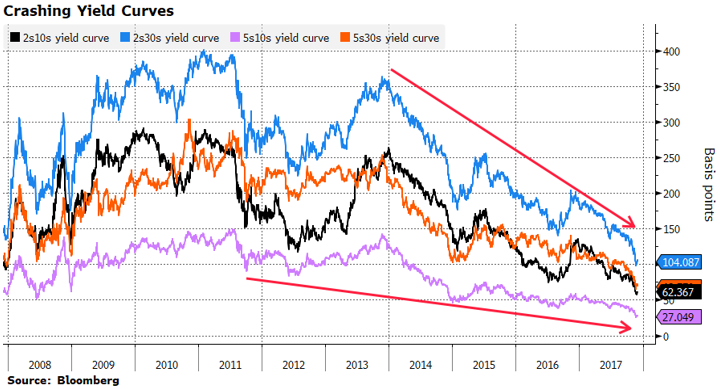 Markets and the Fed disagreeing on the future direction of interest rates isn’t anything new. What’s different this time is the great and growing divergence of opinion, the resulting degree to which yield curves have flattened and what flattening curves imply for the future. 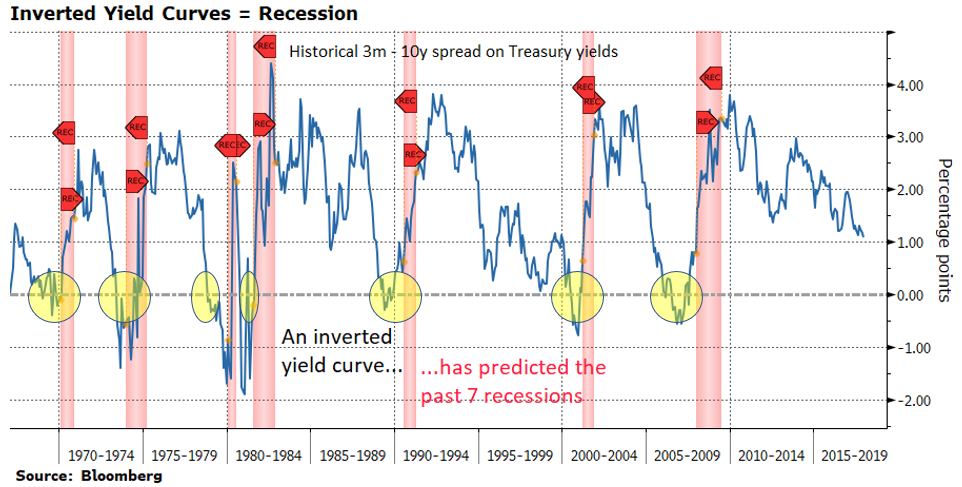 While we have a ways to go yet before yield curves invert, there isn’t any event or piece of data on the horizon that would turn the situation around.

Most of the supposed big brains on Wall Street are feverishly predicting that yield curves will get even flatter next year and possibly invert as early as mid-2018, as the Fed sticks to its “three hikes in 2018” forecast and inflation remains muted. That being said, we seriously doubt that the Fed will hike the economy into recession oblivion, but will scale back their forecasted path of rate hikes if inflation doesn’t show up as expected, thus any inversion of yield curves will be temporary if it occurs at all.

The trillion dollar question: Does the yield curve remain the reliable recession indicator it once was after years of highly unusual and large central bank monetary stimulus? According to Fed Chair Yellen, when asked about it this week, “correlation is not causation.”

So who’s correct, markets or the Fed? One of the two is wrong, and the growing divide between markets and the Fed will have to be reconciled one way or the other soon. How economic, political and monetary events evolve next year will coalesce to reconcile the situation one way or the other.

Looking to Next Year

With this week’s 0.25% rate hike now a done deal, the Fed followed through on its plan to tighten three times in 2017. It’s the first time that’s happened in years. Via the rate hike and official post-meeting statement, the Fed continued to seek a delicate balance between responding to positive news on growth and unemployment that encouraged gradual tightening, while signaling caution due to persistently weak inflation readings that have historically tripped up Fed officials.

Our take-aways for the Fed’s actions in 2018: 1) Expect a maximum of three rate hikes, 2)The FOMC isn’t a united front with now two dissenters (previously just one) opting against the most recent hike, indicating that future hikes aren’t a slam dunk, 3) Tax Reform and how it will impact the economy and the Fed’s hiking path remain a big unknown and could cause the Fed to alter its path of hikes, and 4) Incoming Fed Chair Jerome Powell represents continuity of the Fed’s mantra of slow and gradual rate hikes.

In short, the great divide between the Fed and markets, and resultant flat yield curves look to persist well into 2018. The two opposing forces – markets and the Fed – will likely strike a balance over the next 12-18 months; the Fed will scale back its proposed path of rate hikes, and markets will come closer to the realization that inflation is indeed on the horizon. Long-term rates will rise (yield curves will steepen). Regardless, with the added dissenter, the Fed will have a hard time hiking three times next year as it claims to if inflation doesn’t show up.

What are Borrowers to Do in the Meantime?

For now, borrowers are reassessing their financing plans, choosing to consider using more option-based structures for hedging floating rate risk – such as interest rate collars or swaptions – to continue to enjoy low, floating interest rates while protecting themselves against the risk of rising long-term rates. More conservative borrowers are reconsidering fixed interest rate financing over floating. Curious how you should be positioned in the current and forecasted interest rate environment? Call us. 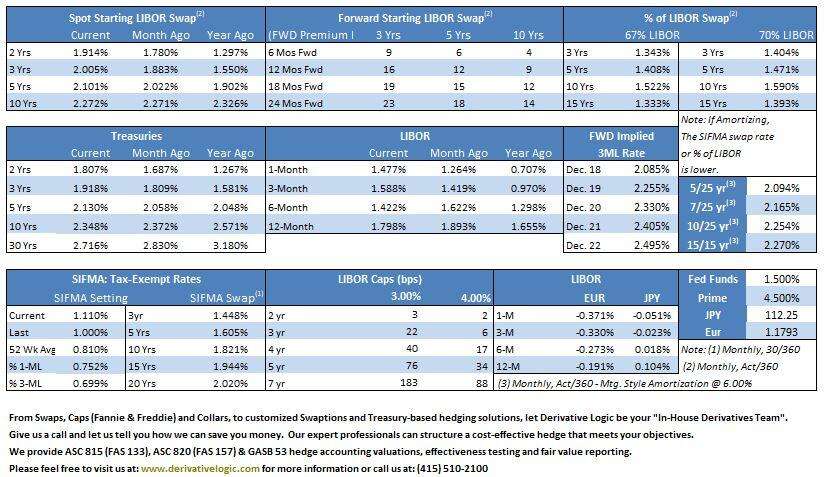 Click here for more DL Reports
Farewell Janet, Thanks for the Memories Tax Reform Cliffhanger in the Spotlight
Scroll to top