A borrower has a loan maturing in 2 years and is worried term interest rates will be much higher when the bank loan matures.  There is a swap in place, which has a negative value.  There are two important points to address. First, the loan is with a bank and, second, a pay fixed interest rate swap was executed to fix the floating rate loan.

First, let’s address the loan: Is the incumbent bank willing to amend the loan now to extend the maturity date for ten years at the same credit spread or a lower one?  The borrower may have some room to negotiate a lower spread if the loan was made during a difficult credit environment and the asset is performing well.  Bringing another bank into the mix can often help create an improved negotiating environment. In this case, another bank, sourced by a commercial mortgage broker, has offered to re-finance the loan with terms acceptable to the borrower at a lower credit spread.  With only 2 years remaining on the original loan, the economics work in the borrower’s favor due to the lower credit spread, despite the existence of the swap that has a negative value. In this case, the existing bank agreed to extend the loan for 10 years and lowered the credit spread.

Now, what about the swap?  The swap can be extended to match the maturity date of the loan or allowed to run its course.  What if the borrower wishes to accept the loan offer of the non-incumbent bank? There are several ways to deal with the swap. One way is to transfer the swap to the new bank (sounds easy, and sometimes it is, but it can be a challenge), terminate the swap, or post collateral with the initial bank and leave the swap in place through maturity. The best resolution depends on the hedging decision for the entire term of the new loan. Therefore, the next step is to structure a hedge to manage the variable interest rate risk over the new ten year loan term.

What about an Insurance loan or CMBS?  There are several ways to mitigate term rates 1, 2 or 3 + years in the future and one method is to purchase a swaption. A swaption is the right, but not the obligation to enter into a swap at a pre-determined fixed rate.  Insurance company loans or Commercial Mortgage-Backed Securities carry a fixed rate which is indexed to the 10 year Treasury or Swap rate. As with an interest rate cap, there is premium that must be paid by the borrower.  If, however, in 2 years, 10 year rates are higher than the swaption rate, the borrower is compensated upfront for the higher rate.

Case Study # 2, Plans for the asset, not the loan term, are paramount when hedging

A real estate investor took out a loan with a bank maturing in 10 years and amortizing over 25 years.  This particular investor employs a buy and hold strategy, but has plans to sell this particular asset after 5 years.  The bank is recommending a 10 year swap for 100% of the debt.  Is this a good method to mitigate interest rate risk? Probably not because, in this case, the investor has market risk if the asset is sold in 5 years and the swap has a negative market value at that time.  There are multiple hedge solutions to meet this borrower’s particular goals and our service focuses on outlining them along with their risks and benefits so our clients can make an informed hedging decision. We prefer to advise our clients at the inception of a deal so they can avoid the pitfalls that come from hedging in the absence of independent advice (i.e., hedges that are not well matched to the actual planned usage of the asset).

As an example, a few years ago, a real estate borrower came to us for advice on hedging a variable rate loan. However, the borrower wasn’t really seeking our advice; he just wanted us to negotiate a lower swap fee. We believe that finding the right hedge comes first because there are ways to lower fees by structuring a hedge and working with the bank to ensure the fee is fair for both parties.  We asked if he intended to hold the asset for 10 years or more.  He responded that he wanted to sell within 2 years.  Therefore, a swap for 10 years wasn’t an appropriate hedge.

We recommended an option strategy.  Our advice went unheeded because the borrower felt he couldn’t explain an interest rate cap to his investors.  The swap was executed for 10 years and 6 months later the asset was sold. After the swap was executed, interest rates fell and the swap was out of the money when terminated six months later in conjunction with the asset sale. The negative termination was based on the change in term rates as well as the bank swap fee.  One needs to keep in mind that the bank realizes a profit on day one when it sells a swap.  Therefore, the swap value is negative to the borrower at inception. This does not necessarily negate the value of the swap as a hedge. However, it is part of the reason to match the tenor of a hedge to the expected life of the asset as opposed to the term of the loan. The swap fee is based on the bank’s risk for 10 years tenor of the swap, not the 6 months the swap was in place.  In this case, the investor had to cut a big check to terminate the swap.  We wonder how he explained that to his investors.

Case Study #3, Hedging, if done improperly, can increase risk instead of mitigating it

There are many homeowners who pay a bit more on their monthly mortgage to reduce principal with the goal of paying the loan off before maturity.  Most home loans can be paid off without a pre-payment penalty.  The same is typically true for a bank variable rate loan.  However, that is not precisely true if a swap is in place.  In one particular case, a borrower wanted to reduce the principal periodically when possible.  One solution that mitigates floating rate risk without creating market risk by over-hedging is to estimate the accelerated principal payments and use that schedule as the first step to structuring a hedge. A swap could still be employed, but with a different (smaller) notional value than that of the loan. Other structures could also be employed. Derivatives, when structured properly, offer the flexibility to meet the hedgers’ risk tolerance. In our experience, it’s not a drop in interest rates (we call that opportunity cost) that can cause a well-intentioned hedge to backfire, but rather when the intended hedge actually increases risk instead of mitigating it.

Last one: Case Study #4, Borrowing at a fixed rate or fixing all of one’s floating rate debt isn’t always the best strategy

What about natural hedges?  If short-term interest rates start rising, it usually means the economy is growing and prices for goods and services are also moving higher.  This can be a good thing for some borrowers in regards to their underlying business.  Does a steel manufacturer have a natural hedge in an environment where the Fed is aggressively lowering interest rates because the economy is headed towards a recession and the steel manufacturer is experiencing a drop in sales of over 25%?  It could appear so if the company had most, if not all, of their debt at floating interest rates. However, if the company thought they were being very conservative and had entered into a swap to fix a variable rate loan, the natural hedge would have been counteracted.  This is a classic example of a hedger adding risk.  We can’t tell you how many times we hear a borrower say “our firm is very conservative and that is why we are fixing all of our debt.”  The steel company is an extreme example that actually happened and it is not necessarily unique.  Unfortunately, the company didn’t hire an independent derivative advisor.  A borrower that is highly leveraged should be on the opposite side of the risk continuum.

Analyzing multiple economic scenarios and possible hedge strategies with independent experts for each is the best way to avoid common hedging pitfalls and allow your business to thrive on its merits, not by coincidence.

Our philosophy is “It’s not about pricing, but structure” and our core value is to provide objectivity “Without fear or favor” 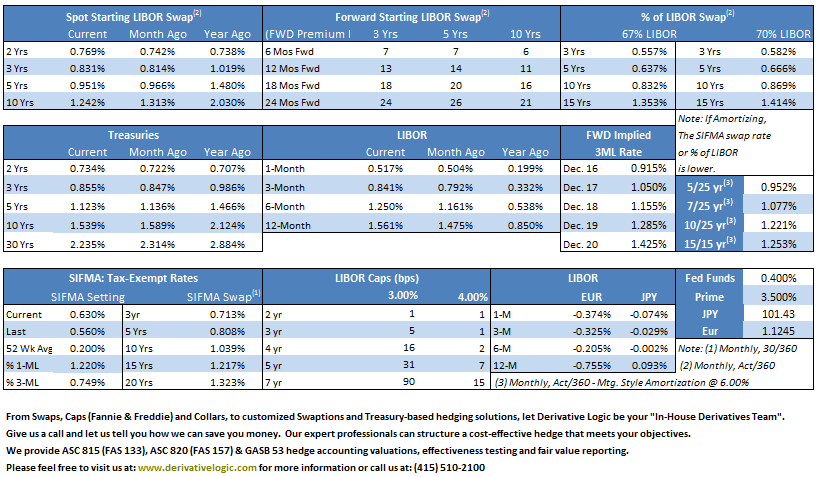