There are many ways to avoid some of the pitfalls when buying a product or service.  Reviews can be helpful, especially when taking into account the number of customer ratings.

Imagine a common scenario: While searching for a particular product on the web, a site advertises the item at a price well below the market price.  Too good to be true? Perhaps. The product had over 5k customer reviews and the majority of users rated it 5 stars.  Reading through the reviews, one could not help laughing out loud at what was posted (we will provide the link upon request):  “I opened the box and it looked great but haven’t used it yet (5 stars)”, “Arrived sooner than expected (4 stars)”, and another “The box was damaged, but the product wasn’t broken (5 stars)”.

Unfortunately, interest rate caps and swaps have no such rating system, leaving borrowers at the mercy of lenders, interest rate risk advisors and banks to offer the “best” hedge against rising interest rates. While certain aspects of a swap or rate cap seem beneficial or convenient on the surface, they often add risk or unnecessary costs.

The two case studies below review two real-world, “5-star” hedging scenarios we’ve seen recommended to borrowers recently and were deemed “the best” by the lender or interest rate risk advisor. Can you spot their flaws?

First, a little background on interest rate caps. Floating rate lenders, on loans indexed to 1-month LIBOR, commonly require their borrowers to purchase an interest rate cap for the loan amount and initial term.  The lender sets the LIBOR “strike” on the rate cap at some level above where 1-month LIBOR is trading, say 3.50%. How does the lender determine the rate cap strike you ask? Well, the rate cap strike is usually based upon the maximum the borrower could afford to pay if LIBOR rises over the loan term.

In this example, the lender is at risk if 1M LIBOR exceeds 3.50% because the borrower may not have the financial resources to make their mortgage payments if 1M LIBOR rises to and above that level.  As is usually the case with bridge lenders, once the borrower buys the rate cap, its then assigned to the lender (the borrower still owns the cap), and if 1M LIBOR exceeds 3.50% at any point over the rate cap’s life, the difference is paid to the lender to cover the interest expense on the loan.  Keep in mind, despite the assignment, the borrower still owns the rate cap in name and is the legal beneficiary of any proceeds.  The lender, by requiring the cap be assigned to them, is just making sure they ultimately receive the rate cap proceeds.  It’s just like a car loan: The car is in the buyer’s name, but the bank holds the title until the loan is paid off.

If the loan is paid off prior to maturity, the borrower’s assignment of the rate cap to the lender is released, and the borrower can sell the cap or apply the interest rate protection to another floating rate loan.  Hence, an interest rate cap is always an asset to the borrower.

Sometimes we see situations where the lender requires a rate cap to be bought and paid for by the borrower, but doesn’t require its assignment to the lender.  There are only three scenarios why this could happen: 1) The borrower has all their funds tied up with the lender and hence has a strong personal relationship with them, or  2) The lender buys rate caps themselves to manage the rate risk within their floating rate loan book and offers LIBOR-based loans with a interest rate ceiling to borrowers.  While no interest rate protection is ever free to the borrower, the note in this case would clearly state that the borrower’s interest rate will not exceed a pre-determined rate, or finally 3) The lender charges the borrower for the cost of the cap, but the rate cap remains in the lenders name, not the borrowers, even though the borrower paid for it.

Scenarios 1 & 2 make sense, but what about number three, where the borrower pays for the the cap but the lender owns it?  Not a big deal, its just a rate cap, right? Wrong.  The borrower paid for an asset, but it’s in the lender’s name.  No different than buying and paying for a car, but the owner is actually a third party. What happens to the rate cap if the loan is paid off early?  The borrower paid for the cap, but technically has no legal rights to any benefit from it, since its owned by the lender. In this real world case we witnessed just a few weeks ago, the lender originally purchased the rate cap on behalf of the borrower, put it in the lenders name, and paid for it with the borrower’s loan proceeds at closing.  Since the loan paid off early, the borrower then experienced great difficulty in monetizing what was rightfully theirs without paying thousands of dollars of unnecessary costs associated with making it right.

Squirrely set up, right? It really happened, and the bridge lenders reason for requiring the borrower to pay for the cap, but technically not own it, was that they (the lender) transact so many rate caps that they get “a volume discount” from the rate cap banks. After spending decades on the derivative trading desks of some of the world’s largest banks, believe us when we tell you, it’s a lie.

Borrower’s Mistake: Technically, the borrower had no recourse. They should have purchased the cap on their own, in their name, by using an independent derivative advisor to make sure their interests were protected in all possible scenarios. If the borrower paid for the rate cap they should own it, in name, no if’s and’s or but’s.

Case Study 2: To float or fix with a swap?

All too often we are asked to review loan term sheets that offer a credit spread “discount” if the borrower enters into a pay-fix interest rate swap to covert a floating rate loan into a fixed one.  An example:  Typically the borrower is offered two choices that look something like this:

Sure, the borrower wants a fixed rate, but should ask themselves why the discount?  It’s a good question, but the answer can be complicated.  The swap must offer some hidden benefit to the lender to explain the lower credit spread.  The answer is that the lender makes up for the 25 basis point “discount” by adding it back into the final, fixed rate the borrower achieves via the interest rate swap, and the borrower, without the help of a derivatives professional, will never know it. An even more ominous scenario:  What if the lender were to add even more than the 25 basis point “discount”to the fixed rate? Trust us when we tell you, it happens all the time.

Unless the borrower has all the parameters clearly defined, the decision to fix is not quite so clear.  Critical considerations before entering into an interest rate swap: 1) Will the asset be held for the term of the swap? 2) What happens if another bank offers a better (lower) credit spread three years from now? 3) Does the borrower receive the same discount on the entire notional if only 50% is fixed with a swap? 4)  The current yield curve is flat.  Will the lender allow for a forward starting swap which allows the borrower to float for awhile (and consequently reduce the lender’s swap profit)?

In both cases, an independent interest rate advisor can help the borrower through the analysis or negotiation with the lender.  Derivative Logic is respected by lenders as an advisory firm because we view our role as part of the team, and with the understanding that the transaction needs to be fair to both parties.

Takeaways and Considerations for Rate Caps

..and for Interest Rate Swaps

Is the swap term sheet transparent when a credit spread “discount” is given if the borrower enters into a swap? Remember, there is really no transparency, making the loan offer difficult to compare to others. We can’t stress enough how important it is to seek independent advice to help clarify what’s being offered, and more importantly, to give the borrower confidence that they have a comprehensive understanding of all the costs and risks involved.

Why hire an independent interest rate advisor? Because the lender is not independent, and does not place the borrowers interests above their own.  Always question why a lender is always recommending a particular advisor, even if it is Derivative Logic.  Do not accept the most common reason for doing so: “They know our terms and their bid package has already been pre-approved by our legal department”.  It’s utter hogwash, because any independent advisor with experience knows how to prepare a bid package to conform with any lenders requirements. 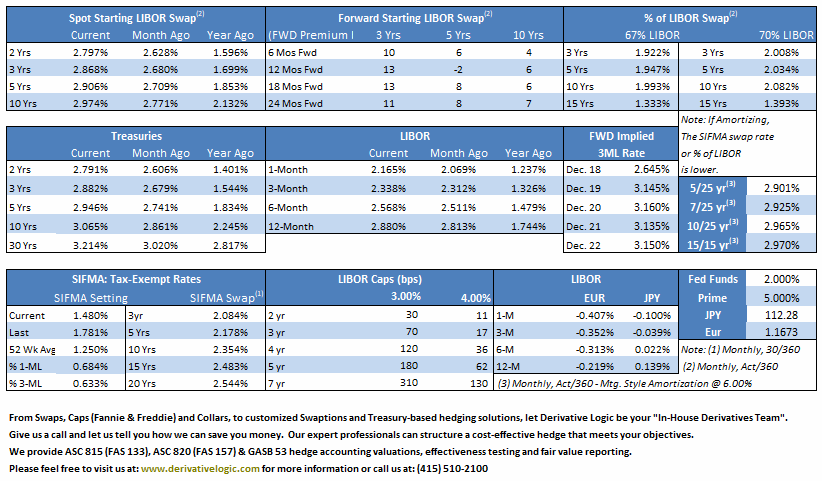 Click here for more DL Reports
Emerging Markets Turmoil Puts US Growth and Rate Trajectory Into Question All Eyes on Fed for Odds on December Hike
We use cookies to give you the best web experience. If you continue to use this site it is deemed you consent to this site's use of cookies.OkPrivacy policy
Scroll to top