The ISDA agreement –  the seemingly incomprehensible document that governs most interest rate hedges  – has just been delivered to your inbox by your friendly banker. You’re in the midst of a floating rate financing negotiation with the bank that involves entering into a interest rate swap to hedge the floating rate risk. You notice in the email that the banker asks you to sign and return the ISDA right away as it’s “industry standard” and “non-negotiable”.  As you open the attachment you chuckle, and wonder if any legal document is truly non-negotiable. You print the document, scan the pages and grab your pen. As pen meets paper you realize that you really didn’t understand anything you read, and you hesitate, thinking to yourself:  “What am I signing?”

Okay, it’s time to take a deep breath. Do you sign anything without knowing what it means and obligates you to? Of course not. Regardless of what your banker says, the ISDA isn’t “standard” and is worth your efforts to negotiate.

What is the ISDA and why should I care?

In the case of hedgers of interest rate risk, the ISDA Agreement is published by the International Swaps and Derivatives Association, and organization, among other things, that’s responsible for determining terms of a derivatives transaction (aka an interest rate swap) between two parties, typically a bank and a borrower. The ISDA was created to help demystify the derivatives market, thereby enabling further growth. The ISDA Agreement is composed of two parts: a Master Agreement and a Schedule:

The ISDA Agreement has gone through several iterations since it was initially created in 1985. Currently, banks are using either the 1992 or 2002 version. We’ll discuss how they differ from one another and why it matters later.

What, then, is it you’re signing?  In some ways it is similar to signing a loan agreement, but instead of being unilateral, the ISDA Agreement is bilateral. Consider this: an interest rate swap, as most of you know, can have a positive market value or negative market value at any given time during its life. Said another way, you and the bank will be holding opposing positive and negative positions at different points over the life of the swap.  The ISDA’s main function is to establish the road map on how to “tear up” the swap and collect if one party defaults, or some other event occurs that causes its voluntary/involuntary termination or transfer.

Here’s the main problem for borrowers faced with signing an ISDA:  In the vast majority of cases, the ISDA Schedule is heavily weighted in the bank’s favor, and out of the box, does not establish a level legal playing field between bank and borrower. Why? Banks assume that most ISDA Schedules won’t be negotiated by the borrower, and therefore, use a standard “fill-in-the-blank” type form when they compose it. That’s right. The bank’s assembly line-like documentation function almost guarantees that you’re at a legal disadvantage when entering into an interest rate swap. Even worse, most borrower’s attorneys haven’t a clue about what the ISDA is nor the business points to negotiate for the borrowers benefit.

It all adds up to a scenario where what you worked so hard to negotiate in the loan agreement isn’t reflected in the ISDA Schedule, giving you a false sense of legal security.

Now that we’ve gotten your attention, the following is a brief checklist of items to look out for when faced with signing an ISDA Agreement:

2. Know that each bank has its own unique tolerance for risk and appetite for negotiation: Some will present strong resistance to the negotiation of specific points and readily acquiesce on others. Don’t be afraid to probe in search of those business points where you can negotiate better terms.

3. Watch out for cross default thresholds: The ISDA’s cross-default provision allows the bank to terminate all the outstanding swaps covered by the ISDA if the borrower defaults on third-party debt.  Unless you negotiate a threshold amount to act as a buffer against a unnecessary termination of the swap due to your technical but not material default, your interest rate protection can evaporate unnecessarily. At the very least, the ISDA’s cross default thresholds should mirror that of the underlying loan agreement.

The ISDA’s Non-Reliance Clause: Your Queue to Seek Independent Advice

We wanted to end this brief ISDA discussion by pointing out that the ISDA Schedule contains a very important “Non-Reliance” clause. It stipulates that, as a hedger of interest rate risk,  you’re acting on your own accord, that you’ve made your own independent decision, that you know what you’re doing, and that you can’t hold the bank responsible for unintended consequences. It also means that even if the bank recommends a certain hedge product to you over another (e.g. a interest rate collar versus a swap), that it has has no obligation to advise you in any professional sense (i.e., provide complete, unbiased information). As you weigh the various hedging alternatives the bank presents to you, remember that their recommendations likely don’t reflect your interests –  only theirs – something to consider as you contemplate the interest rate hedge and weigh the advice you receive.

Are you staring an ISDA Agreement in the face and wonder what it is that you’re being asked to sign? Call us. 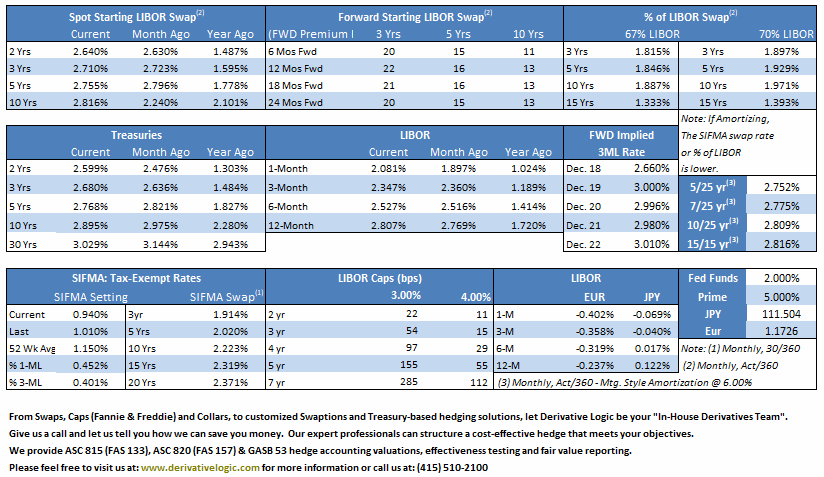