Lenders and borrowers: the “haves” and the “have-nots”. Their actions have shaped the history of the world, and how they respond to crisis and change is fascinating and informative.  Fixed rates are prudent and certain, but cash flow can be king.  When current monthly payments matter more than later ones, borrowers often elect to float their interest rates, and most of the time, that’s when LIBOR gets involved.  The London Interbank Offered Rate has a nearly 40-year history, but now, after a few missteps (and a global credit crisis), the borrowing index is slated for retirement.  The crisis has passed, and change is now upon us.  Likely at the end of 2021, LIBOR will be published for the last time, as regulatory bodies no longer compel large banks to contribute to the index.

What’s to become of us floating rate borrowers? Well, a successor to LIBOR has been named by the ARRC (Alternate Reference Rate Committee), and its name is SOFR, an abbreviation for the Secured Overnight Financing Rate.  How can we be sure that SOFR is our lasting partner?  Because the ARRC is composed of over 40 representatives from all aspects of fixed income markets: the world’s largest banks, exchanges, and clearinghouses, who report to the Treasury, Federal Reserve, SEC, FDIC, and CFTC.

It’s highly reflective of real market conditions: The first two letters of SOFR say it all.  The index represents a volume-weighted, average rate of repurchase agreements (“repos”) that are (1) Secured by Treasuries and (2) Overnight, with no term structure.  SOFR’s use of Treasuries make it secure and its overnight term allow it to reflect ever-changing market conditions far better than its 1-6 month, or 1-year LIBOR counterparts.

LIBOR is merely an average of 18-24 daily bank submissions and is not based on actual transactions, and hence became subject to manipulation by the submitting banks. SOFR avoids this design flaw, as it’s the average of hundreds of live transactions every day and is published by a very credible source: the New York Federal Reserve.

It’s very liquid: The overnight Treasury repo market, which SOFR is based on, averages more than $700 billion in daily trading volume, and is comprised of both bilateral and tri-party cleared repo trades from the DTCC and its subsidiary FICC; user-owned clearing corporations that handle the electronic settlement of US dollar financial contracts.

The ultimate reasoning behind using SOFR as a LIBOR replacement –  to use a market-based rate that can handle some volatility and not be subject to as much manipulation – would appear to be sound.

Recent developments in the SOFR market

The index has been published since the beginning of April 2018, and the start was inauspicious as the New York Fed admitted to including some incorrect trades in the reference rate over its first two weeks.  But all new ventures have growing pains, and we now have four months of comparative data for LIBOR and SOFR, seen in the chart below. 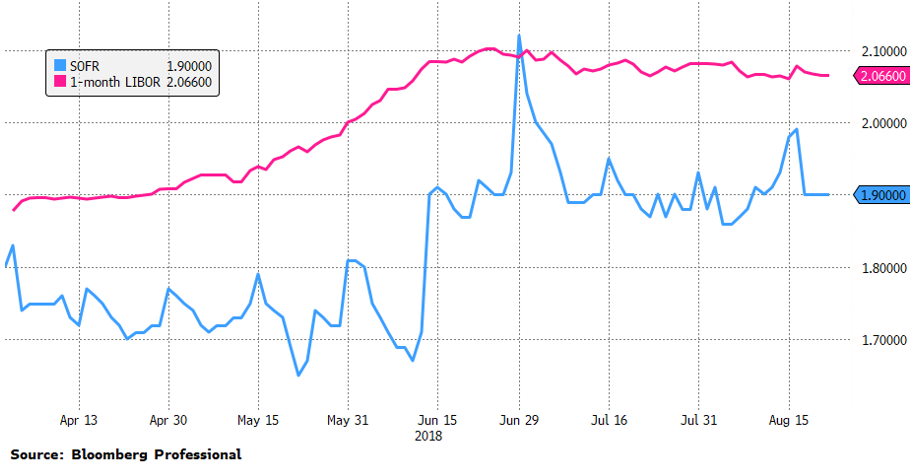 Notably, thus far SOFR is lower and a more volatile than monthly LIBOR, as the index had two rather prominent one-day spikes.  The first was the day after the FOMC raised the Fed funds target rate, a move that is also reflected by LIBOR, but in a much more gradual fashion.  The second spike was the last trading day of June, and the end of the second quarter.  While increased daily volatility might seem less desirable, if loans are resetting every day, this means only a single day of increased interest.  Most likely, monthly and quarterly products will proliferate in the SOFR market too, so that one day spikes get softened and loans reset at less frequent intervals like most LIBOR loans do presently.  The fact that SOFR has been consistently about 20 bps lower than 1-month LIBOR implies that the spread between the two is something to deal with as we transition from one loan index to the other.

We are quickly seeing new markets emerge around SOFR

3-month SOFR futures contracts have been trading since May at the Chicago Mercantile Exchange with five years of liquidity out to March of 2023.  This market has created a term structure that allows the marketplace to anticipate borrowing rates and returns for the SOFR index well into the future, allowing speculators to make bets and hedgers to cover their risks to rising rates.  The 1-month SOFR futures market has about two years’ worth of liquidity as well, and the combined open interest for the nearest maturing contracts in these two markets is over $3.3 billion.  These fledgling markets are dwarfed by Eurodollar futures and options that function off of LIBOR right now, but the writing seems to be on the wall.  The latest step in launching SOFR as LIBOR’s replacement was Fannie Mae’s introductory $6 billion issuance of 6-, 12-, and 18-month floating rate notes (FRNs) that use the simple average of SOFR as their interest rate index.  The 18-month SOFR floaters pay investors daily SOFR + 0.16% (2.06% as of August 22).

LIBOR’s Retirement: What floating rate borrowers should expect over the next year

Expect to keep hearing more about SOFR as the market grows and more and more firms adopt it in place of LIBOR.  Bank and non-bank lenders will (if they haven’t already) begin to refine replacement rate language in loan documents that start off using LIBOR as a floating rate.  Expect language to come in new contract documents, and expect amendments to existing loan facilities on a case-by-case basis.  This language could include references to SOFR or not, but it is likely to include the potential for a  “spread adjustment” to account for the daily basis point difference between LIBOR and SOFR, as banks don’t want to make less money on loans just because a new index came about that happens to be lower than LIBOR.  In addition,  the contracts will likely include ‘triggers’ – specific events that will cause a replacement reference rate (read: SOFR) to be imposed.  Swap and cap markets for SOFR-based derivatives are coming along shortly as well so borrowers can hedge their floating rate exposure just like they do today with LIBOR.  The over-the-counter (OTC) derivatives market has evolved from varying floating rate indices over time, and the SOFR conversion will be no different.  But so far, despite fits and starts, the fear of the unknown, and less than two quarters of market activity, the LIBOR to SOFR change would seem to be for the better. Informed advisory services and sound legal advice are warranted during these periods of change, to be sure.

Unsure how LIBOR’s replacement by SOFR could impact you? Call us. 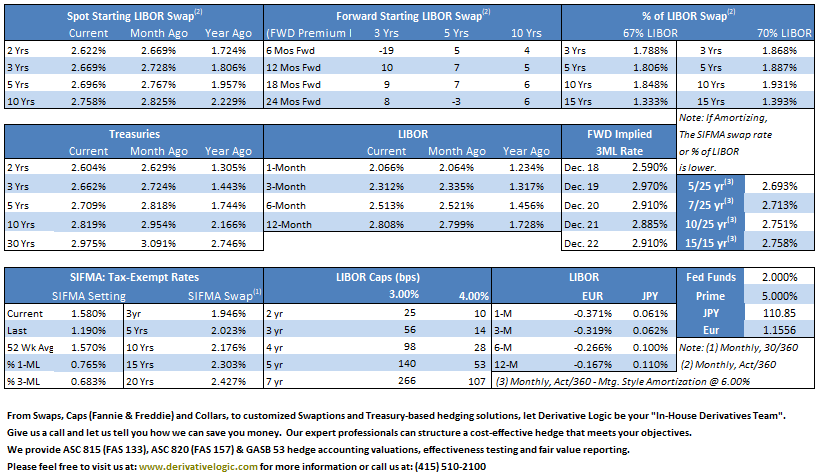