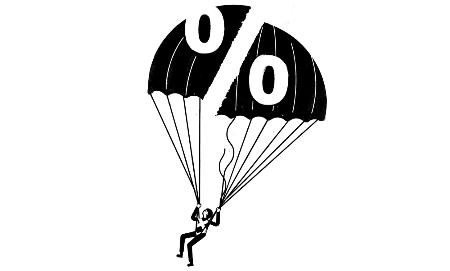 From an emergency 100 basis-point Fed funds target rate cut, to restarting quantitative easing, to enacting an alphabet soup of targeted liquidity facilities, the Federal Reserve is employing everything at its disposal to ensure the financial system remains sound. While keeping credit flowing and encouraging consumers to spend are the Fed’s top priorities, there’s one missing ingredient in the Fed’s rescue recipe: negative interest rates.

Despite their unwillingness to take the target rate negative, we’re already seeing negative rates for the first time since late in the financial crisis in the US Treasury market, on the one, two, three and six-month Treasury bills, which all dipped below 0.00% this week. The concept of negative interest rates makes heads spin. People simply can’t grasp why an investor would give someone their money only to get less back later. In reality, there are good reasons for investors to buy at least short-term debt at a negative interest rate. For one, it’s convenient: highly liquid, low risk securities such as U.S. Treasury bills are the best way for banks to manage their cash holdings and meet regulations on their levels of capital. Secondly, and most importantly in these uncertain times, some investors buy negative yielding debt because they expect rates to go even further negative in the future, which will make their investment more valuable. With this week’s move into negative territory, the US joins many European countries and Japan in the world of negative yielding government debt.

Cause #1: Supply and Demand

Bond yields are a function of supply and demand; as more and more investors seek safety in times of crises, they plow their excess cash into short-term, liquid US government bonds, like one-month and three-month Treasury bills. Many large financial institutions, funds, and investors are required to hold zero-risk assets like Treasuries in their portfolios or post them as collateral. As demand for these instruments overwhelms the supply, the price of the Treasury bill rises and the yield falls. Too much demand eventually forces yields negative. But investors don’t care; the next best alternative to owning negative yielding Treasury bills is stuffing one’s cash under the bedroom mattress, which isn’t practical. Ever tried asking your bank for a couple of million dollars in cash? It’s the same dynamic. All investors are worried about in this scenario is the return OF their capital, not the return ON their capital.

Negative yields on government bonds aren’t directly or immediately correlated with Fed rate cuts. The Fed, any central bank for that matter, can choose to adopt a negative interest rate policy – regardless of where bond yields are – for a variety of reasons.  When they do, negative interest rates usually show up as bank deposit rates (e.g. savings accounts) as banks charge savers for keeping their funds on deposit. Thus far, Fed officials have rejected the notion that they’d eventually take the Fed Funds policy rate below zero, but other central banks did after the last crisis. Let’s look at why they did it and how it has worked out for them.

Japan’s central bank, the Bank of Japan, adopted a negative interest rate policy in January 2016 to limit the damage to its export sector. As we all know, Japan exports many products to the world (e.g. cars, electronics), and its exporting activity is a core piece of the Japanese economy. Japanese exports can become imperiled when its currency, the Japanese yen, becomes overly strong versus other currencies like the US Dollar and Euro. When the Yen strengthens, it makes Japanese products more expensive in export markets when compared to their European or US competition. It’s a situation Japan goes to great lengths to avoid.

Mechanically, the Bank of Japan instituted negative interest rates by charging commercial banks a fee of 0.1% on a portion of their reserves. You can think of commercial banks in this case as depositors, just like someone with a savings account. Japanese commercial banks were required to pay interest for parking excess reserves with the central bank, penalizing the commercial banks for holding on to cash in hopes of prompting them to boost lending to businesses and consumers. As expected, these commercial banks passed on this charge on deposits to their business and individual customers by applying a negative rate on their deposit accounts. The move was intended to discourage Japanese businesses and consumers from holding cash on deposit and encourage them to spend. Secondarily, by encouraging spending, the Bank of Japan hoped to lift consumer prices, which had been sliding in a downward, deflationary spiral for most of the previous 20 years. Further, falling consumer prices had kept a lid on corporate revenues, keeping companies from raising wages or spending on new capex projects. It’s a vicious circle that the Bank of Japan hoped to change for good.

The Bank of Japan went even further by embarking on a buying spree never seen before in central banking in an effort to keep demand for short-term, liquid investments high and their yields ultra-low or negative. The bank embarked on purchases of up to 80 trillion-yen ($735 billion) worth of Japanese government bonds every year. The practice continues to this day, with the Bank of Japan now adding billions of Japanese exchange-traded funds and real estate investment trusts to its balance sheet, intending to vacuum up the excess liquidity in markets in hopes of driving prices higher and eventually spur investment and risk taking.

Did it work? The tactics have failed, mostly. Partly due to 2008’s financial crisis, and the ultra-low interest rates globally that followed, money was already cheap in Japan, and negative rates made it even cheaper. However, cheap money didn’t consistently boost consumer prices nor spark an increase in bank lending as intended. The sad state of Japan’s economy didn’t incent Japanese businesses to borrow; there simply weren’t enough profitable uses for funding, regardless of low interest rates. Japanese consumers didn’t take the bait either, choosing to continue saving, pulling the rug out from under any hopes of rising prices. This raised an interesting conundrum for Japanese corporate borrowers: If corporate revenues shrink because of falling prices, companies found that even the most generous, low interest rate loan became harder to repay. At the end of the day, corporate borrowing floundered, undermining the effectiveness of Japan’s negative interest rate policy.

Additionally, the Bank of Japan’s buying spree has ballooned its balance sheet to a point nearly equal in size to Japan’s entire economy! The Bank of Japan now owns about 45% of all Japanese government bonds and has been a willing financier of the Japanese government’s deficit spending, allowing the Japanese government to function amid a large and growing deficit (spending far more than it receives in taxes). The Bank of Japan is also a top-10 shareholder in nearly 50% of all Japanese public companies. It’s a shaky structure to say the least. Think of the Fed owning 45% of all US Treasury bonds and being a major shareholder of half of all US publicly traded companies. Crazy, right? That’s Japan’s reality.

Conclusion: Japan’s “liquidity trap” of ultra-low to negative rates, static or falling consumer prices and a dearth of corporate borrowing and capex largely continues to this day. In summary, the Bank of Japan’s negative interest rate policy hasn’t worked as intended, not even close. Japanese investors facing near-zero returns now park their money in Japanese bank accounts or investments outside of the country where, in practical terms, it is taken out of the domestic economy completely.

The European Central Bank introduced negative rates in June 2014, lowering its deposit rate for commercial banks to minus 0.1% in a broad effort, like Japan, to stimulate its economy. The outcome has yielded similar results, with Europe’s gross domestic product wallowing at a 1.2% seasonally adjusted annual rate, compared to the US’s 2.3%. Consumer spending flagged and business investment was, and remains, weak. The Swiss, Danish, and Swedish central banks all have official policy rates at 0.00% or below.

The main impetus behind Europe’s experiment with negative rates was simple: While positive interest rates represent the reward investors earn by risking their money by lending, negative rates punish banks that are playing it safe by hoarding cash. Like Japan, the goal was to ward off the threat of deflation, or a spiral of falling prices that could have deepened economic distress. While negative interest rates drove down what banks earned on money they lent, they still by and large had to pay depositors for their deposits. The resulting squeeze on profits left many European banks complaining that the European Central Bank (ECB) was making it harder for them to lend, not easier. Like Japan, the experiment hasn’t worked;  European growth is nascent, and the economic pressures emanating from the COVID-19 pandemic are suddenly making it dramatically worse.

Europe’s and Japan’s negative rate experiments proved what many economists already understood: Inflation is easy to tackle. Simply raise the cost to borrow money.  Deflation, on the other hand, is a central bank’s “Boogey Man” being a much more difficult problem to solve with dire consequences if it goes wrong.

Lenders make money by earning the difference between their cost of funds, e.g. deposit rates or LIBOR, and the interest rate at which they lend. As interest rates approach zero, or go negative, lenders net interest margins get squeezed and they find it difficult to justify the cost of underwriting and servicing loans. The result? They either widen their margins (widen credit spreads) or scale back their lending altogether, at least to less than credit-worthy borrowers. At the end of the day, today’s ultra-low interest rates mean that financing opportunities for high loan-to-value borrowers are either expensive or a complete mirage. How could a negative Fed target rate (fed funds) impact other interest rates and common rate hedging instruments? Let’s take a look.

Could negative rates really happen in the US?

Yes, but its unlikely. Fed Chair Powell threw cold water on the notion that the Fed could cut rates below zero recently, saying that America’s central bank would lean on other tools, like repo market intervention and providing support for credit markets instead. Thankfully, it seems the Fed is taking every measure possible to keep the US out of negative interest rate territory for as long as possible, but it could still happen. Even during the Great Depression, US short-term rates were not negative, and during the height of the global financial crisis, some U.S. Treasury yields fell below zero only briefly when 1-month and 3-month Treasury bill yields went negative between early and mid-December of 2008 and briefly again in 2015-16. Remember, 1-month LIBOR fell to a 4-year low of 0.61% recently. Right now, Europe’s equivalent to 1-month LIBOR is -0.46%. Japan’s is -0.15%.

As the Fed ponders its next move, one has to wonder whether the answer to every economic crises is more cheap debt. Or whether strings should be attached to the new debt that incentivize real investment in the underlying, real economy, as opposed to funding more stock buybacks. Just a thought.

What’s a borrower to do? Here’s a cheat sheet on how to prepare for negative rates: 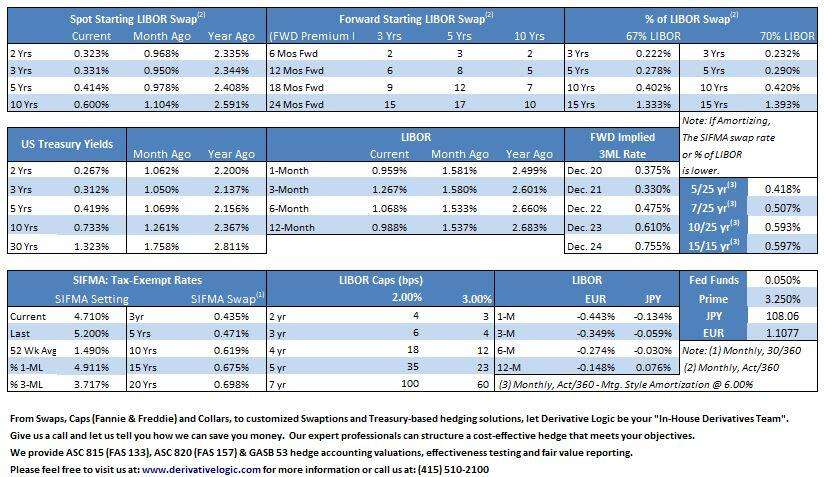