We’re all bombarded with news of the imposition of negative interest rates in Japan and in Europe, how it’s setting a historical precedence, why its happening and wonder if it’s possible in the US. While there’s a great deal of fear and misunderstanding around the idea that our beloved Federal Reserve could adopt a negative interest rate policy (NIRP), we thought our readers would appreciate an explanation of why it’s happening, the current and potential outcomes as well as the unintended consequences negative rates bring to the table.

What’s A Negative Interest Rate and Why Does it Exist?

When interest rates are high, people borrow less and save more. When they’re low, savings go down and borrowing increases. Imagine a scenario where a bank charges its customers for keeping money on deposit, rather than paying them, in hopes of motivating the depositors to spend their hard earned cash rather than keeping it in a costly account. This “spending” is what economists call the “velocity of money”: the frequency in which a given unit of currency is used to purchase domestically produced goods and services in an economy. The higher the velocity of money, the higher the economic growth the theory holds. It’s the velocity of money that Central Banks hope to increase by imposing NIRP on depositors, savers, investors and businesses.

Sounds like a viable concept when a Central Bank has tried everything in its tool box to try and stimulate economic activity with little result, eh? Several of the world’s largest Central Banks think so too, so much so that over 25% of global GDP is now being produced within countries that have adopted a NIRP, specifically Sweden, Denmark, Switzerland and Japan while over $7 trillion in government bonds worldwide now offer yields below zero. Yields on German and Japanese sovereign debt have traded negative out to 7 years this year and Swiss government debt has traded negative out to 15 years. It’s a last resort choice by Central Banks, often seen as an act of desperation after traditional monetary policy has proven ineffective at spurring growth. It’s an unusual choice to say the least, and one that could have unknown, unintended consequences. If it works however, it could begin a new era in Central Bank policy making.

Denmark has had its official interest rates below zero longer than anywhere else, implementing a NIRP in 2012. Ever since then, private businesses are saving more, private investment is down, prices have stagnated, and the country is locked into what some are calling a “low-growth crises” as investors feel caught up in economic turmoil with no predictable outcome.

Specifically, NIRP has hit Danish investors – specifically pension fund and investment managers – particularly hard as the idea of cheap money fueling increased investment goes out the window when rates turn negative. In Denmark’s case, the conclusion has been that savers and investors delay spending in an effort to protect future purchasing power due to a lack of transparency in future risks and returns.  Since invoking a NIRP, the Danish government has slashed its GDP forecast for this year to 1.1 percent, from 1.9 percent previously, while inflation data has shows prices have completely stagnated.

Never before have so many Central Banks simultaneously ventured into NIRP territory. That’s leading some to predict that NIRP could be an important policy tool in future crises as the final verdict of its usefulness is yet to be determined.

For the overall economy: NIRP harms the banking sector and reduces its appetite for lending. Banks make money by charging more on loans than they pay out on deposits. This spread, called Net Interest Margin (NIM), would be compressed in a NIRP environment as interest rates on loans tick lower and lower and banks resist charging its depositors for fear they’ll withdraw their funds for cash. A tighter and tighter NIM reduces a banks appetite to lend, hobbling economic growth.

For individual savers and investors: Negative rates incent individuals to save more, not less, due to the elimination of any interest based return on assets. Savers attempt to build up as much principal as possible before retirement due to a lack of clarity of when NIRP will end, and hoard even more income to compensate themselves for the additional costs imposed upon them via a NIRP.

For businesses: NIRP deals a severe blow to businesses confidence in the status quo via its promotion of spend vs. save, and the perception that quantitative easing (QE) has run its course and central planners have run out of options and invoked NIRP out of desperation.

Is NIRP Possible in the US?

During her March 2016 testimony to Congress, Fed Chair Yellen stated that the Fed had investigated the possibility of negative interest rates but discounted its probability as she didn’t “expect the FOMC is going to be soon in the situation where it’s necessary to cut rates.” The real world results, thus far, of NIRP are mixed, and some of the largest concerns haven’t materialized, likely giving the Fed some reassurance.

Fixed income markets are currently pricing a 7% probability of NIRP in the US over the next twelve months. With Q1 GDP at .5%, some say there is a possibility that the odds could jump if America’s jobs engine sputters and unemployment claims spike consistently.  In our view, we seriously doubt we’ll see negative rates here in the US anytime soon. If we do, we’ll have much bigger things to worry about, like which mattress we should stash our cash under. As we’ve said previously, we expect the Fed to hike rates again in June or July as long as the unemployment rate remains near 5% or lower, monthly job creation stays above 150K, and inflation continues its slow but steady climb. 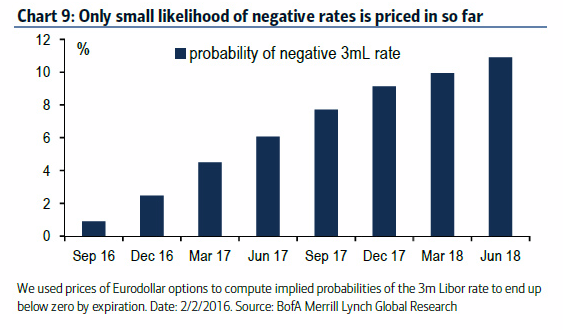 How the Threat of Negative Rates Affects you Today

Why we doubt we’ll ever see a NIRP from the Fed, we do regularly see Commercial Banks mandating interest rate floors in their loans in a proactive effort – rather than reactive as in times past –   to protect themselves should NIRP come to pass. We even go so far as to recommend to our lending clients that they consider interest rate floors for the same reason.

NIRP in other countries is helping to keep bond yields low as global investors pile into US debt, bidding up its price and driving its yield lower, in their search for positive returns outside their home country where yields are zero or close to it. Businesses suffering from NIRP may also seek to pre-pay credit cards, accounts payable or tax bills to reduce the cash they have on deposit at a negative rate.

Click here for more DL Reports
No Man’s Land: Will the Fed Hike in June? Fed Derailed by Jobs Data?
Scroll to top