In our conversations over the years with borrowers of all shapes and sizes, in a myriad of industries, we’ve seen time and time again that all borrowers basically share the same basic goal: to take advantage of low interest rates now while protecting themselves if interest rates rise in the future.

Some borrowers opt for the easy method of avoiding interest rate risk by borrowing at a variable rate indexed to 1M LIBOR and then fixing the rate on the entire loan for the full term with an interest rate swap, a strategy also known as “Fix it and Forget it”. Sometimes doing so makes the most sense given the borrowers plans for the underlying asset, or because of a view on the future direction of interest rates. Other times, it can make more sense to hedge only a portion of the debt, fix the rate for less than the full term or not hedge at all. Each borrower’s situation is unique.

Believe it or not, swaps aren’t the only way to mitigate interest rate risk.  In the following, we’ll highlight other viable methods of doing so, which, while establishing a firm level above which a borrowers rate will never rise, also allow the borrower to participate in the current low rate environment.

A borrower’s view into the best method of hedging interest rate risk is often murky. Much of the opaqueness hinges on what interest rates are expected to do in the future. Under most circumstances, the markets are fairly accurate at forecasting the direction of interest rates for the next 18 months or so.  Beyond that, it’s an educated guess and more art than science.  Ask any economist or market guru where they expect the 10 year Treasury note to yield at the end of 2021.  You will quickly realize that no one really knows.

For the past decade or so, interest rate hedging structures were limited to swaps, forward starting swaps, rate caps, step-up rate caps, and corridors.  Routinely, we see situations where it makes the most sense for a borrower to buy a short-term, “disaster” rate cap, with the idea that the rate cap will be extended for a year or two prior to loan maturity. Why not keep it simple and buy a single rate cap for the entire loan term? Financial markets are overcharging for the great uncertainties facing the global economy and markets at present. We call this the “Fear Premium”.

To explain, let’s look at a $50 million, 3-year loan, where the lender is requiring that the borrower purchase a rate cap with a 2.50% strike on 1-month LIBOR:

The 3-year rate cap is FOUR TIMES the cost of the 2-year, even when markets don’t expect 1-month LIBOR to get anywhere near the 2.50% rate cap strike in the next three years.  Obviously, the market for rate caps isn’t worried about LIBOR exceeding 2.50%, but breaching 5.00%

So why is the 3-year rate cap so much more expensive? Fear premium.

Rate cap prices are driven mainly by two factors, 1) Rate expectations (swap rates), and 2) volatility (uncertainty) of rates. With the 3-year swap rate near 1.60%, it isn’t the main driver of the ridiculously high 3-year cap cost, thus it must be uncertainty. Lets take a quick look at what could move rates in the near-term:

1) BREXIT: Now a certainty, the slow grind of extracting Britain from the EU will dog the markets for the next two years.

– What are the implications for Europe, England and the U.S.? No one really knows but they could be huge.

– Based upon the initial negotiations, it looks like it will get messy.

2) An increasing likelihood Trump’s reform agenda will be significantly delayed or even derailed. Ongoing political fireworks will breed market volatility.

3) For now, the Fed is proceeding with rate hikes amid an uncertain relationship between intensifying labor scarcity, mounting wage pressures and accelerating growth. When will their confidence end?

So what’s a floating rate borrower to do?

Interest Rate Collars are looking very good right now, but the opportunity to hedge with a collar may be short-lived.  The yield curve could steepen again, the US economy could take an unexpected turn or geo-political tensions could boil over.  If any of these situations arises, the collar will likely lose its appeal.

How does a Collar Work?

First off, Interest Rate Collars haven’t made sense consistently for nearly a decade. The current low rate environment and flat yield curve have changed that. Here’s an example of how they work:

Opportunity: LIBOR trades between 1.00% and 2.50% over the next five years

As stated before, a collar establishes a defined RANGE (floor and cap) of interest rates the hedger is subjected to as opposed to a single, fixed swap rate.

Imagine buying a 1.70% LIBOR cap and selling a 1.70% floor. What have you got? A 1.70% swap. A collar is simply a swap with a range (the floor and cap), customized by the hedger to meet their unique goals and objectives.

99% of what we do is educate. If there’s an interest rate exposure you’re struggling with, give us a call. 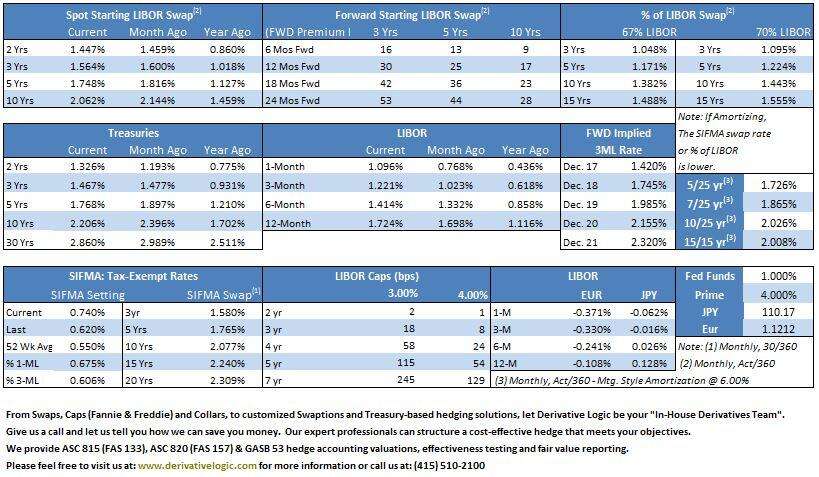 Click here for more DL Reports
Doubt Springs Anew Diminishing Expectations
We use cookies to give you the best web experience. If you continue to use this site it is deemed you consent to this site's use of cookies.OkPrivacy policy
Scroll to top