Freaked out by the recent announcement of plans to end the use of the LIBOR index? Given that nearly every large floating-rate loan from a bank, conduit or life company is linked to LIBOR, the announcement by the UK Financial Conduct Authority over the summer has left lenders and borrowers in a quandary to not only identify LIBOR’s replacement, but how to handle ongoing loans as well as nail down the future floating rate verbiage in loan documents.

The pervasive nature of LIBOR in its use in interest rate swaps and rate caps – among other derivatives – makes its replacement complicated. While the planned phase out of LIBOR raises a multitude of questions, the regulatory powers that be are helping make markets more comfortable with the change. The governing financial bodies which ultimately drive the decision – such as the International Swaps and Derivatives Association (ISDA) and UK Financial Conduct Authority (FCA) – haven’t issued any formal directives or plans. The entity that currently administers the LIBOR index, Intercontinental Exchange (ICE), has stated that it intends to continue publishing LIBOR, but has also failed to publicize any specific, quantifiable plan for the transition to the LIBOR replacement.

In the following paragraphs, we’ll examine different aspects of LIBOR’s replacement as they relate to floating rate borrowers and lenders:

What is LIBOR’s likely replacement and why is it better? The problem with LIBOR is that it doesn’t represent the cost of borrowing between banks as originally intended. It’s manually set each day via a poll of eighteen select “member” banks, and is said to reflect the interest rate charged for loans between them. The problem is that several member banks were found to have colluded and profited from setting LIBOR at levels that benefited their own trading positions rather than reporting their actual lending costs. This led to the scandal we’re all familiar with, the loss of credibility and ensuing lawsuits by regulators.

The Alternative Reference Rates Committee (“ARRC”), a finance industry body set up by the US government, including the Fed, that is orchestrating the transition in the US, has suggested that a market based Treasury repurchase agreement a.k.a ““Broad Treasuries Repo Financing Rate” be used instead. Its essentially a reference of the cost of overnight loans that use U.S. government debt as collateral, and would be based on live, actual transactions and published by the Federal Reserve Bank of New York in coordination with the Office of Financial Research in an attempt to reduce the risk of manipulation.

Paced Transition Strategy vs. Big Bang: The ARRC plans to refine its proposed transition plan and publish a final report before the end of the year. While markets wait, two different ideas for the pace and timing of the transition are being bounced around; a slow, steady “paced” transition and a “big bang” scenario. In the paced transition, new contracts would slowly begin to transition towards the new index to build volumes, before allowing old contacts that already reference LIBOR to be phased out as they mature/expire, versus the less desirable “big bang” scenario where every entity using LIBOR meets a hard deadline for implementing the new index.

How will the change affect bank loans? The process of amending existing loan contracts is sure to be lengthy and laborious. Most loan agreements we’ve seen allow for a successor benchmark to be used, but there’s no standard language that addresses it, which opens the possibility of conflicting interests, especially when it comes to cross-border loans or loans that involve multiple currencies. We’re kicking our self for dropping out of  law school, as the change is yet another liquidity-crises driven bonanza for attorneys.

How will this affect interest rate swaps and rate caps? For shorter term contracts maturing ahead of the transition, not much. However, longer-dated hedges will need to be amended in conjunction with their base loans. Relax – the timetable for lenders to affect the change is reasonable and will markets will rationally adjust.

Conclusion? This isn’t Y2K, despite what the financial media’s headlines imply. The coming changes will occur over the next several years. Ultimately, transparency, credibility and soundness will be improved.

What to do in the meantime? Lenders making new loans and borrowers negotiating new floating rate financings that use LIBOR should structure the related terms and agreements to allow for an orderly and flexible transition to an alternate index, minimizing disruption and potential negative impacts. While the market’s eventual transition away from LIBOR is uncertain, lenders and borrowers should work together to build in the flexibility to address future changes and potential LIBOR replacements. While action on your part isn’t necessary now – LIBOR has not yet been discontinued – you should begin to put a team in place to discuss risks, options, and solutions. A key member of this team should be your favorite derivatives advisor.

To gain a sense of how financial markets are feeling about the change, observe the futures market as details emerge. At present, the futures market seems to be working just fine with LIBOR in its current form and is unconcerned with the uncertainty of what the LIBOR-replacement will be. You should be too. This is a positive move and change is warranted.

Resist the hype. We’ve seen this scenario before. People pulling cash out of ATMs, buying guns, building bomb shelters, stocking up on food, buying gold, and banks requiring customers to provide a Y2K certification. What happened in the end? Essentially nada. The transitioning of the LIBOR benchmark will play out similarly.

More detail can be had at the Federal Reserve Bank of New York’s blog site: http://libertystreeteconomics.newyorkfed.org/2017/06/introducing-the-revised-broad-treasuries-financing-rate.html 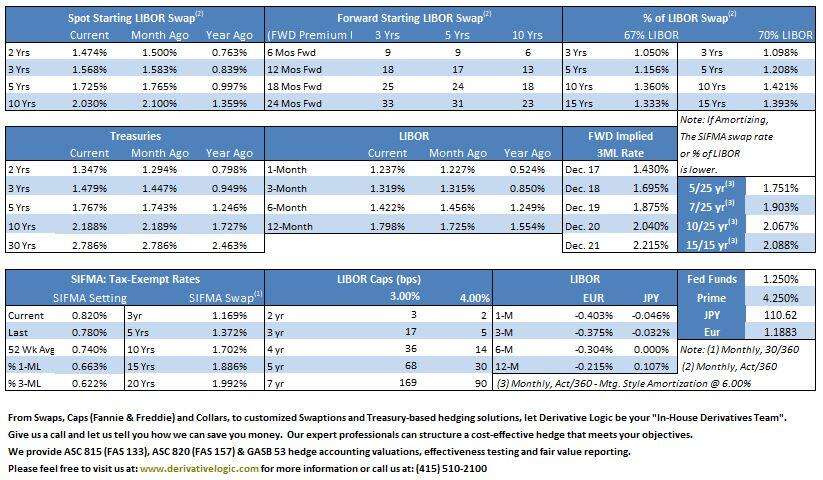