In our decades of assisting companies in their management of interest rate risk, we hear one question frequently:

“I’m conservative and only borrow at a fixed interest rate. Why should I care about hedging interest rate risk?”.

It’s a fact that floating rate debt typically represents a small percentage of a company’s debt load. However, all debt will mature eventually, and when it does, you’ll have to face the music of interest rate markets at that time. For most companies, this future refinance risk dwarfs the current risk presented by floating rate debt. In the following paragraphs, we outline the key tenets of the best practices of interest rate management, laying out a road map for borrowers to follow to come to the right decision while eliminating common myths and misconceptions along the way.

Fixed rate debt is nothing more than insurance against the volatility of floating interest rates. As a borrower, you should always know if fixed rate debt is cheaper than floating debt and vice versa. Said another way, is the net present value of all fixed interest payments less than that of floating interest payments? Unfortunately, this question can’t be answered until maturity of the floating rate loan being considered and thus the analysis can’t be made without establishing some assumptions about where interest rates are headed. While arguments on why rates will rise or fall may sound compelling, no predictions – not even ours –  are accurate beyond a few months, and are shown to be only random guesses over time.

Take-Away: A view-neutral strategy of managing interest rate movement is one that does not allow a view of where rates are headed to affect your decision on whether to borrow at a fixed or floating interest rate. So, what are borrowers to do?

Sparing dragging you through a detailed linear regression analysis of the correlation between 10-year treasury yields and whether fixed versus floating has proved to be the cheapest interest rate strategy historically, generally speaking, trust us when we say the lower the 10-year Treasury rate, the greater the probability that fixed debt will cost less than floating debt over a 10-year period.

While fairly obvious, this fact is often ignored.  In fact, most companies do the exact opposite, as they extrapolate a recent month long bond rally/fall in yields into a long-term trend and keep or increase their floating exposure. Conversely, as term rates rise, they assume it’s a temporary blip until it’s too late, panicking and fixing their interest rate near the peak. We’ve seen this error filled dynamic play out with borrowers over and over again. But we’re all smart, right? So how can this happen?

Ignore the Shape of the Yield Curve

Contemplate this scenario: You’re evaluating your financing options and are choosing between borrowing for 5 years at a fixed rate of 3.5% or at floating rate of 2.5%. Which should you choose?

Some thoughts to consider:

All three of the questions above refer to the steepness of the yield curve for answers, and are irrelevant – here’s why:

LIBOR Forward Curve: How Accurate of a Predictor? 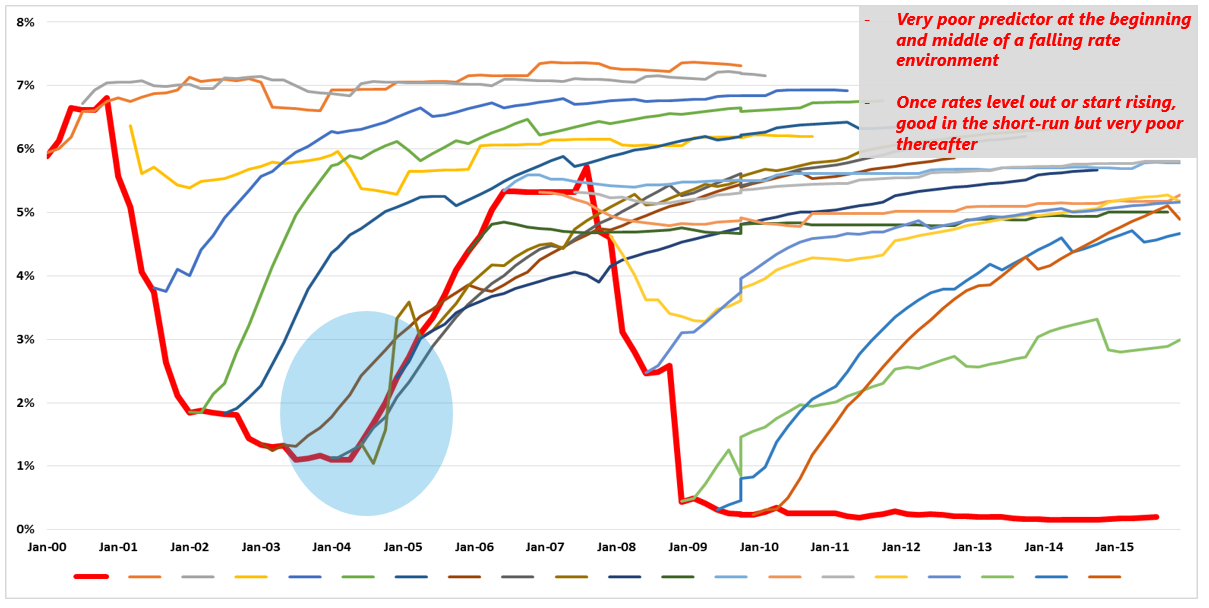 It’s a graph of LIBOR Futures curves – the multicolored lines and the only real predictor of interest rates – against where LIBOR actually traded – the bold red line – over the last 16 years. Any specific LIBOR futures curve in the graph is a snapshot of the markets best guess of the future path of LIBOR at a given point in time. As you can see, there were very few instances (other than the blue shaded area) where LIBOR actually followed the path markets had predicted.

Unfortunately, most borrowers use the LIBOR yield curve, or the Swap curve (which is derived from the LIBOR curve) as the main determinate of whether to borrow at a fixed or floating interest rate. Borrowers who ask, “How much more over LIBOR will I need to pay if I borrow fixed?” are falling victim to the flawed method of using the worst predictor of future interest rates – the LIBOR yield curve – as the driver in deciding upon fixed versus floating rate financing.

Take-away: The LIBOR yield curve – the most common method of forecasting interest rates –  is a terrible predictor of the future path of LIBOR; hence, its shape and positioning should be ignored when forming a strategy for managing interest rate risk.

A true interest rate strategy considers the risk of volatile interest rates not only to current cash flow, but to the future health of the organization. To their detriment, most companies only think of interest rate risk in the context of floating rate debt, which is usually only a fraction of the risk to the company, leaving the much larger risk unattended: the risk that the interest rate on future debt will be detrimentally high once a company’s current fixed rate debt matures.

Liquidity risk is the risk that funds are available for refinancing at a similar LTV or cash flow coverage. This type of risk can only be hedged with a prohibitively expensive forward loan or equity commitment.

Refinance Risk is the risk that interest rates are so high in the future that future deals will be economically unattractive.

Take-away: The majority of Refinance risk comes from interest rate risk, which can be eliminated or significantly reduced by hedging with interest rate derivatives, allowing a company to lock in favorable interest rate levels regardless of debt maturity schedules.

A long-term interest rate strategy should have two goals: 1) to create the longest stream possible of known interest expense, and 2) to drive down interest expense over time. Most of the time, these goals are mutually exclusive, but there are times when they’re not, and organizations must act strategically to take advantage while the opportunity to accomplish both goals exists.

The cost of debt is arguably the largest single expense a company faces. Driving down the cost of borrowing by even a small amount often dwarfs cost reductions from streamlining operations or, in the case of commercial real estate, the revenue enhancement from decreased vacancy.

For borrowers, it’s critical to:

In our experience, an organization’s priorities and political environment are in constant flux. It often helps significantly to involve an independent third-party to rise above the fray and develop a long-term debt management strategy based upon optimal interest rate risk management tactics. Even if an organization creates a sound rate management strategy, poor execution can be a major obstacle to the fulfillment of any plan. Most firms wouldn’t undertake any significant deal without legal expertise and execution of an interest rate strategy is no different. Avoid the pitfalls of poor execution – overpaying, costly documentation errors and/or unwinds by working with hedging professionals.

Put our decades of experience to work for you. 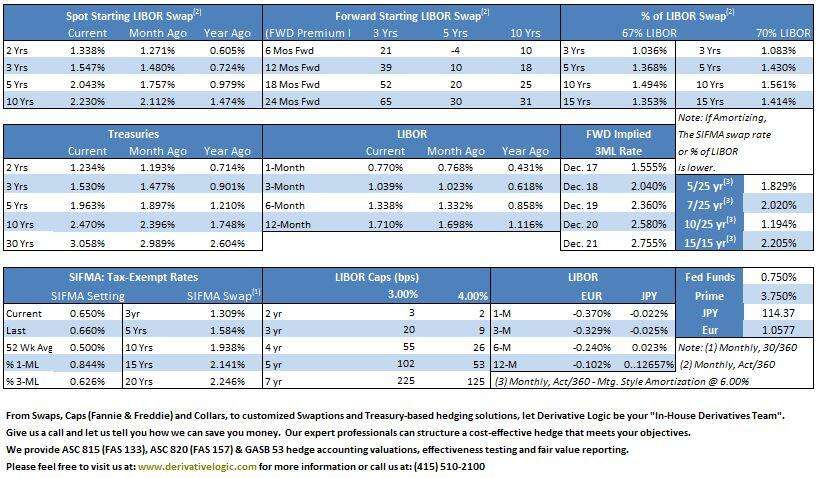 Click here for more DL Reports
Hope vs. Reality In Trump We Trust
Scroll to top