lt is likely that close to 90% of recently executed pay-fixed swap have negative market values today.  Current swap rates are, for the most part, lower than those for swaps executed I, 3, 6, or 12 months ago. In addition to movement in rates, one needs to take into account that swaps are typically initiated with a negative value due to bank swap fees. For 10 year swaps initiated around two years ago the rate could’ve been as high as 3.00%. Currently 10 year swap rates are approximately 1.30%. The difference between the original swap rate and the swap replacement rate under this scenario is 1.70%..  That means the cost to terminate a swap under current market conditions can be substantial.

With so many pay-fixed swaps having a negative Mark-to-Market (“MTM”), borrowers are having to pay a fixed rate considerably higher than current floating rates, so some serious heartburn and regret is common­place to a borrower who converted floating rate debt to fixed.

We coined the phrase “Swap Fatigue” for those borrowers who have consistently fixed floating rate debt with a swap only to see floating rates fall or stay well below fixed rates. Those who have fared well likely didn’t hedge 100% of their debt with a swap or used a combination swap/interest rate cap to hedge the variable rate exposure. However, just because a hedge didn’t work out optimally doesn’t mean borrowers should stop hedging. Instead, they could ask, “What is the best way to structure a hedge that will provide protection and maintain some flexibility?” Advice on how to structure a hedge ideally should come from an independent source, not a lender or swap provider.

Do you need a Swap? Why should one hedge if short term rates aren’t expected to move much in 2016 and moderately in 2017? Due to a number of factors, some borrowers wouldn’t benefit from hedging floating rate debt, while others would do well to consider hedging the risk of rising interest rates. We hear all the time from floating rate borrowers that fixing the rate makes no sense because the Fed is going to keep rates low in the near term. Granted this likely is true; however, the market has already taken this into account. Locking in a rate today is accepting the market’s view that short-term rates will stay low for a time with slow, measured increases.

What hedging accomplishes is protecting a borrower from rates rising faster and/or more abruptly than expected.  Who knows what the economy will look like in one, two or five years’ time? Will we continue to be in a slow recovery or is a recession around the corner?  The current recovery has lasted for 7 years and is the fourth longest since 1850.  If the recovery continues to grow past February 2017, it moves up to 3rd place.

The rate for a 10 year interest only swap is around 1.30% and the market doesn’t expect 1M LIBOR to breach 2.00% over the next 10 years.  This is the lowest rate in over 30 years.  We could’ve said the same at the beginning of 2009 and 3rd quarter 2012.  Records are meant to be broken.  We can’t assume this is the bottom; just look at how low 10 year sovereign debt yields are in Europe: United Kingdom 0.70%, France 0.152%, Germany -0.07%, and Switzerland at -0.59%. However, any number of changes in economic conditions can send rates skyward. Regardless of the direction of future interest rate movements, hedging is meant to protect against any potentially detrimental changes. A swap that matches the tenor of floating rate debt is one vehicle to hedge interest rate risk. Below, we explore some others.

Starting a swap one or two years into a loan allows a borrower to take advantage of low current short term rates while locking in protection against higher rates at some point in the future.  Swap rates encompass the implied LIBOR expectations over a given period of time.  Leaving one or multiple periods out of the calculation removes them from the fixed rate swap mathematics.  A more important benefit to starting a swap in the future is a reduction in fees.  Swap providers mark-up the swap rate and receive a fee based upon the number of basis points embedded in the swap rate. The fee is determined, and recognized on the trade date, by multiplying the Present Value of 1 basis point (“PV01”) by the number of basis points added.  For example, the PV01 on a 10 year $10mm swap starting today and maturing in 10 years is $9,516.  If the swap provider added 30 basis points to the swap, the profit is 30 x $9,516 = $285,480.  If we executed the swap to begin in 2 years and mature at the same time, the PV01 is $7,508. 30 x $7,508 = $225,240.  This amounts to a swap fee savings of $60,240.

Caps provide protection while giving the borrower more flexibility than a swap. Caps have the advantage of not tying up additional credit, as would a swap, and making a refinance easier because swaps can be costly to unwind.  Borrowers may also want to consider longer dated caps; however, the cost of a cap beyond 3 years can be quite expensive.  The reason for a higher premium after 3 years is the market is not concerned LIBOR will breach 2.00%, but is factoring in the risk that LIBOR may exceed 5.00%.  Is a cap the best way to hedge?  Seek independent advice to help you determine what hedge meets your goals and objectives.

A collar is the purchase of an interest rate cap and the sale of an interest rate floor.  The premium received for selling a floor is used to offset the cost of the cap.  A collar can be structured with no upfront costs.  Given the current interest rate environment, there has never been a better time to consider a collar to mitigate interest rate risk.  Think of a collar as a swap with a range.  If the floor is 0.50% and the cap is 1.50% the hedger will not pay interest above 1.50%, but if 1M LIBOR falls below 0.50%, the hedger is obligated to pay the difference.  Conceptually a collar is a simple hedging strategy; however, pricing a collar isn’t so easy for a variety of reasons.  There are risks to consider just as with any derivative. Again, independent advice inclusive of analysis of various hedge instruments, their structures, costs and risks will enable optimal hedging decisions.

This is the first time many of us have experienced a long term, low rate economic environment, but some may remember much higher interest rate environments. 80’s inflation, anyone? Home loans at 12.5% with negative amortization! It is scary to think about how risky those loans were, but, fortunately, a few years later many were able to refinance with a normal amortizing mortgage at rates probably thought to be the lowest of a lifetime…until rates dropped again…and again.

We don’t believe anyone can accurately predict, especially using market expectations in the forward implied LIBOR curve, where short-term or long-term interest rates will be 2-3 years from now. That is why borrowers hedge, to minimize unforeseeable risk. Just because swaps or other hedging vehicles haven’t worked optimally lately doesn’t mean one should stop hedging or thinking about new ways to manage risk. The problem – it’s often too late to hedge against risk once the market changes direction.

Having been involved in markets over numerous periods of stability interspersed with those of high volatility and uncertainty, a prevailing lesson that is shocks occur without warning. Having a plan and a disciplined approach to following it will best position a borrower, investor or any market participant to weather the storm. Remember that not hedging is just as active and consequential a decision as choosing and executing a hedge.

What if we want the swap to start two years from now? 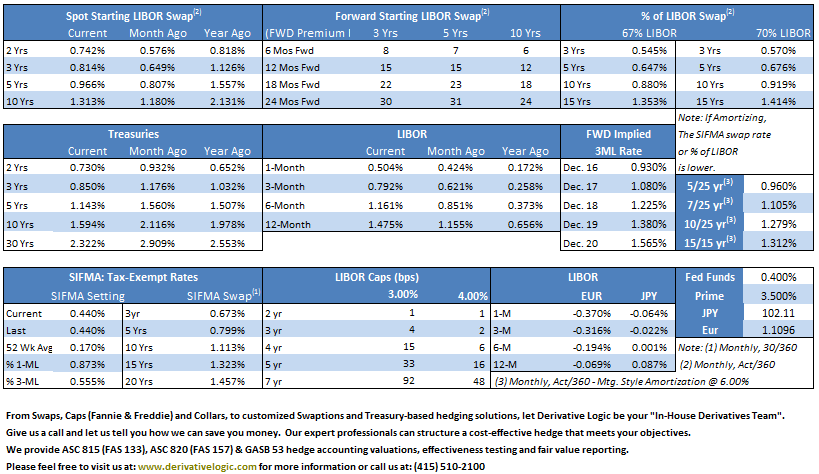