With long-term interest rates at multi-year lows and falling, we are often asked how borrowers can lock-in long-term rates today on debt maturing in one year, two years, or beyond. The borrowers’ dilemma is their permanent debt placement or refinance isn’t happening for a couple of years…is there any way to benefit from what may prove to be an irrational bond market position today that has pushed rates down so low?

Swaptions provide a hedging solution to limit exposure to higher long-term rates. A swaption is the right (but not the obligation) to realize a beneficial change of swap rates in the future. If a future swap rate (like the 10-year rate your CMBS deal will use for funding) is higher than the swaption contract rate, the borrower receives a payment to take the sting off of the higher rate. If the swap rate is lower, the borrower receives nothing, but winds up with a lower market rate on their financing. It’s pure insurance on a future swap rate – pay the premium upfront, collect a benefit as the ‘insured’ if rates move against you. The swaption buyer sets the balance amount, rate level (the strike, or pain threshold), and relevant dates. A cash-settled swaption (with premium paid up-front) is an asset – the buyer of the option receives a cash settlement if the rate is above the level of protection – there will never be a big negative exposure down the road like a swap might have.

1) A swaption is an option to enter into an interest rate swap (swap option).

2) A swaption is typically paid for when the contract is executed (just like a rate cap).

3) If cash-settled, a swaption is not a credit product (no collateral required).

4) A payer swaption affords the buyer the right to enter into a swap as a fixed rate payer and receive a floating rate.

5) A receiver swaption affords the buyer the right to enter into a swap as a fixed rate receiver and a floating rate payer.

6) The seller of a swaption receives an upfront premium in exchange for the willingness to have a potential contractual obligation in the swap.

7) The value of the swaption is based on the dollar amount, market interest rates, term of the underlying swap, time to exercise, and market volatility.

8) A swaption is either exercised or expires worthless.

9) A swaption can also be used to extend or cancel a swap. A cancelable swap is created by combining a vanilla interest rate swap with a swaption; it’s similar to issuing a callable bond. 10) An extendable swap gives the buyer the ability to extend the term of the swap at a pre-determined time and interest rate.

The recent downdraft in Treasury yields, and the faltering expectations for LIBOR, have made swaptions and other interest rate options very reasonably priced. If the anticipated troubles (recession, trade war, deflation) prove to be minimized, term rates may reverse course and rise quickly in the not-so-distant future.

Borrower has a $30 million fixed rate bank financing upcoming for some apartments. The term of the financing is 10 years with a 30-year amortization. We learn from the bank that the fixed rate will be set on October 1st at the 10-year swap rate as displayed on Reuters plus a 2% loan spread, on the effective date of the loan. So in a market where the 10-year swap rate has gone from 3.30% last November to almost 2% in early June (a 125 basis point move!), and with each additional basis point (0.01%) in the fixed rate costing the borrower nearly $24,000, there was a desire to keep such a beneficial move, if possible. Why can’t the bank let them lock in 2.06% + 2% = 4.06% now!?

The at-the-money swaption strike was 2.06% – the cost of the swaption was $360,000 (if we divide by that $24,000 basis point value, we get 15 bps = 0.15% per annum over the life of the loan). So having picked up 125 bps over the last six months as the deal was coming together, and having pro forma-ed the apartment economics using a 5.50% all-in interest rate, the borrower felt that paying the equivalent of 15 bps in rate to benefit from the recent fall in interest rates made a lot of sense.

So what happens if rates go back up as the borrower feared? Well, once the expected 10-year swap rate for 10/1/19 gets above 2.06%, the swaption starts to become more valuable. If we get to the exercise date (September 29th) and the swap rate was around 2.50%, the value of the swaption should be about $1 million. So, while their loan fixed rate will be roughly 44 bps higher (4.50% all-in), the $1 million value of the swaption nets out against that rate rise and their true cost will be lower because of the insurance they bought. Their true cost, all else equal, would be the strike rate of 2.06% + 0.15% swaption cost = 2.21% for the hedged index rate plus the 2% loan spread = 4.21%. That’s a heck of a lot better than 5.50%, and they’ve managed to recapture 29/44 = 66% of the lost gains on the 125 basis point pick-up over that four month stretch, and are still way ahead of where they were last November when the deal was initially contemplated.

And now, you ask, what happens if our current scenario comes to pass, one where rates continue to plummet after the borrower purchases the swaption? If we analogize the swaption to homeowner’s insurance – always remember, owners are always better off if the house doesn’t burn down! The borrower spent $360,000 (or 15 bps) on insuring the interest rate index at 2.06%. Let’s assume the index stays where it is now, at 1.88%. The insurance has lost a lot of its value in this case, and may expire worthless, but they’ve already picked up more than the cost of the insurance in the falling index rate for their loan. If the current rate market holds, the true cost of the loan would be 1.88% + 0.15% swaption cost = 2.03% for the hedged index rate plus the 2% loan spread = 4.03% – even better than what they had hoped for in early June, even though their swaption expired worthless!

Swaptions offer a solution to manage future long-term rates. Swaptions offer flexibility, there is one for every budget, timetable, and risk tolerance. The hedger decides on the strike, notional, and exercise date. Unlike a swap, there is no yield maintenance if interest rates fall below the swap rate. If term rates rise above the pre-determined rate, the swaption is cash settled to compensate the hedger. If rates are lower, the hedger locks in a rate below the swaption rate.

The downside? None if rates rise. If they fall, the borrower has paid a known, upfront fee for the swaption that wasn’t needed at the end of the day, so the premium is a sunk cost. If our current reality holds, with 20/20 hindsight, our client would have been better off economically without purchasing the swaption. But they didn’t know that in advance, and they might not be better off emotionally having had to worry about rates more fervently for the entire four months!

Many real estate term loans are through life insurance companies, CMBS, or conduit programs rather than a bank. Generally, these credit facilities are priced using a swap index which matches the term of the loan. Swaptions provide an efficient way to protect against rising rates for future funding needs for loans indexed to swap rates. For deals that will price off Treasuries, the swaption includes a component that may track some of the change in credit spreads over time. Take a look at the life debt portfolio for deals maturing 6, 12, or 18 months out – swaptions might cover you on the refinance.

Whether borrowing at a fixed or floating interest rate, borrowers should always have a defined, “worst case” cost of funds. This pain threshold is the starting point of any financing analysis as well as any conversation about hedging interest rate risk, as it has a huge impact on the choice of hedging vehicle and costs.

In evaluating a swaption as a candidate for your hedge, there are numerous variables which directly impact its cost, and therefore determine its attractiveness; amortization, dollar amount, time to maturity, strike level, market interest rates and volatility to name a few, not to mention the spread charged by the counterparty bank.

Many of our REIT and corporate clients fear a future of higher interest rates and are employing swaptions right now to hedge their rate risk. Curious about swaptions and how they can work for you?

Given the variables and complexities involved, we suggest utilizing an independent professional, like us, to help determine if a swaption makes sense based on your specific goals and objectives. Call on us and put our decades of experience to work for you. 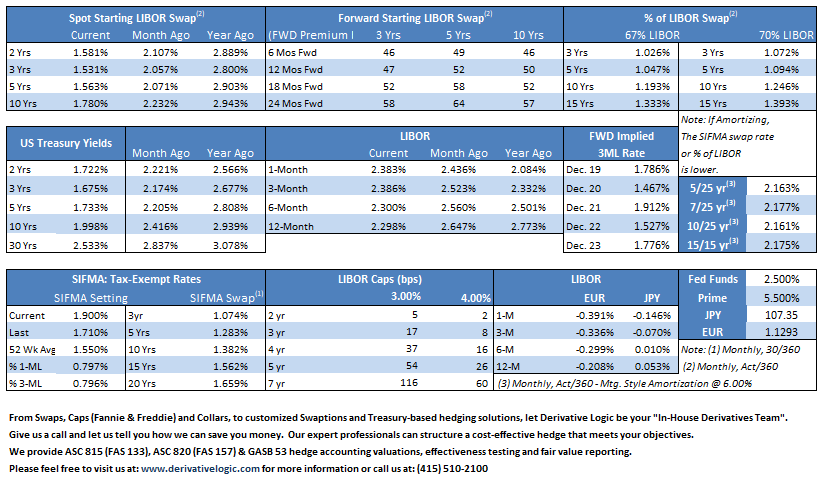