The United States got its first central bank in 1791, thanks to the efforts of Broadway star Alexander Hamilton. The central bank at the time wasn’t popular because of its power (it was the largest corporation in the United States). The same sentiment exists to this day! Hamilton’s bank had a 20-year charter, which wasn’t renewed by Congress. Non-renewal hurt the US when the War of 1812 rolled around and we had limited clearing capabilities for making deposits and settling payments. It’s remarkable that PayPal didn’t come along sooner.

But after another 20-year charter, the Fed went into hibernation again until the banking crisis of 1907 changed public opinion. In 1913, the modern Federal Reserve System was born with government and private sector oversight. The mandate was and has been to promote stable prices, jobs, credit availability and trust, and implicitly be our backstop in the event of catastrophe. Its tools have been interest rates and the money supply mostly. And we are all still here.

Bypassing the Great Depression, the creation of the Federal Open Market Committee (FOMC), 1970’s hyper-inflation and many other salient times, let’s fast forward almost 100 years to the start of our recent banking crisis of 2007 to see how the Federal Reserve has attempted to improve the global economy and where they are now.

After the Bear Stearns subprime hedge funds blew up in the summer of 2007, global confidence began to erode. But it wasn’t until December, with Chairman Ben Bernanke at the helm for almost two years, that the FOMC cut the Fed funds rate by a second 50 bps and offered its first Term Auction Facility (TAF) to ease liquidity constraints. The TAF helped, but not enough to stave off a complete credit crisis. The FOMC cut the Fed funds rate another 400 bps in the next year, helped bail out the banks, AIG, the auto companies, and Fannie Mae and Freddie Mac, but that still wasn’t enough. And so the Fed instituted more programs, like the MMIFF, the ABCP MMIFF, and the CPFF to restore confidence in the short term paper markets. Like the PDCF, TSLF, and the TABSLF to shore up the balance sheets of the country’s largest lenders and primary dealers in the Treasury markets. Like swap lines to global central banks to shore trade partner nations up. Like the MEPRP and the quantitative easing (QE1, QE2, QE3, and QE4) using SOMA to keep pressure on term interest rates at a time when the Fed funds target rate was at zero.

In other words, it got really complicated, and Lehman Brothers and Washington Mutual didn’t make it, but pretty much everyone else did make it. Most of these programs have expired, having successfully achieved their economic stabilization goals. Disclosures (and telegraphing of policy) increased markedly. Economic forecasts with dot plots of where the Fed funds target rate could go, quarterly press conferences, and a schedule for asset sales have all kept us assured that monetary policy will be our friend indefinitely. Bernanke’s tenure blended into Chair Janet Yellen’s stewardship, and now Jerome “Jay” Powell is captaining the Federal Reserve ship.

So What‘s Left To Do?

The Fed and the FOMC are slowly moving back to their standard operating procedures as asset prices have reflated and market participants basically trust the credit of their counterparts again. Markets seem to want a typical FOMC again, too – just shifting the Fed funds target rate and conducting open market operations, but what does the Committee want?

Well, it wants to not own $4 trillion of US Treasuries and agency mortgage-backed securities, that’s for sure, but it will likely take at least 10 years to get back to a balance sheet that is less than 10% of GDP. Since the 10-year Treasury yield has risen about 60 bps in the 18 months since the ‘quantitative tightening’ began, there may be fits and starts in this wind-down process, as well.

To stabilize the world financial system, the Federal Reserve needed to remove all uncertainty for a period of time, by making money freely available to all financial players. But financial markets need some uncertainty; otherwise people over-leverage and get complacent. So while stability brought transparency (press conferences, forecasts), those mechanisms have tied the hands of the Federal Reserve. It basically cannot change the Fed funds target rate at a meeting without a press conference – the market expects actionable changes at only these occasions now. The balance sheet cannot be sold off faster than was previously telegraphed without significant lead time to get the markets comfortable with new supply, change,…uncertainty.

You Know Too Much

Chairman Powell came up with a good idea. We’re going to have press conferences at every meeting starting in 2019, which means the Fed has the capacity to act eight times a year instead of four. The Fed can let markets know its current thesis, but nobody can assume the thesis has to hold for an entire quarter now. The Fed’s core inflation target of 2% has been breached by some indicators, but Chair Powell and the Committee remind us that the target is reflexive, meaning 1.5% inflation and 2.5% inflation carry a similar risk profile for our economy.

The Fed funds target rate has been rising from zero for nearly two years now, at 2% on its way to 3% by this time next year if the economy keeps on chugging. The balance sheet is down to 22% of GDP instead of 25% of GDP – this is slow and steady progress. But we need to get closer to procedural norms too, not just policy norms, and thus some of the uncertainty must come back. Luckily, it seems, this Federal Reserve recognizes this fact, so that the future Federal Reserve will be able to revert to its past tendencies.

We may know less, but we’ll probably be better off as a result. Isn’t that refreshing?

What to do with all this Knowledge

Markets have become too reliant on the Fed’s incessant communication cycle. As the Fed begins to slowly wean us from it, the future outlook for their actions will become murky and subject to great interpretation. Most don’t even know the Fed-induced fog is coming.

What do most market participants lack? Experience and the perspective earned from it, which will prove essential in navigating the future interest rate landscape. With decades spent on the trading floors of the world’s largest banks, we’ve found our way through numerous economic cycles and have the grey hair (or no hair!) to prove it. If one were to visit the trading floor of any bank today, the first thing they’d notice is how young the marketers and traders are. Dodd-Frank hasn’t helped, as its high compliance bar has stifled financial creativity and innovation.

Educating is 99% of what we do – the rest is execution. Hedging without seeking an independent and experienced derivative advisory firm is treading in dangerous waters which will soon become even more treacherous. Without expert guidance, you might as well buy a Magic Eight Ball. 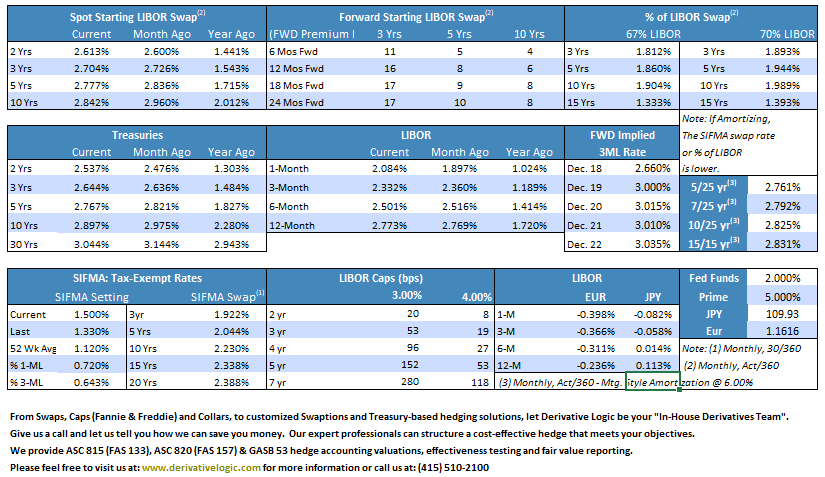