Have you always wanted a crystal ball to tell you where interest rates are headed? Look no further than the yield curve.

In another installment in our Derivatives 101 series, we’ll take a look at an often misunderstood topic that’s thrown around the financial news headlines on a daily basis. How much do you really understand about the Yield Curve? Read on and be the most interesting person at the cocktail party.

What is a Yield Curve and Why Should I Care?

The yield curve is a line that plots the annual interest rates paid on bonds of various maturities, typically ranging from one month out to 30 years. The line or “curve” is a snapshot of interest rates, referred to as “yields” at a set point in time. Yields on longer-term bonds, say 10+ years, tend to be higher, reflecting the risk the purchaser of the bond incurs in holding it to its maturity. The primary risk to bond holders is inflation, and its ability to erode the value of the fixed payments or “coupon” the bond pays to its owner over time. Bondholders hate inflation, and will often bail out of their bond investments at any hint of it in pursuit of other, inflation-friendly investments, like stocks.

Economists and the Fed routinely examine the yield curve for clues on what the market is thinking about  growth and inflation. It’s an important tool for determining where interest rates are likely headed in the future (that’s why you should care). One of the most commonly analyzed yield curves is that of US Treasuries.

Analysts look at the yield curve’s shape or “slope” for insights into future interest rate changes and economic performance. There are four main types of yield curve shapes: 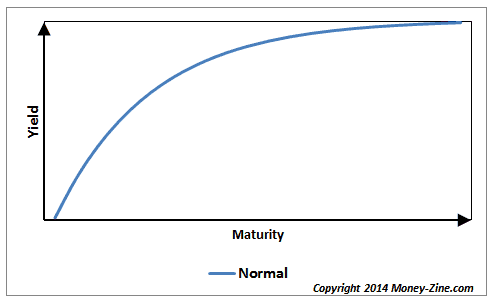 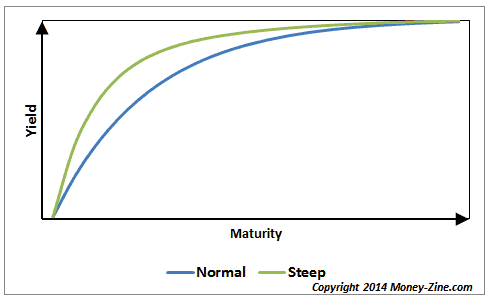 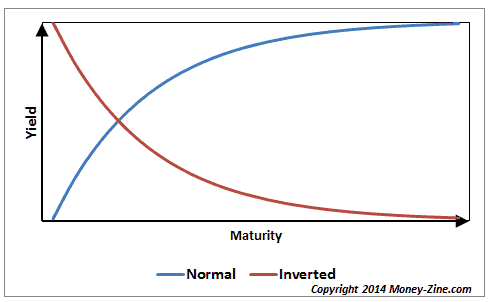 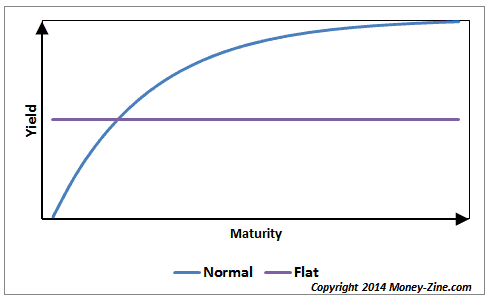 What the Yield Curve for US Treasuries looks like right now and what it implies (crystal ball): 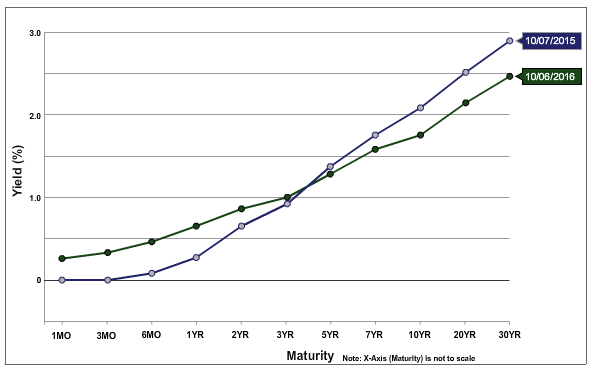 The chart above shows the Treasury curve at two points in time; now (green) and one year ago (purple). We can see that the Treasury curve has flattened slightly over the last year, that is, short term interest rates have increased while longer term ones have decreased. While the curve is still definitely “normal” (short term interest rates being much lower than longer term ones), the difference in short and long term rates has decreased somewhat over the last year. So what’s it mean?

Factors that Influence the Yield Curve

Bond prices and yields move in opposite directions, and different factors influence movements on either end of the yield curve. Short-term interest rates, a.k.a the “short end” of the curve, are heavily influenced by expectations of the Federal Reserve’s future monetary policy decisions. Short-term rates rise when the Fed is expected to raise interest rates, and fall when it is expected to cut rates.

Longer-term interest rates, a.k.a the “long end” of the curve, are also influenced by the outlook for Fed policy, but other factors play a major role in moving long-term yields around, specifically the outlook for inflation, economic growth and investors’ general attitude toward risk.

Slower growth, low inflation, and investor’s depressed appetite for taking risk cause yields to fall. Conversely, expectations of faster growth, higher inflation, and investor’s increasing risk appetite cause yields to rise. All of these factors push and pull simultaneously to affect the shape of the yield curve and influence expectations of future Fed monetary policy decisions.