The Beginning of the End of QE (“Quantitative Easing”). Its been well advertised the Fed will begin unwinding its $4.5 trillion-dollar balance sheet this month, initially by reinvesting a gradually smaller amount of Treasuries and allowing Mortgage-backed securities to mature without replacement in its massive portfolio. As such, October 2017 will go down in history as the official end of the QE era.

The Fed – and everyone else for that matter – is wondering what effect this will have on interest rates across the curve. To answer this question, its best to analyze two factors: the term premium and the state of the the broader, global economy.

Term Premium: What is it and why you should care

Term Premium, as it relates to government bonds, is essentially the additional return investors demand for investing in longer dated bonds versus shorter ones; where the outcome over the long-term is far less certain than that in the near term, and hence, investors demand higher returns from bonds with longer dated maturities. The Term Premium is and has been exceptionally low for years, driven and kept there by two factors: Global central banks QE-driven bond buying and the lack of inflation in the economy. To quantify the Fed’s QE impact on yields, its been widely estimated that the Fed’s policies have made the 10-year Treasury yield artificially lower by ~50 basis points.

A Quick Look in the Rear-view Mirror

Over the past eight years – during which the Fed embarked on several of its bond buying, monetary easing cycles – yields rose when the Fed was in buying mode and fell when it stopped. That’s the opposite of what was expected and totally counter to the inverse relationship between a bond’s price and its yield. As financial text books state, if there’s a major buyer in the market – the Fed – driving up a bond’s price, then the bond’s yield should fall, not rise. So, what happened? 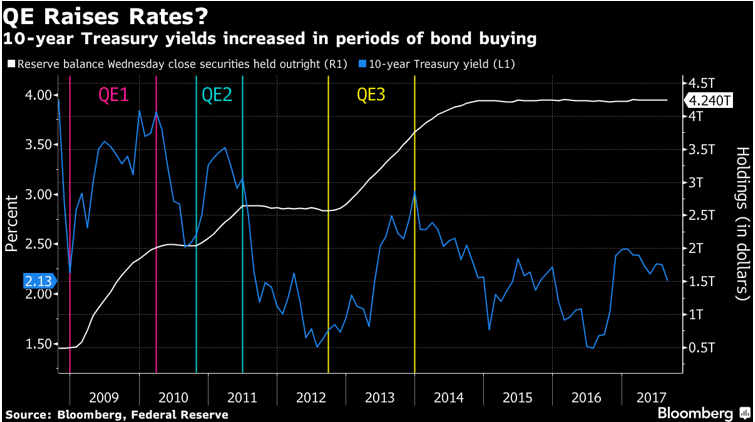 The most basic market participants focus on what the Fed is doing and how its actions effect markets in the simplest cause and affect, text book sense.  Markets are more complicated than that, in that while they care what the Fed is doing, what really matters is how the Fed’s actions influence the economy over the long-haul. The Fed’s QE efforts spurred hope in the markets that faster growth and higher inflation would be around the corner, spurring investors out of Treasuries and into other assets that would appreciate in such a scenario, e.g. equities and real estate. When the Fed wasn’t buying Treasuries – in the periods between QE – markets were left to focus on the doldrums of the post-crises era economy, where high growth and inflation seemed far off.

Now that the Fed is putting its QE/bond buying activity in reverse – providing less stimulus to the economy –  the text book logic would be to assume that long-term rates would rise, but the history of QE tells us just the opposite, that bond yields will fall. Which is correct?

The “Yields will Rise” camp says, in addition to the textbook reasons, the US Treasury’s need to finance the US budget deficit combined with the Fed’s absence as a buyer/financier of new bond issuances will surely drive long-term yields higher. On top of it all, the Fed’s intention to hike again this year and next year will surely equate to higher long-term yields, a larger Term Premium and by definition, a steeper yield curve.

The counter, “Yields will Fall” camp claims that with inflation running well below 2%, an equity market that’s looking stretched, growth that’s respectable but far from its pre-crises levels combined with the yield advantage US Treasuries offer investors over their European and Japanese counterparts, that Treasuries will remain in demand, providing support for prices and a lid on yields. In summary, a static or slightly smaller Term Premium will follow, along with a flatter yield curve.

Lots of variables and conflicting signals, eh? We feel it’s best to focus on the drivers of investor behavior when making interest rate predictions and avoid guesswork on what the Fed will do, as it’s a small part of the equation.

To float or not to float?

Faced with strong opinions on the future direction of interest rates, plenty of financial officers are wrestling with whether to borrow at a fixed or floating interest rate, after witnessing such a low rate environment for so long. While the decision is driven by one’s view, the difference between a fixed and floating rate loan can be one percent or more, a home run if you call it right, but significantly higher interest cost if you’re wrong.

Over the last decade, savvy borrowers have stayed floating as long as possible as the savings offered by floating versus fixing has been significant. One possible solution to the quandary regardless of your view on rates: Borrow floating and hedge a portion of the debt via an interest rate swap, cap or collar. While every borrower has different goals and objectives, floating rate debt should always be part of the financing conversation.

Not comfortable with floating interest rates like LIBOR, Fed Funds or Treasury yields? There are ways to get educated and open up a world of financing alternatives. Ask us how. 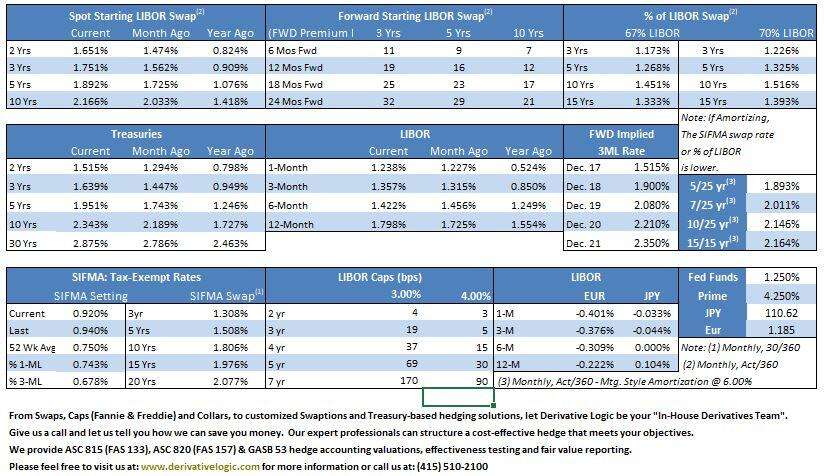